Historically, the underlying cause of ALS has evaded researchers, except in rare genetic cases. But more light has been shone on the disease and the potential of new avenues for drug intervention.

Amyotrophic lateral sclerosis (ALS), commonly known as Lou Gehrig's disease, is a progressive neurodegenerative disease in which the nerve cells in the spinal cord and brain slowly die, leading to impairment of voluntary muscle movement. Patients lose the ability to eat, breathe, walk, and talk as the disease advances. In many cases, patients become completely paralyzed. Approximately 5,000 patients are diagnosed annually in the U.S., according to the ALS Association.

Four years ago, the Ice Bucket Challenge campaign raised more than $115 million for the ALS Association. In turn, it funded more than 200 research projects to the tune of $84 million, resulting in the discovery of five new genes that could be culprits of the disease. New approaches in development provide hope that one or even a few new therapies lie on the horizon.

A cutting-edge clinical trial in ALS commenced this month at Massachusetts General Hospital in Boston. Dubbed a Platform Trial, it will compare five drugs, each from a different company, against each other and a group receiving a placebo. Traditionally, each drug would have had its own clinical trial. But in this case, 30 companies applied to have their drugs evaluated. Biohaven Pharmaceutical Holding (BHVN 0.49%) and Ra Pharmaceuticals (RARX) each had a drug selected for inclusion. 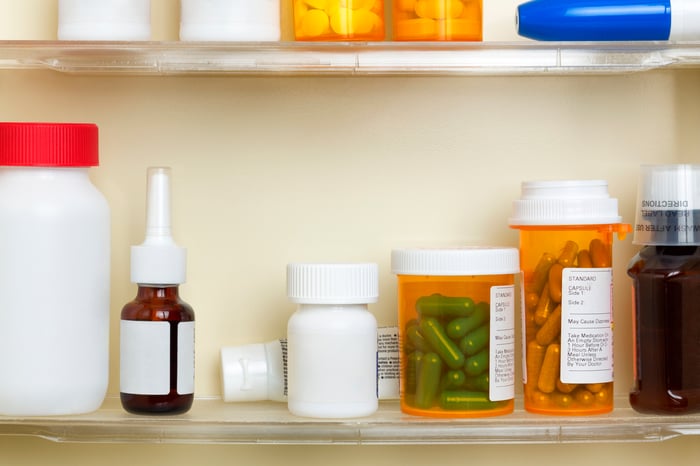 Biohaven's verdiperstat inhibits the myeloperoxidase enzyme which is a key driver of oxidative stress and inflammation in the brain. Originally developed by AstraZeneca (AZN 1.33%) for another rare, neurodegenerative disease called multiple system atrophy, Biohaven licensed the rights to verdiperstat in September 2018. This summer, Biohaven began a pivotal Phase 3 clinical trial with verdiperstat for multiple system atrophy. Oxidative stress and inflammation have been associated with other indications, including ALS and Alzheimer's disease. Based on the drug's unique mechanism, oral tablet formulation, and that it had previously been tested in approximately 250 patients, ALS experts selected verdiperstat for the Platform Trial.

Verdiperstat is one of several promising drugs in Biohaven's pipeline. In the second quarter of 2019, the company filed for U.S. Food and Drug Administration approval of its orally available migraine treatment. Approval could come before the year ends. Biohaven's stock was up nearly 80% earlier this year before the company raised $302.3 million in a June stock offering. Analysts have an average target price of $72, significantly above its current $41 price. Multiple catalysts including several on-going late-stage trials could cause the stock to respond favorably. While verdiperstat is only one small piece of the pipeline, any drug that shows benefit for ALS patients will be a breakthrough.

Ra Pharmaceuticals tries to rein in an over-active immune response

The second drug selected for the Platform Trial is zilucoplan from Ra Pharmaceuticals. Zilucoplan aims to stop tissue damage caused by excessive or uncontrolled activation of the complement system, a key component of the immune system, according to the company. The complement system has been implicated in many autoimmune and inflammatory diseases. Common features between these types of diseases and ALS provide evidence that led to it being included in the Platform Trial.

Ra plans to commence a Phase 3 trial before the end of 2019 with zilucoplan in patients who have generalized myasthenia gravis, a chronic autoimmune and neuromuscular disease. The company claims approximately 60,000 people in the U.S. are affected by this disease. The 12-week pivotal study will likely wrap up before any results on how it performs in the ALS study are known. Patients take zilucoplan as a daily self-injection, but Ra is also developing a patient-friendly once-a-week version.

Like Biohaven, Ra's stock nearly doubled earlier this year only to pull back on the news of a new financing round. In July, Ra raised $140 million to prepare for the upcoming Phase 3 trial. The results from the Phase 3 pivotal trial in myasthenia gravis remain the key driver, making this a stock to keep on the radar for next year.

Platform Trial offers excitement and hope to the ALS community

Approaching a mysterious disease like ALS from different angles and evaluating the drugs side-by-side, in theory, should allow winners and losers to emerge. The Platform Trial organizers suggest additional drugs may be added in the future. That may allow DNL747, a drug that combats neuroinflammation, from Denali Therapuetics (DNLI 2.27%); arimoclomol, an amplifier of the cellular housekeeping machinery, by Orphazyme; tofersen, a gene-silencing drug for a genetic form of ALS, in development by Biogen (BIIB 0.33%); or any of the other drugs that were submitted for inclusion to get their chance to shine.

ALS provides a tremendous opportunity for any company that can demonstrate a benefit for patients with the horrendous disease. Patients and their families, physicians, and regulators would love nothing more than to see new effective treatments approved for ALS. Unfortunately, ALS drug development is littered with failures. However, late-stage drugs from Biohaven and Ra have a strong chance of showing benefit, which could correspond to major increases in their stock prices.

Why Ra Pharmaceuticals Is Skyrocketing Today

Here's Why Ra Pharmaceuticals Inc. Tumbled as Much as 32% Today