Income investors rely on bonds to pay enough interest to meet their financial needs. Yet increasingly, governments across the globe have seen the interest rates they're paying on their sovereign debt fall to unprecedented levels. The yield on the 10-year U.S. Treasury note has dropped below the 1.7% mark, creating a cash crunch for investors who have historically gotten more income from bonds than that. Yet when you ask longtime investors what direction the bond market is likely to move, many see the potential for much lower long-term interest rates.

The Federal Reserve has the responsibility of managing short-term interest rates in the U.S. economy, and its recent moves to reduce rates to a range of 1.75% to 2% have reflected uncertainty about whether economic expansion is likely to continue. Even though conditions domestically remain fairly strong, pressures from overseas are starting to have an impact on the U.S., especially among multinational corporations that get a significant portion of their overall sales internationally. That's shown up in a meaningful decline in long-term interest rates as well.

Yet as low as a 1.7% yield on a 10-year Treasury bond might seem, it pales in comparison to what we're seeing from many other countries across the globe. Some of the world's most important economic powers -- including Japan, Germany, France, and Switzerland -- are selling 10-year sovereign debt at negative interest rates. Effectively, lenders are willing to pay those governments to hold their currency for them. 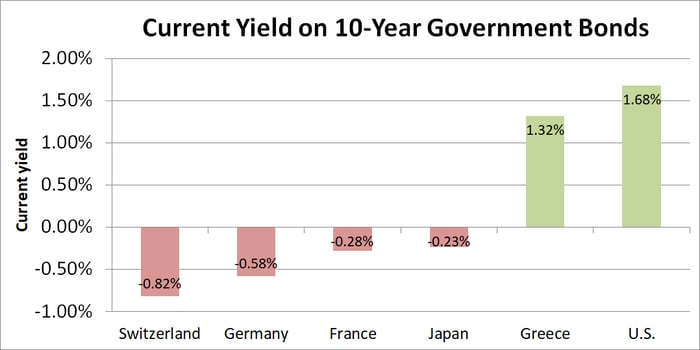 Data source: Bloomberg. Chart by author. As of Sept. 30.

In fact, it's hard to find countries whose sovereign debt has higher yields than U.S. Treasuries right now. Even Greece, which is notorious for its having had a financial crisis in the early 2010s, sports a yield that's significantly lower than you'll find on comparable-length U.S. debt. You have to turn to emerging markets like India, Brazil, and Mexico to find much higher yields of around 7%. However, those countries come with greater risk of default and currency devaluation.

International bond traders find the yields that the U.S. offers right now attractive, and that's driving demand for Treasuries. If the buying continues, yields could fall a lot further than they have already -- and could eventually join Japan and much of Europe in negative territory.