Just when Sonos (NASDAQ:SONO) figured out it needed a low-cost speaker to counter the threat posed by Amazon.com's (NASDAQ:AMZN) cheap Echo devices, Amazon turned around and raised the stakes by unveiling a new high-end speaker that effectively throws the ball back into Sonos' court.

There's probably good reason for Sonos, and even Apple (NASDAQ:AAPL) and Google, to be worried. 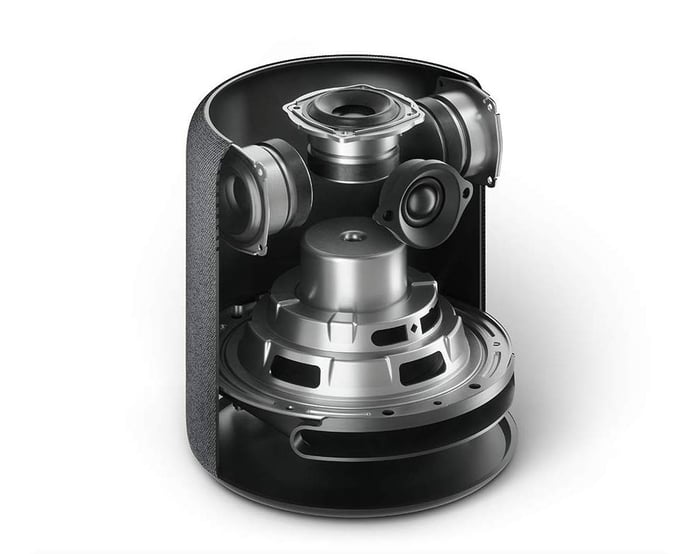 Amping up the quality

The price of an Echo smart speaker was never a point to be argued with, but if there was a knock against the device, it was the quality was only ever just "good enough," as in it is good enough to listen to music with, but it is never going to convince an audiophile to buy one. The Studio changes that.

As you would expect, the Studio comes with microphones -- seven of them! -- that pick up commands for Alexa, but also help to dynamically adjust the speaker to the room automatically.

The speaker, though, was developed primarily to support Amazon's new premium music-streaming service, Amazon Music HD, that it launched a few weeks ago. It costs $13 for Prime members and $15 for everyone else. Subscribers can access 50 million high-definition songs on the service and there are "millions" of songs in ultra HD.

What really sets the Studio apart from a Sonos speaker, the HomePod, or just about any other broad, consumer-focused sound system, is the combination of Dolby Atmos and Sony's 360 Reality Audio that allows the speaker to support 3D audio. The problem is there really aren't many songs available yet that can take advantage of those capabilities. Amazon says it has about 1,000 songs in its library that are being made available on the HD streaming music service.

Of course, technology typically precedes the availability of content, but as more people take up the hardware that can handle it, more content is made to use it.

Two Studios can be wirelessly paired together for stereo sound for home theater systems, and with a 100-watt Echo Sub, the setup can add deep bass response. It can also be paired to a 4K Fire TV.

Everyone's on the run

It's clear why Sonos should be worried, as it was only just getting its feet wet in affordable consumer electronics and now it has a potent challenger to its main sound equipment, but Apple should also be concerned because its HomePod hasn't been a much of a hit and it lost share in the speaker space in the most recent period.

At $199, the Echo Studio also in reach of those who want more than simply OK sound. While $30 smart speakers are probably fine for most people, improvements in technology that drive quality up and at the same time bring the cost down are going to find a much wider audience.

The range that the Echo Studio provides is also a big selling point, even if the availability of music to take advantage of it is quite limited. That, along with the ease of connecting one's entire home theater system together, makes it look as though Amazon is going to grab a sizable piece of the high-end smart speaker market.