Merrill Lynch is bullish, but individual investors should focus on the extreme valuation.

Nearly two years ago, eyeglass and contact lens retailer National Vision Holdings ( EYE -0.39% ) held its IPO at an offering price of just $22. Investor enthusiasm lifted the stock more than 30% to open at $28.75, and within a year, National Vision had passed $45...but it's been all downhill since.

Today, National Vision shares can be had for just $25 and change -- less than they cost on IPO day back in October 2017, and about 50% cheaper than what they fetched a year ago -- and this fact has investment banker Merrill Lynch thinking that National Vision could be an incredible bargain.

But I think Merrill Lynch needs to get its vision checked. Here's why. 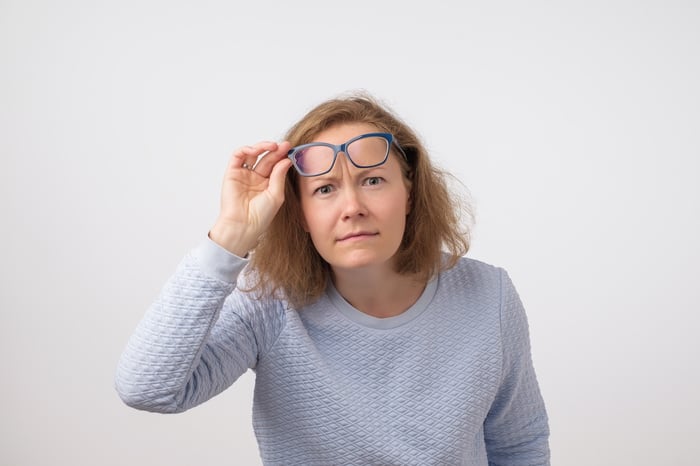 One year ago today, National Vision sold for $43.85 per share, close to the stock's all-time high. But that was before it undermined a modestly successful Q3 2018 earnings report by announcing a secondary offering in which company insiders would unload 12.5 million shares on the market. The stock has never really recovered from that blow, and now trades about 43% below its share price on Oct. 1, 2018.

That's lousy news for investors who owned National Vision back then, of course. But in Merrill Lynch's view, it may be great news for new investors in the stock today.

As Merrill Lynch explains, National Vision's now much lower share price offers an attractive entry point for new investors, as it foresees the stock rallying 12% to move toward the analyst's $28 price target. Praising the company's "unique value proposition, predictable store maturation curve, and marketing campaigns," Merrill Lynch argues that same-store sales growth will continue to shine at National Vision. This, in turn, will attract buyers back to the stock, and boost its share price to something a bit better than the "optical retail group average" valuation of 13 times fiscal 2021 earnings before interest, taxes, depreciation, and amortization (EBITDA).

But is Merrill Lynch right about that?

Take a good, hard look a these numbers

I don't think so, and I'll tell you why not.

Our first clue as to why things may not be so propitious for National Vision as the picture that Merrill Lynch paints for us is the analyst's own target price. A 12% profit potential isn't all that much better than the long-term average annual gain for the S&P 500, which tells you right off the bat that Merrill Lynch may be reaching when it suggests this stock is a better-than-average pick.

Consider, too, the market environment in which National Vision operates. Eyeglasses aren't exactly a high-growth industry, and most analysts who follow the company don't expect it to grow earnings any faster than 15% annually over the next five years, according to S&P Global Market Intelligence.

Attempting to go toe to toe with these giants, last quarter National Vision succeeded in growing its sales 11%...but its profits fell 18%.

As a result, National Vision's profits over the last 12 months added up to a bare $14.4 million, and divided into its $1.9 billion market capitalization, that means that this tiny stock, facing gigantic competition and only modest growth prospects, sells for...130 times trailing earnings!

And Merrill Lynch thinks this valuation is likely to go up 12%, not down?

Suffice it to say that I beg to differ. With weak profits, a still-too-high share price, and a sizable debt load of $893 million (Luxottica has less than half that, despite being 10 times the size of its National Vision), I don't see much hope for this stock at all.