Many of us had a terrible, no-good, bad day on the stock market Wednesday. Investors are nervous about the prospects for the economy, and spooked about the increasingly heated rhetoric coming from the most powerful politicians in the land.

As a result, even the most popular top stocks really took it on the chin today. These three companies, however, suffered more than most. Both sank lower than even the most battered stock indexes. Let's examine these victims. 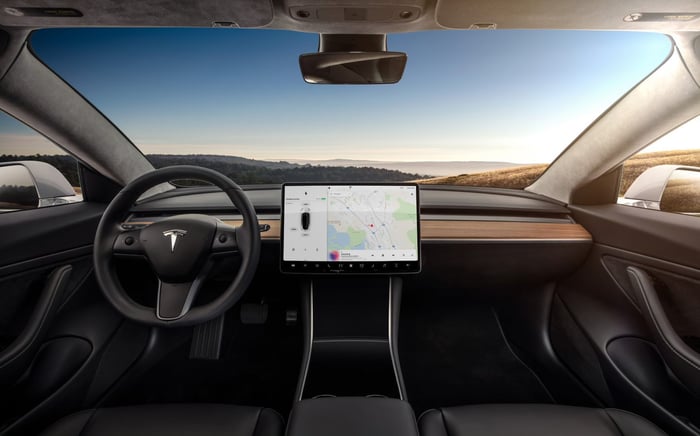 Although Tesla (NASDAQ:TSLA) stock did relatively well during the trading day, it was crushed in after-market action, down 4% as of this writing. The reason why is clear and obvious: Following market close, it released its latest production and delivery numbers.

At first glance, those figures were impressive. In the third quarter, the company produced 96,155 vehicles and delivered roughly 97,000. The latter was a new quarterly record.

It wasn't, however, up to expectations. On average, analysts were anticipating 99,000, while CEO Elon Musk's ambition was an even 100,000. No investor likes when one of their companies misses a key target, and since Tesla is a volatile, knife's-edge operator, the market can react strongly to such news. This is what seems to be the case here.

If I were considering Tesla stock, though, I wouldn't trade off the current or recent delivery/production numbers. The carmaker has found its niche, and in many ways it's become the poster boy for alternatives to the internal combustion engine.

Basically, an investment in Tesla is a bet on Musk, a very hands-on manager with lofty ideas and soaring ambitions. If you feel he's the kind of guy who can fulfill these, you should go along for the ride and buy on current weakness. Personally, I have my doubts, but to each his or her own.

In a race, there are no prizes for coming in at the rear of the pack. That's what is happening with online securities brokers TD Ameritrade (NASDAQ:AMTD) and E*Trade (NASDAQ:ETFC), which announced they were dropping their trading commissions to every consumer's favorite price, $0.

This closely follows a similar move made by Charles Schwab (NYSE:SCHW), which on Monday announced it was entirely eliminating its own commissions. It's not the first brokerage to kill such fees, but up to that point it was the most influential.

A shocked and surprised market rid itself of E*Trade and TD Ameritrade with a massive sell-off, with the stocks down 3.6% and 3.3%, respectively, at market close. Comparatively speaking, today's trading was far less damaging to the stock prices.

The fundamentals of both will, obviously, take a hit from the lost revenue. But this is 2019, not 1989, and brokerages aren't so heavily reliant on the take from commissions anymore.

I'm bullish on the brokerage sector generally, as a still-thriving economy should support continued strong activity. I also like TD Ameritrade specifically -- heck, I'm a longtime shareholder -- because the company has proven nimble and clever in staying competitive as a brokerage and finding ways to keep growing.

That's no mean feat in a business with a great many bread-and-butter services offered by a host of rivals. So personally, I'm holding onto my shares. However, those considering TD Ameritrade (or E*Trade, while we're at it) as an investment might want to wait and see how the company makes up for the sharp and sudden loss of a classic revenue stream.