McCormick once again demonstrates the value of steady, incremental progress.

On a day when the overall market was characterized by red ink, shares of the venerable consumer staples stock finished roughly 7% higher against their Monday close. Below, let's look at four key details that illuminate the type of steady and seemingly unspectacular quarterly progress McCormick's shareholders have learned to savor.

McCormick's gross margin widened by 100 basis points over the prior-year quarter, to $40.6%, which management attributed to improved product mix and cost efficiencies delivered by its multiyear "comprehensive continuous improvement," or CCI program. Each year, McCormick sets a seemingly modest CCI goal. This year's task is to deliver $110 million in cost savings, which equals the rough average of the last four years of savings.

2. "Below the line" efficiency

While CCI is primarily focused on gross profitability, management applies principles of the cost savings program to expenditures that are "below the line," that is, items that appear below the gross profit line on the income statement.

This quarter, selling, general, and administrative expense (also referred to simply as "SG&A") made up 20.9% of sales, after comprising 21.5% of sales in the comparable quarter. Again, while we can easily characterize this as a modest improvement, it's important to note that McCormick compressed its SG&A as a percentage of sales by 0.6% even as sales rose versus the prior-year quarter.

I've discussed recently how McCormick is striving to generate more efficiency from its marketing efforts by holding its 2019 marketing spend to 2018 levels, while wringing greater impact from each marketing dollar. 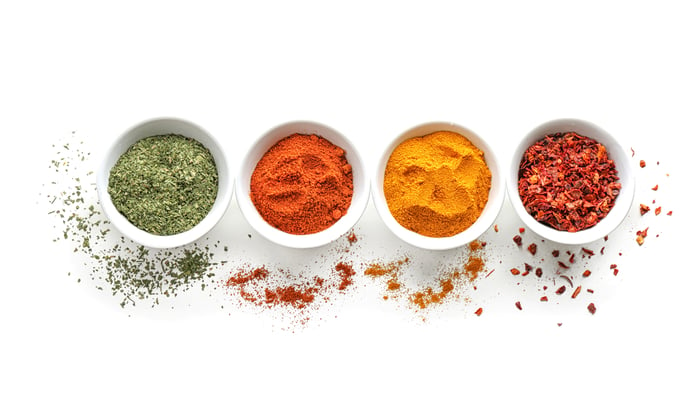 3. The impact of a few hundred million dollars

Last quarter, I observed that McCormick is actively reducing the debt it added to its ledgers when it acquired the French's Mustard and Frank's RedHot Hot Sauce brands from Reckitt Benckiser in 2017. This quarter, total debt of $4.6 billion on McCormick's balance sheet is roughly $340 million less than the end of the comparable prior-year period.

With total shareholder equity of over $10 billion, what's the impact of a few hundred million dollars of balance sheet debt reduction? For McCormick, the lighter debt load resulted in a reduction of $4 million in interest expense this quarter, or about 2% of total net income. Of course, management's stated goal is to pare down borrowings so the company can reload on strategic acquisitions, but the steady cadence of debt repayments is also benefiting earnings per share each quarter.

4. A slight bump in consumer growth

McCormick's business is broken into two operating segments: its consumer segment, which primarily sells spices and condiments through retail grocery channels, and an institutional and foodservice industry-focused "flavorings" division. This quarter, the consumer segment's year-over-year sales increase of 3%, to $794 million, absorbed the flavorings business's 2% top-line decline (to $535 million). Consumer sales actually grew by 4% on a constant currency basis.

This slight bump up in consumer sales was enough to lift total revenue by 1% for the quarter, to $1.33 billion, or 2% in constant currency terms. Management attributed strength in this segment to no less than four factors: product innovation, category management, successful brand marketing, and private-label sales. Not to belabor an overriding theme, but incremental improvement in each of these areas made the difference between a flat quarter and one that was marked by slight revenue expansion.

In the CPG investing space, reliable and regular growth draws buying interest over time, and judging by recent stock price appreciation, McCormick apparently has its share of advocates.