Bed Bath & Beyond (NASDAQ:BBBY) reported another quarter of sales declines after the closing bell on Wednesday, causing shares to trade down after hours and into Thursday. While the home goods retailer did beat analyst estimates on a few metrics, it still has a lot more to do to right the ship.

The discount retailer is facing some real headwinds. Retailers that are succeeding right now have more diverse product lineups. Simply targeting home goods isn't enough on its own to bring consumers to stores, especially in the era of e-commerce. 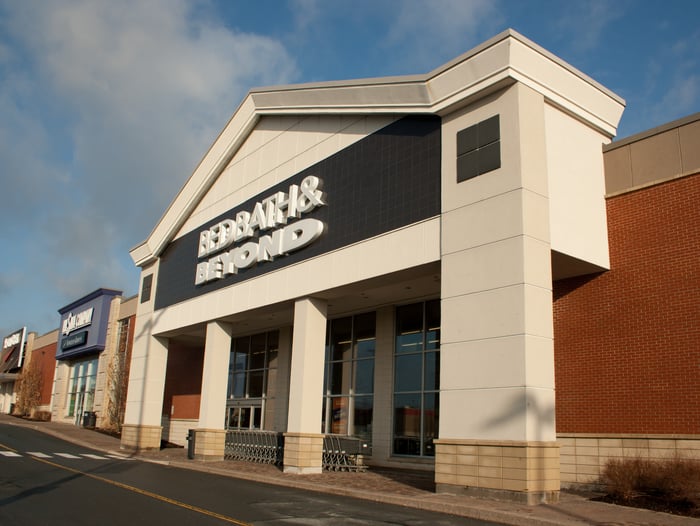 Revenue declined roughly 7.3% year over year in the second quarter to $2.72 billion. Comparable-store sales declined 6.7% year over year. Through the first half of the fiscal year, net sales are down 6.9%. Second-quarter gross margin was 26.7%, versus 33.6% in the same period a year ago. The profits were not enough to cover sales, general, and administrative expenses, and Bed Bath & Beyond reported operating losses of $182.26 million, compared to operating income of $78.85 million a year ago.

Net loss for the quarter was $138.8 million, which broke down to a loss of $1.12 per diluted share. Management attributed the losses to impacts from the "first wave of transformation initiatives." These initiatives include severance costs that stemmed from job cuts and the writing down of inventories. Bed Bath & Beyond also noted store impairment charges. Excluding these items, the company reported adjusted earnings of $0.34 per diluted share, which topped analyst estimates of $0.27 per share.

Overall, this was another indicator of Bed Bath & Beyond suffering through a slow decline. Since hitting its 52-week high of $19.57 a share in early April, 48% of shareholders' equity has been wiped out, bringing book value right in line with the stock's market capitalization of $1.3 billion.

It seems likely that the company will keep incurring these impairment charges as it attempts to close out the weak areas of the business and revamps strong-performing locations. Guidance for fiscal 2019 anticipates earnings per diluted share of $2.08 to $2.13, with net sales projected at $11.4 billion; that would give the stock a forward price-to-earnings ratio of roughly 21.5. On the basis of the price-to-book ratio, the stock is in line with the overall market average. But on the basis of earnings, shares are not attractively priced.

Where does BB&B go from here?

Can Bed Bath & Beyond make a move to revitalize parts of the business? It certainly has the capital to do so, but whether it will is another story. The retailer is reportedly set to announce a new permanent CEO soon. Hopefully, that will give us a little clearer picture of what kind of management style we'll see moving forward.

Interim CEO Mary Winston has been holding the reins while the company seeks a permanent executive, and the lack of a clearly defined vision at the helm has probably been detrimental to overall goals. That uncertainty needs to end soon. In the company's earnings call, management laid out four main priorities:

While these sound good in a quarterly presentation, they're rather generic points. I want to see a CEO come in with a real initiative and a specific course of action. Are they going to sell major assets on the balance sheet? What will they do with various lease agreements for stores that are set to expire? These are the kinds of questions that investors need answers on. How Bed Bath & Beyond is going to get back in the game against rivals is also a big question that needs a response.

The company is still dealing with the competition of larger, more diverse retailers like Walmart, Target, and Amazon, and I question whether any amount of maneuvering can make it competitive against these value stocks. There seems to be little value in paying that price-to-earnings premium for the stock of a company with declining sales.

The company had $12.03 billion in sales last year, so current guidance isn't anything to write home about. With plans for 60 store closures this year (up from earlier estimates of 40 store closures), it does seem that Bed Bath & Beyond is making the hard choices, and attempting to cut its losses on weak locations. Sadly, the benefits of these moves don't seem to be reflected in the bottom line for the foreseeable future. If the balance sheet deteriorates further, it's pretty clear the share price will follow.