Please ensure Javascript is enabled for purposes of website accessibility
Log In Help Join The Motley Fool
Free Article Join Over 1 Million Premium Members And Get More In-Depth Stock Guidance and Research
By David Butler - Oct 3, 2019 at 7:22AM

While the client growth has been exceptional, the costs of scale, coupled with weak guidance, make one wonder whether the stock is really that attractive.

Stitch Fix (SFIX -5.22%) is an excellent example of top-line growth versus actual value to shareholders.

The e-commerce clothing service that sends you monthly outfits is doing exceptionally well at growing the scale of its business. On the other hand, the investment in that growth isn't doing much for actual earnings.

That's the primary reason the stock is down following its fiscal Q4 earnings release on Tuesday.

User growth was the big winner

The positives for the quarter were customer growth and the subsequent increase in sales revenues. Overall clients for the fiscal fourth quarter increased 18% year over year to 3.2 million. Consequently, Stitch Fix's revenue grew a strong 36% year over year to $432.1 million. As a percentage of revenue, gross profits were relatively stagnant year over year. Gross profits of $190.36 million were 44% of quarterly revenue. The breakdown of that gross profit figure is another story.

Operating income took a big hit, falling 78% year over year to $1.75 million. Net income of $7.18 million was only possible due to things like tax benefits and interest income. On a per-share basis, earnings did beat estimates of $0.04 per share; but $0.07 per diluted share is still a steep decline from last year's $0.18 in earnings. 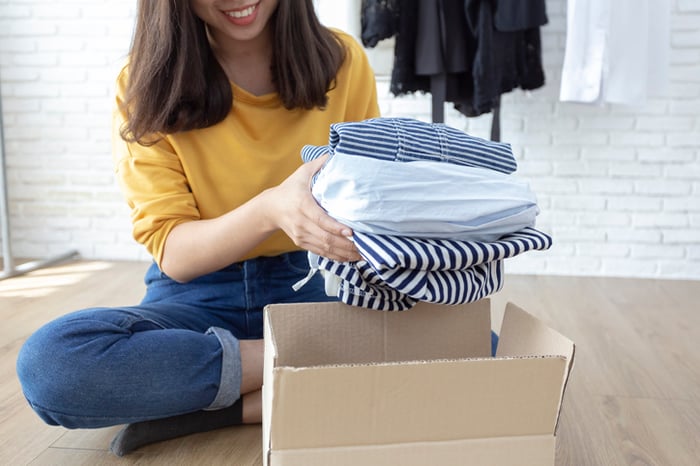 The future is still not certain for Stitch Fix, and the stock's performance on Wednesday reflected that. The company put a lot into selling, general and administrative (SG&A) expenses, and I do understand the cost of investing in future expansion. That said, forward guidance doesn't explain how these investments are going to pay off yet.

Forward guidance for Q1 2020 includes continued strength in revenue growth but rather weak expectations for EBITDA (earnings before interest, taxes, depreciation, and amortization). Net revenues are expected to grow around 20%, while EBITDA could decline by 1.6% to 0.9%. On an adjusted basis, Stitch Fix anticipates EBITDA growth of 1.4% to 2%.

The company's main reasoning for light guidance revolves around seasonality and lower marketing spending. Stitch Fix said it does better in the summer months when the company can move cheaper -- and lighter -- products (T-shirts versus sweaters). Regarding the marketing, Stitch Fix stated that they "spent less on marketing in late Q4 2019, which meant we had fewer clients to contribute to revenue at the start of Q1 2020."

The guidance for Q1 2020 factors in new marketing, as well as the continued investment in the expansion into the U.K. It's worth noting that the company did point out that it expects EBITDA to return to positive growth in the second fiscal quarter.

The main concern here is the lack of a barrier to entry. Stitch Fix doesn't really own a product; it has an idea --  one that can be replicated by pretty much anyone with the capital. What's to stop a company like Amazon (AMZN -0.77%) or even a retailer like Kohl's (KSS -5.14%) from trying to get into the game. Anyone with an online digital presence could fashion its consumer experience into something similar. In fact, Amazon already has Personal Shopper, a service in which you list your preferences and tastes and receive clothing matching the criteria. This screams copycat, and investors should be concerned. Amazon has a far bigger reach than Stitch Fix and could undercut the latter on pricing.

The second concern is cost. Shipping is not cheap, as has been demonstrated in the low-margin businesses of online entities. Some have wisely pointed out that Stitch Fix's entry into the U.K. market provides a much smaller, denser territory in terms of deliveries. That's very true, but the pricey nature of shipping is still a factor.

Down 11% Wednesday, the stock is falling toward its IPO levels. I'm not necessarily surprised about the low earnings and guidance. This kind of business requires a lot of effort to build out its infrastructure and needs storage, logistics, and online management all rolled into one. If you believe in the long-term ability of the company to do that profitably, then the stock is definitely available at sale prices. But if you want to see real, meaningful proof of concept before investing money, Stitch Fix doesn't seem to have that yet.

John Mackey, CEO of Whole Foods Market, an Amazon subsidiary, is a member of The Motley Fool's board of directors. David Butler has no position in any of the stocks mentioned. The Motley Fool owns shares of and recommends Amazon and Stitch Fix. The Motley Fool has a disclosure policy.