Please ensure Javascript is enabled for purposes of website accessibility
Free Article Join Over 1 Million Premium Members And Get More In-Depth Stock Guidance and Research
By Rich Duprey - Oct 4, 2019 at 10:00AM

The home-goods retailer still can't figure out how to get customers in the door.

The write-offs may have been smaller at Bed Bath & Beyond ( BBBY 4.03% ) in the second quarter, and adjusted earnings may have beaten Wall Street's expectations, but the results show why the activist investor shake-up at the home-goods retailer is still likely a case of too little, too late.

Bed Bath & Beyond reported sales fell 7.3% to $2.7 billion as comparable sales continued disintegrating, dropping 6.7% from the year-ago period and worse than the 5.6% decline analysts predicted. 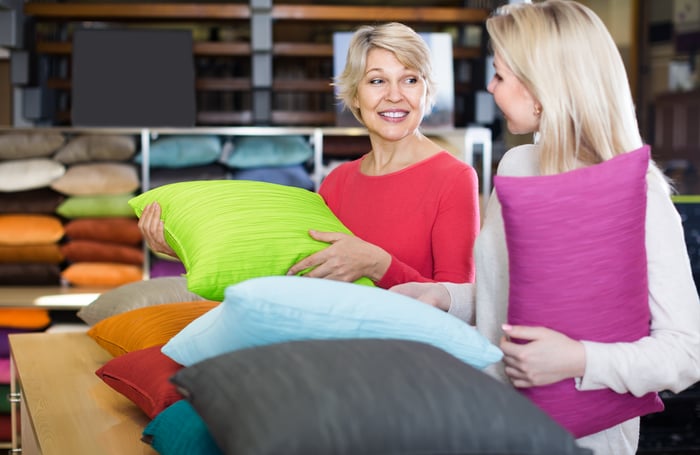 While the $245 million worth of impairments it took this quarter were smaller than those from the previous two quarters, which together totaled almost $1 billion, it was still a substantial writedown of goodwill and inventory equating to $1.46 per share in earnings and caused it to report a GAAP loss of $1.12 per share.

Getting costs under control

Bed Bath & Beyond's activist investors have a difficult task before them, despite being able to clean house in the boardroom and effecting change in the executive suite. Although it says it is close to announcing a new CEO to take the helm, a move that will undoubtedly give the stock a small bump when it occurs, the business won't be in any better position.

The retailer hasn't reported a single quarter of higher comparable sales since the fourth quarter of 2016 and the latest results indicate the deterioration is accelerating, but there are a lot of moving parts now to Bed Bath & Beyond -- not all of them bad -- that will cloud how to look at the business.

On the plus side, the cost structure of the company is being overhauled:

But cost savings only go so far, and as it reduces its overhead, Bed Bath & Beyond needs to complement that with sales growth. It's hoping the back half of the year sees the first fruits of that effort ripen, but it will be a delicate balancing act.

Second-half results will not be what they seem

Bed Bath & Beyond intends to clear out $1 billion worth of old inventory over the next 18 months, but will begin by marking it down and selling it off now. While that will likely boost sales in the near term, it will also pare down margins and it needs to be careful not to cannibalize holiday sales.

The company also has a calendar shift to contend with as the third quarter this year will include Thanksgiving and Black Friday sales, but not Cyber Monday and the week that follows, which now falls into the fourth quarter. All of those sales were in the third quarter last year, so the comparison will be weaker.

It will also have to expense all the  marketing dollars it spends for the holidays in the third quarter, though the benefit will mostly fall in the fourth. That means the fourth quarter's results will see more of an earnings contribution than it typically does.

The problem is, there's no guarantee all of this will generate much more in sales. Bed Bath & Beyond's ubiquitous blue-and-white discount coupons are still going out in the mail (and they're doing more digital marketing, too), but customers aren't responding to them like they used to. Even digital sales fell in the second quarter.

Moreover, Bed Bath & Beyond still feels the need to placate shareholders while it goes through this turnaround. Last quarter, it raised its dividend 6.7% to $0.17 per share, and this quarter it spent $16 million buying back 1 million shares. It's money that could be better spent fixing the business and a reason companies often go private during a turnaround so they don't have to mollify Wall Street.

Now is not the time

Bed Bath & Beyond did end the quarter with $1 billion in cash, which has always been one of its strong points as it is able to throw off a lot of free cash flow. It's why it's not in any danger of going bankrupt.

But that doesn't make it a good investment now. Management needs to prove that beyond the cosmetic changes of realigning its cost structure, it can actually get customers coming in the door for more than just inventory liquidation sales.