Bed Bath & Beyond (NASDAQ:BBBY) has written off almost $1 billion due to impairment charges related to its goodwill and brand over the first six months of its fiscal year. There should be more pain on the way in the third quarter, too.

Despite having dramatically cleaned house by ousting the home goods retailer's board and CEO, its private equity investors still have a long way to go before they can hope to see evidence of a turnaround taking hold. Although they're making changes, it's not anything investors can expect to see results from soon. 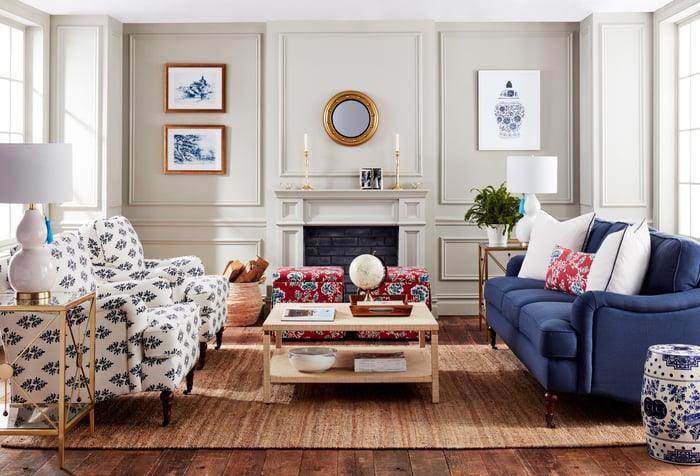 The consumer discretionary retailer is making a big bet on private-label goods, looking to launch as many as six in-house brands. Earlier this year it introduced Bee & Willow Home, a mix of rustic and modern pieces for each room, and now it will offer a collection of merchandise under its One Kings Lane e-commerce brand.

The retailer had acquired the dying One Kings Lane flash sale site for less than $12 million in 2016, but didn't do much with the specially commissioned, limited-edition items from emerging fashion and home designers the site offered.

Now it will be making available on the websites of both Bed Bath & Beyond and One Kings Lane a mix of traditional and modern home furnishings at "surprisingly accessible prices," and then will bring the items into the retailer's stores next spring.

Cutting costs is an imperative

The purpose of this push into private-label home goods is to differentiate itself from the competition. In-house brands allow retailers to set themselves apart from rivals since the brands are exclusive, and they can often make better margins on the products. Yet there is just as much risk in the process.

Consumers may look for national brands because of the quality associated with a name brand, though that might not necessarily be the case in the home goods market. And while some home furnishings retailers such as Ethan Allen do carry a certain cachet (and price tag), the exclusivity of One Kings Lane or Bee & Willow likely won't mean all that much to consumers.

Beyond private-label merchandise, interim CEO Mary Winston has also laid out a plan for a "rapid refresh" of 160 stores in time for the holiday shopping season as well as an "aggressive" elimination of as much as $1 billion in excess inventory over the next 18 months.

So is shrinking its size

Perhaps of equal importance is the strategic review underway of its portfolio of store concepts, including buybuyBaby, Chef Central, Cost Plus World Market, and PersonalizationMall. There's even the possibility the entire company could be up for sale, as Bed Bath & Beyond reportedly received an unsolicited bid to buy the whole shebang.

Assuming the retailer remains independent, a key component of controlling costs will be reining in its sprawling footprint by closing underperforming stores.

At the end of the second quarter, Bed Bath & Beyond operated just under 1,000 eponymous stores, 277 Cost Plus stores, 126 buybuyBabys, 81 Christmas Tree Shops, 55 Harmon Face Value locations, and two One Kings Lane stores. There was a time when the retailer thought the market could support 1,300 Bed Bath & Beyond locations; that's obviously no longer the case.

A better outlook is still a long way off

All of which means investors shouldn't hope for much when the retailer reports earnings on Oct. 2. Analysts anticipate less than $2.8 billion in sales, a near-6% drop from last year, generating earnings of $0.29 per share, 20% lower than the $0.36 per share earned in the year-ago quarter.

Bed Bath & Beyond has lost half its value from its 52-week high, and it's unlikely to gain much (if any) ground until the many changes management has undertaken prove they have a chance of working.