This struggling telecom is more of a lottery ticket than an investment.

Sprint' s (S) merger with fellow wireless telecom T-Mobile US (TMUS 0.54%), a year and a half in the making, is still up in the air. Buying Sprint shares today is a firm bet that the deal will be approved and consummated in its current form. Anything short of that would be downright bad news for Sprint shareholders.

You really don't want to own Sprint in the long run

This is clearly the weakest of the four major American wireless networks, more likely to lose subscribers than gain them in any given quarter. Dissatisfied with Sprint's particular combination of service quality and plan prices, subscribers leave Sprint more often than they do from any of the other majors, forcing the company to rely on expensive promotions to keep their subscriber counts reasonably stable.

T-Mobile isn't trying to buy a strong competitor with a large and high-quality customer roll. Adding Sprint's 54 million subscribers to T-Mobile's 83 million customer won't hurt, of course, but this deal is really all about Sprint's valuable collection of radio spectrum licenses. Cancel the merger and watch Sprint's long slide into oblivion continue. 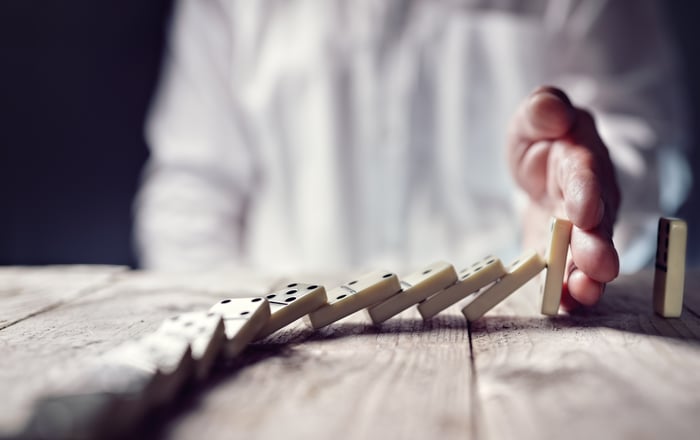 The merger deal calls for each Sprint share to be converted into 0.10256 T-Mobile stubs. Since T-Mobile is trading at roughly $78 per share today, that works out to a final deal-powered value of $8 per share.

But this ain't no sure thing. Sprint's stock is fetching just $6.11 per stub right now, some 24% below the promised buyout value.

On the upside, this discount gives you a chance to buy Sprint stock today and watch it rise in value if and when the merger takes effect -- assuming, of course, that T-Mobile's share prices hold steady.

On the other hand, this sharp discount serves notice that investors are worried about the regulatory outcome here. The Trump administration has long been sending mixed signals about its willingness to approve this deal. Recent moves have generally pointed in a positive direction, but you just never know what Trump or FCC Chairman Ajit Pai might say or do next. So, investors are taking a big risk here, weighing the promise of a 25% value boost against the far darker conclusion of owning a stand-alone Sprint on its own merits.

If you want to take advantage of a positive merger outcome, I would point you toward T-Mobile's stock instead. That ticker would also see an impressive jump when the final John Hancock is placed on the merger documents. It's also a far more solid long-term investment than Sprint if the deal is stopped at the goal line.

Comparable rewards, much less risk -- what's not to love? T-Mobile is a better investment than Sprint right now.