Please ensure Javascript is enabled for purposes of website accessibility
Log In Help Join The Motley Fool
Free Article Join Over 1 Million Premium Members And Get More In-Depth Stock Guidance and Research
By John Ballard - Oct 6, 2019 at 9:23AM

These chain operators have the ingredients to beat the market, and each comes with dividends on the side.

We are 10 years into a bull market, which has pushed many popular restaurant stocks to high valuations. Given that, the best approach for investors looking to buy into the sector today is to look for well-run businesses that are delivering consistent same-store sales growth and earnings growth that looks strong enough to support their stock valuations. 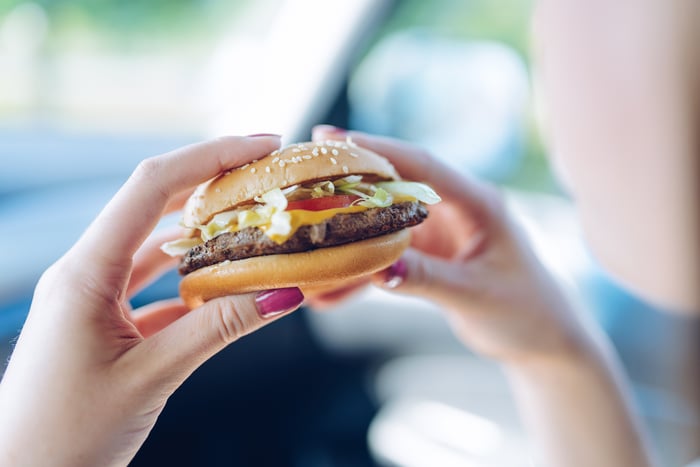 Restaurant Brands International is one of the largest quick-service restaurant operators in the world with over 26,000 restaurants globally. More than 18,000 of those are Burger Kings. RBI was formed in 2014 as a holding company of Burger King and Tim Horton's. In 2017, it acquired fried chicken chain Popeyes for $1.8 billion, which enhanced the company's global expansion strategy.

The company is effectively controlled by the Brazilian investment firm 3G Capital, which is famous for the 2008 Anheuser-Busch Inbev merger,  and also partnered with Warren Buffett's Berkshire Hathaway on the Kraft Heinz merger. 3G Capital owns 41% of Restaurant Brand's outstanding shares.

Consistent with 3G Capital's modus operandi, RBI has swung for the fences, delivering profitable growth while expanding internationally. Over the last three years, revenue and earnings from continuing operations have increased by 32.6% and 87.5%, respectively, and the stock is up 59%.

Management sees the potential to expand to as many as 40,000 restaurants in total across Tim Horton's, Burger King, and Popeyes. That would happen against a backdrop of a growing quick-service industry. The company's core markets of serving coffee, bakery goods, chicken, and burgers are expected to grow at mid-single-digit percentage rates through 2023.

Burger King and Popeyes have grown their comp sales consistently in the low-single-digit range; Tim Horton's has not. The coffee and bakery chain has been inconsistent, reporting negative comps at times. But RBI's adjustments in marketing and service quality seem to be paying off -- comps shifted to positive territory in the most recent quarter. And Burger King and Popeyes' comps were 3.6% and 3%, respectively, in the second quarter, up from 1.8% and 2.9% in the year-ago quarter.

Analysts expect the company's earnings to grow at an annualized rate of 19% over the next five years as it continues to open new restaurants and maintain cost discipline. The stock's forward price-to-earnings ratio of 26 is not that expensive relative to growth expectations. The stock also pays an above-average dividend that is currently yielding 2.79%, unusually high for a growth stock, and a reflection of its shareholder-friendly management team.

A well-nurtured garden of restaurants

Darden is one of the largest full-service restaurant operators, with more than 1,700 locations across the U.S. and Canada. It owns Olive Garden, LongHorn Steakhouse, Cheddar's Scratch Kitchen, The Capital Grille, and Bahama Breeze, among others.

The company's leadership changed in 2015, and since then, the stock has nearly doubled. New management came in with a strategy to cut costs and improve profitability. While the prior team found profit growth hard to come by, earnings have increased by 118% in the last four years.

In the first quarter of its fiscal 2020, Darden's largest chains -- Olive Garden and LongHorn -- continued to post gains in sales and profits. Its smaller chains didn't perform as well, with declining comps, but Darden still reported overall growth of 3.5% in total sales to reach $2.13 billion for the quarter.

Darden is taking market share in the casual dining space and should continue to outperform many of its peers. Management is calling for mid-single-digit percentage sales growth for fiscal 2020, with 1% to 2% growth in comps, and EPS growth of 11% at the midpoint of guidance. The stock trades for a forward P/E ratio of 18 and its dividend is yielding 2.71%.

The top pizza brand in the world

Domino's Pizza is the largest pizza delivery chain in the U.S. and commands the top spot in market share in the quick-service pizza category worldwide. Over the last five years, earnings per share have more than tripled, which has propelled the stock upward by 215%.

The share price is slightly down on the year, as Domino's turned in softer sales growth than management had forecast. Over the next three to five years, management is targeting comp sales growth of 3% to 6% per year. However, in the last quarter, U.S. comps were up 3%, while international comps increased by just 2.4%. That continued a streak of 33 consecutive quarters of U.S. comps growth and 102 straight quarters of international comp growth, but investors were looking for more.

In part, the company's weakness can be attributed to a more competitive environment, but some of its pains are self-inflicted. Management has adopted a strategy it calls "fortressing," which involves opening new stores in closer proximity to existing ones. That's been a headwind to same-store sales growth recently. However, the purpose of the strategy is to reduce the average distance between Domino's stores and its core customers, which will improve delivery times. Management expects that will save costs and improve profitability over the long term.

On the digital front, Domino's is having great success with its app and its online channel. Its Piece of the Pie rewards program is enhancing customer loyalty and driving digital sales higher. There are more than 20 million active users in the program. Last year, more than 65% of Domino's U.S. sales were generated through digital platforms.

The recent softness in comp performance has brought the stock's forward P/E ratio down to 25.7, which looks high at first glance, but not once its growth assumptions are factored in. Analysts expect Domino's to grow earnings at an annualized rate of 14% over the next five years. The stock also pays a dividend that's yielding 1.03%.