These bellwether companies' earnings reports will provide strong indications about the direction of the U.S. economy -- and the global outlook as well.

Where is the global economy headed? Are we at the start of a nasty and protracted recession, or will this just be a natural cyclical slowing, to be followed fairly soon by a cyclical reacceleration? If it's the former, then the stock market could be headed for a long slump, but if its the latter scenario, history suggests that investors will want to buy on the dip. 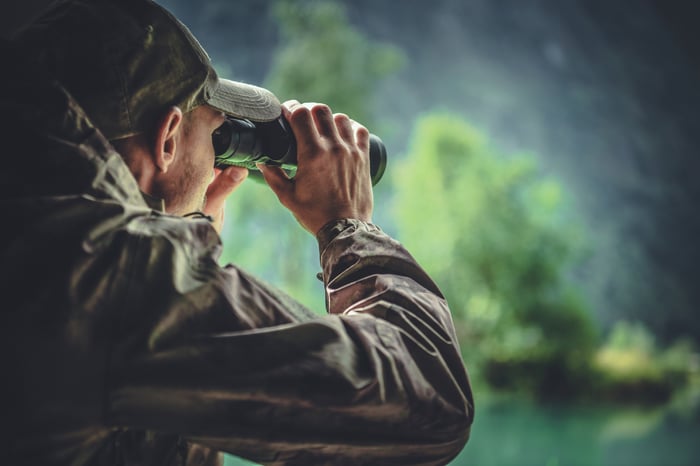 As one of the biggest U.S. railroad companies, CSX is a key bellwether of the country's economy and, unfortunately, its management isn't likely to have great things to say about it in the third quarter. For example, let's take a look at the carload data from its second quarter and the latest data on rail traffic from the Association of American Railroads (AAR).

As you can see below, the year-to-date industrywide trends are worse than CSX's second-quarter results, and the year-over-year data from the last week of September was weaker than both. Based on this data and other leading indicators, it's clear that the U.S. economy is weakening, and you can expect CSX's third-quarter report to reflect this.

The question is whether the market is set to stabilize in the fourth quarter or head down further? Coal is in a secular decline, and agriculture (grain) has its own dynamics relating to the trade dispute, so probably the key commentary from CEO James Foote will be on intermodal traffic. As railroad investors already know, intermodal simply refers to the cargo in standardized shipping containers, which can be shifted more easily between multiple modes of transport -- for example, from container ship to railroad car to tractor-trailer.

To be fair, the drop in CSX's intermodal volume is partly down to a conscious decision to reduce lanes due to its adoption of precision scheduled railroading (PSR), so investors shouldn't focus solely on the numbers. The key will be to listen to Foote's commentary.

Caterpillar is the key industrial bellwether to follow this quarter

Management has already told investors to expect full-year earnings at the low-end of its guidance range of $12.06 to $13.06 per share, and a look at the chart below shows that its three-month trailing retail sales in the construction segment went into contraction in July. Meanwhile, management previously spoke of intense price competition in China. 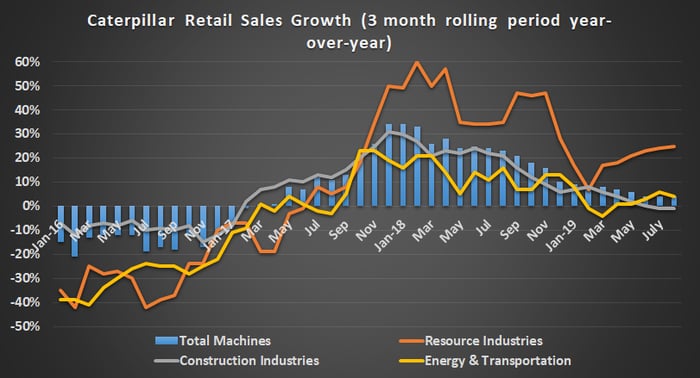 Caterpillar has said it expects a bounce in oil and gas spending in the fourth quarter, powered by operators in the Permian Basin as new pipeline capacity comes online. But other companies with exposure to spending in the Permian, such as Cummins, have been lowering their end-demand forecasts from that region.

Management's commentary on construction, oil and gas and locomotive equipment demand will be important, but the key question is whether Caterpillar will maintain its outlook for capital spending by mining companies?  Mining has been one of the bright spots in the industrial sector in 2019 in terms of its capital investments, and so far, it still looks likely that mining companies will ramp up their expenditures further. But Caterpillar's commentary will provide better insights into what's likely to come next.

Follow Danaher to see if defensives are still defensive

As of this writing, Danaher's stock price is up by nearly a third in 2019. Investors have warmed to the potential in its deal to buy GE's biopharma business,  and its revenues from life sciences and diagnostics make it a safer stock to hold during uncertain economic times. 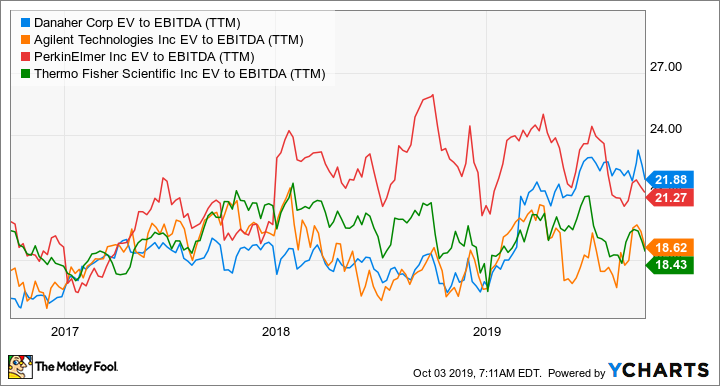 Danaher's current guidance for full-year core revenue growth of 5% looks conservative, given the 5.5% growth it delivered in the first half. The question from here, however, is whether the looming economic slowdown will drag down the life sciences and diagnostics markets. That's a greater concern as stock valuations in the sector (see chart above) are starting to look stretched. Danaher's outlook will help investors understand whether there's still mileage in the investing theme or not.

All told, the upcoming earnings season is likely to be full of noise and create some volatility, but if investors keep clear heads and follow what these companies have to say, they should be able to draw some accurate conclusions about how to handle their portfolios.