Global denim powerhouse Levi Strauss (NYSE:LEVI) is on deck to report third-quarter fiscal 2019 earnings on Tuesday after the markets conclude business. While shares of the consumer staples stalwart are trading roughly 14% above their March 21 initial public offering (IPO) price of $17, the LEVI symbol has traced a descent since the company released a disappointing second-quarter report in July. Let's walk through four themes investors should follow to make sense of the manufacturer's upcoming earnings press release -- and its bearing on stock price.

Since its founding 165 years ago, Levi's has reliably achieved sales growth through the sale of one product: men's bottoms (i.e., men's jeans). Men's bottoms are considered a pillar of the company's "core business" strategy by management. Yet extending beyond the impact of this product group is also a vital priority for Levi Strauss following its return to the public markets this year.

The iconic jeans manufacturer is plowing resources into men's tops, women's jeans and tops, and accessories to nurture faster-growing revenue streams. Impressively, sales in the women's category improved 16% year over year last quarter, and management noted that this completes 16 consecutive quarters of expansion in women's wear -- the last 10 quarters have each notched double-digit growth.

The company's tops business is also thriving. While most associated with denim shirts and jackets, tops also include graphic T-shirts and sweatshirts. Tops sales improved by 14% last quarter against the prior-year period, boosted by sweatshirts and "trucker" denim jackets. In the upcoming earnings call, which will cover Levi's first complete quarter as a public company, expect management to discuss the contribution of both the women's category and tops to overall top-line acceleration.

Levi Strauss has emphasized the build-out of its direct-to-consumer (DTC) channel over the last few years as its wholesale channel has weakened. Levi's global wholesale business is in decent shape and has recently experienced mid-single-digit growth, but sales in the organization's U.S. wholesale channel declined by 2% year over year last quarter.

The company points to store closures, retailer bankruptcies, and its own curtailment of heavily discounted items as factors behind domestic wholesale channel pressure. Management warned investors last quarter that bankruptcies and fewer available retail doors will likely shave 200 basis points off the company's total sales in the back half of the year -- keep an eye on U.S. wholesale numbers in the upcoming release. 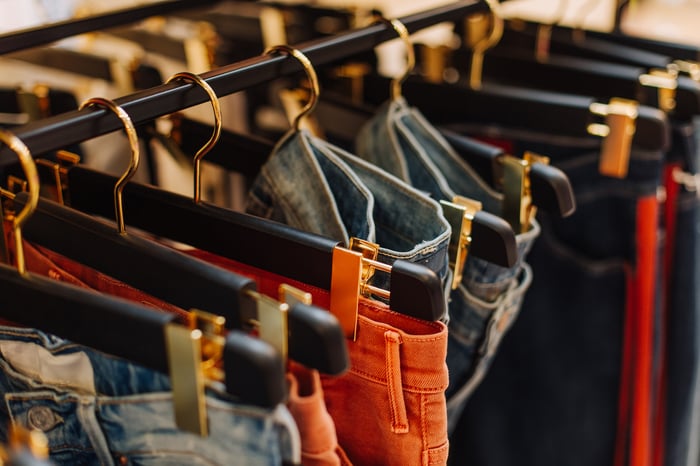 Despite U.S. wholesale market challenges, sales are rising briskly: Last quarter, Levi's raised its constant currency revenue growth projection for fiscal 2019 from mid-single digits to the high end of the mid-single-digit range. This basically translates to growth of 6% to 7% in constant currency (inclusive of the 200-basis-point headwind discussed above). Of this expansion, management noted that "Growth will be broad based, with all regions and channels growing."

Two continents are providing most of the company's revenue momentum. European sales last quarter grew 9% year over year, and Asian sales advanced by 6%. Yet in constant-currency terms, European and Asian sales jumped by 18% and 12%, respectively. Levi's is expanding its retail presence in both geographies, and management sees potential particularly in China and India, where its trademark brands have vast long-term potential, despite current geopolitical worries including the U.S./China trade war.

In Tuesday's report, and indeed in any given quarter, shareholders should check the year-over-year sales growth rates for Europe and Asia to get a sense of the company's progress in acquiring market share in these critical markets.

4. The effect of DTC revenue on profits

Levi Strauss' direct-to-consumer channel is divided into two components: the company's own retail store network and e-commerce sales. While in the long run, investing in DTC sales will improve overall profit margin and decrease the company's reliance on third-party department stores, the near-term effect isn't quite as clear-cut as one might expect.

Generally, rising DTC revenue benefits Levi's gross margin, due to lucrative e-commerce sales and a higher proportion of sales at the company's own retail venues. However, to build this channel, Levi's is constantly investing in physical and technological infrastructure. Expenditures of this sort, which aren't tied directly to equipment and fixed assets, hit the income statement as operating expenses. Additionally, Levi's is gradually allocating more marketing resources to DTC sales, which also inflates operating expense.

Thus DTC revenue can actually improve gross margin during a quarter while weighing on operating margin. Investors witnessed this phenomenon last quarter as management cited growth in the company's direct business as an offset to a 60-basis-point decline in gross margin to 53.3%. Yet investments in DTC distribution and higher direct advertising and promotion expenses were factors (along with IPO expenses) that pushed operating margin down roughly 150 basis points to 4.7%.

Ultimately, investment in higher direct-to-customer sales should lead to an attractive improvement in operating margin. But shareholders should expect the current gross and operating margin dynamics to hold in the near term when the jeans stitcher reports on Tuesday.