Lower net earnings against the prior-year quarter tore at the fabric of denim-maker Levi Strauss's (NYSE:LEVI) recent success following its March 2019 initial public offering (IPO). The manufacturer's second-quarter 2019 earnings, released on Tuesday after the markets closed for trading, appeared to catch investors by surprise due to the wide difference in year-over-year quarterly results.

Shares opened down as much as 12% in the morning session on Wednesday following the release. Below, we'll dig into the details of the last three months, including specific factors behind the drop in net income, and look ahead to the second half of 2019. Note that all comparative numbers are presented against the prior-year quarter.

What happened at Levi Strauss this quarter? 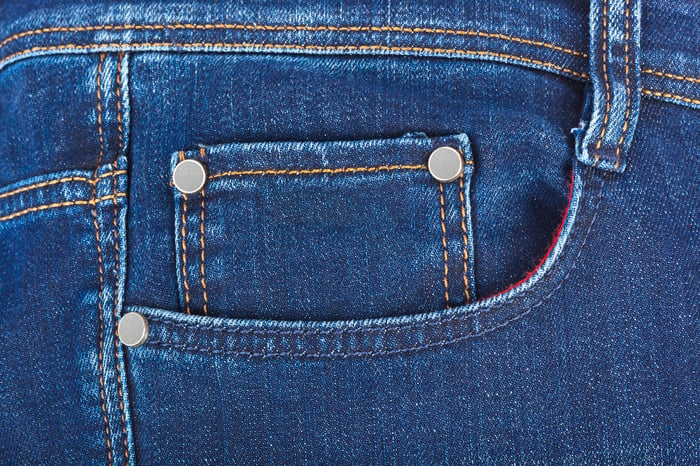 Our second quarter and first half results reflect the continued strength of our diversified business model as we delivered broad-based growth across all brands, regions and key product categories despite a challenging retail and macroeconomic environment. For both periods, the Levi's brand grew in all three regions across men's, women's, tops and bottoms and maintained its position at the center of culture through iconic products and consumer experiences.

Though likely of small solace to shareholders, Levi Strauss firmed up its yearlong outlook on Tuesday, presenting slightly higher financial targets from those issued last quarter. The organization expects year-over-year revenue growth at the high end of the mid-single-digit range in constant-currency terms versus a simpler earlier expectation of mid-single-digit revenue growth.

The company now expects adjusted EBIT (earnings before interest and taxes) margin growth of 10 basis points in constant currency versus last quarter's projection of full-year EBIT margin growth of "flat-to-slightly up." In the first two quarters of 2019, Levi Strauss has notched an EBIT margin of 10.5% against 10.3% in the comparable period, so at least on this measure, the company appears to be on track to meet its revised expectations.