Investors aren't hog wild for Harley-Davidson stock, nor are they eager to drink from the Constellation Brands bottle.

"Can't trust that day," The Mamas and the Papas once sang about Mondays in general.

In addition to the usual aches, pains, and regrets about going back to work following the weekend, owners of some top stocks had good reason to be glum about this Monday. Many key indicators were down, with many stock prices going south at market close. Some declined more than others, though -- here's the skinny on two of these low movers. 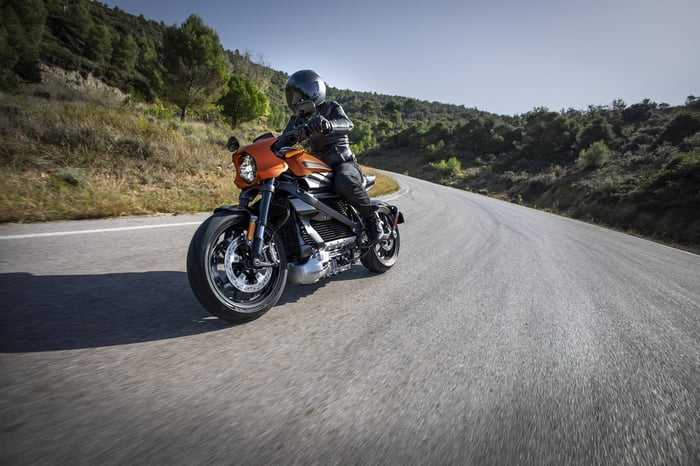 Can classic motorcycle manufacturer Harley-Davidson ( HOG -2.33% ) become the two-wheeled Tesla? If the early reaction of investors is anything to go by, the answer is a solid "no" -- the stock was down 3.4% at market close today.

A report published today by Reuters detailed the company's struggles to capture a new market for its first electric motorcycle, the LiveWire.

Harley-Davidson is strongly associated with a customer base of baby boomer riders, and has had difficulty attracting other demographics. In fiscal 2018, the company posted its steepest year-over-year sales decline in years.

The LiveWire is an attempt to rope in green-conscious millennials -- however, these consumers don't seem to be jumping at the chance to own it. The report from Reuters, based on interviews with 40 dealerships throughout the U.S., indicate that the bike is not popular, and the purchasers tend to be boomers who are existing motorcycle riders.

A delay in shipping hasn't helped -- the bike is only now finding its way onto dealership floors, two months after originally scheduled.

The price tag is also high for younger consumers -- nearly $30,000, an amount that could buy a better-than-average car. Finally, there are concerns about the LiveWire's city/highway combined range, which is apparently below 100 miles per charge.

The LiveWire's woes aren't what Harley-Davidson investors want to hear regarding their company. The company needs to turn around its sales dynamic, and it looks like this isn't happening with the electric bike. Unfortunately, it doesn't seem that the company has much of a plan B at the moment. I'd avoid the stock until it concocts a better strategy.

Not for the first time in recent days, alcoholic drinks maker Constellation Brands ( STZ 0.41% ) took a hit on the stock market. It fell by almost 3% on Monday.

Since there's no news of great significance coming from the company itself, it's possible that the chop was due to a recent development from one of Constellation's big investments: Canopy Growth ( CGC -3.57% ).

Canopy Growth is a marijuana stock that has struggled to reach profitability. As with peer companies, its goal is to build up significant scale. With billions of dollars in its coffers from Constellation's involvement, it's doing this through frequent acquisitions.

The latest, announced last week, is for sports drink manufacturer BioSteel Sports Nutrition. Canopy Growth believes there's growth to be had in that segment, especially if it can add the trendy and supposedly health-beneficial cannabidiol (CBD) to such products.

But the sports drink market isn't all that big, relatively speaking, and BioSteel was probably not all that cheap. The purchase price hasn't been revealed, but the company's team of sports celebrity endorsers -- including hockey Hall of Famer Wayne Gretzky -- surely commands some level of premium.

Canopy Growth has been an albatross for Constellation lately, with a stock price slide negatively affecting the latter company's results. Maybe Constellation investors want to see Canopy Growth buy assets that have bigger potential customer bases and/or are more directly complementary to its core business.

Meanwhile, the drink maker has a more pressing issue it needs to deal with -- a queasy drop in sales of wine and spirits -- so it's probably not a great investment right now, even at a discount.