The past year hasn't been a good one for the semiconductor industry. After a huge surge in demand over 2017 and 2018, the trade war between the U.S. and China led to semiconductor buyers turning very cautious late last year and in early 2019, leaving the industry oversupplied.

Given the bottoming of the chip cycle we are experiencing today, which company makes the better buy at this moment? 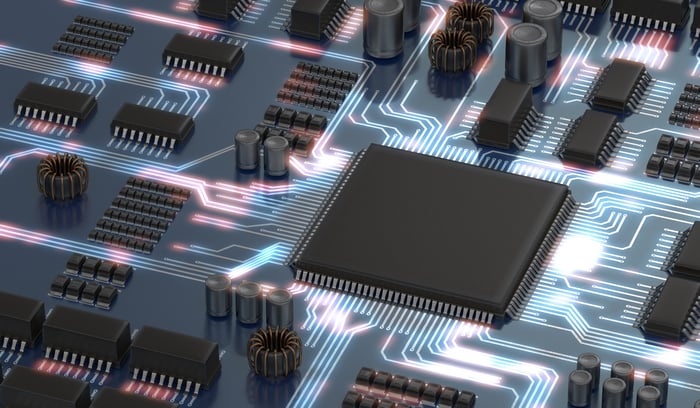 Volatility is high in the storage business, less so in processors

As you can see, both companies have an element of cyclicality in their businesses. However, the cyclicality of Western Digital is much more pronounced than that of Intel: 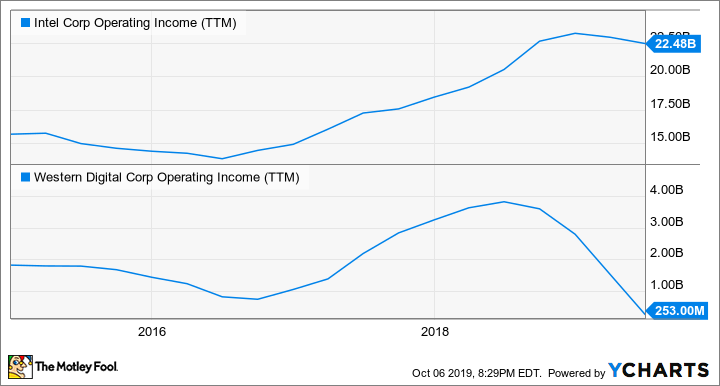 Meanwhile, Intel's income is only slightly declining during this downturn. Last quarter the company's revenue and non-GAAP net income declined only 3%, while non-GAAP earnings-per-share (EPS) actually increased by 2% thanks to Intel's robust share repurchases.

As you can see, the supposed risk profile is reflected in each company's valuation. While Western Digital's earnings are set to remain depressed for its current fiscal year (which ends June 30, 2020), its valuation is far cheaper on the basis of 2021 estimates once we theoretically get through the bottom in storage bit pricing. Meanwhile, Intel is forecast to produce flat, steady earnings over the next two years.

In addition to Western Digital's sunnier forecast over the next few years, the company's dividend yield currently stands at 3.41%, versus Intel's mere 2.55%. Since Western Digital is coming out of a more severe slump, it seems like it's both cheaper than Intel, and has better medium-term growth prospects as well.

Thus, while Western Digital may seem like a higher risk (and also have higher upside opportunity), Intel is not without its own risks. In the past year, rival Advanced Micro Devices (NASDAQ:AMD) has beaten Intel in the race to produce a 7nm chip, the first time in a long time that Intel has not had the advantage in cutting-edge processors. AMD's chips are just hitting the market this year, and we can already see some of the potential competitive hurdles for Intel. Intel just announced the release of its new i9 Cascade Lake desktop processors at a 40%-50% discount versus its prior generation, a massive discounting that seems to acknowledge the competitive onslaught coming from AMD.

That seems to indicate Intel may be losing some of the competitive advantage it has enjoyed in prior years. This is a big deal: While Intel has diversified its business into programmable chips, Internet of Things chips, storage, and self-driving car software, the company's processors across both consumer and data centers still comprised almost 84% of Intel's revenue last quarter.

Meanwhile, while Western Digital's current financials may look ugly, things appear set to turn around. After two years of horrific price declines -- NAND flash prices have dropped a whopping 80% in the past two years -- it appears as though NAND flash prices are leveling off, and some even think flash prices could rise in the fourth quarter and through 2020, marking the beginning of the next up-cycle in memory. New applications such as artificial intelligence, self-driving cars, and cloud computing will all require massive amounts of storage, and demand now seems to be catching up with the industry's supply growth.

Intel would, of course, benefit from the turn in NAND flash prices as well, but its flash business only made up 5.7% of revenue last quarter.

While Western Digital has not had the competitive differentiation that Intel has enjoyed in the past, it does execute about as well as the rest of the storage industry, and it can also pivot between NAND flash and HDDs. Meanwhile, Intel's traditional competitive advantage in processors may be eroding. That's why Intel's choice as a "risk-off" choice might not be so cut-and-dried.

I'd actually pick Western Digital over Intel today, both because of the prospects of a memory cycle recovery and AMD's pursuit of Intel's business. You should do the same, but only if you are comfortable owning a cyclical stock.