The fast-fashion icon's fall may be a symptom of a bigger problem in the industry.

The bankruptcy of fast-fashion icon Forever 21 should worry Gap (GPS 0.56%) investors and those looking forward to the spin-off of the Old Navy brand.

It's not just that this bankruptcy is yet another failure in the retail space -- one that has seen well over a dozen retailers go under just this year alone -- but rather it's because of what it could mean for Old Navy's business itself. Going public in a weak retail environment is hard enough, but Forever 21's collapse suggests that fast fashion itself may be in trouble. 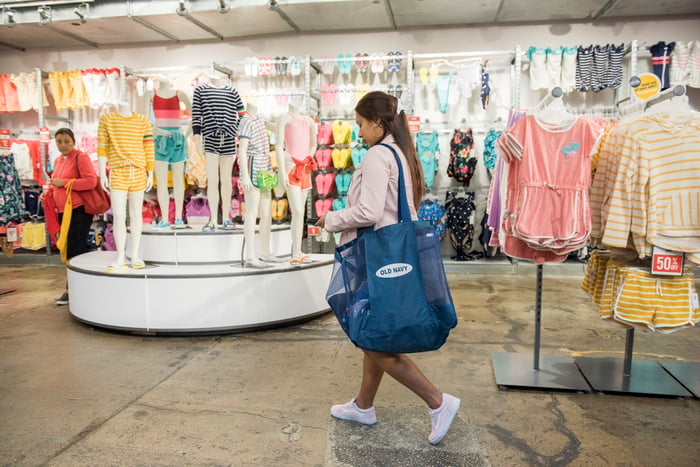 Old Navy has been a stellar brand at Gap, accounting for 47% of total sales and most of its operating margin. Old Navy's adjusted earnings before interest and taxes was 15% in 2018, while Gap absent the business had adjusted operating EBIT of just 2%.

Gap is looking for Old Navy to maintain its growth trajectory by opening 75 new stores a year, going from 1,140 today to around 2,000 stores in the future.

In a robust retail market, that would be smart, but that's not the environment Old Navy will be spun off into. The retail industry is slowing, and Coresight Research says there have been nearly 8,600 store closures so far this year, 47% more than in all of 2018, and it expects as many as 12,000 stores to close by the time 2019 ends. Although the Payless Shoes bankruptcy accounts for around 20% of all the closures, the 180 stores Forever 21 will shutter in the U.S. have far more meaning for Old Navy.

A better way of doing retail

Along with H&M (HNNMY -2.71%) and Zara, Forever 21 was one of the iconic fast-fashion brands that changed retail. Instead of the usual months-long effort to design, manufacture, and distribute clothes, fast fashion ripped trends from the runways and had them on store shelves in a matter of weeks. It was this idea of disposable fashion that turned Old Navy into the growth engine it became.

So successful was its transformation, generating $1 billion worth of market share just three years after its conversion, that CEO Art Peck sought to similarly transform Gap and Banana Republic into fast-fashion brands too. Unfortunately, that failed to achieve the same results, and in the case of Banana Republic, Peck abandoned the project.

While other retailers have had some success in mimicking the fashion-forward sense (Abercrombie & Fitch's effort at Hollister is a notable example), it isn't an easy transition because it's really a different way of doing business. There is more to it than simply turning over styles and inventory more quickly; it also requires a new way of sourcing materials and changing inventory management systems. In short, it's a whole new way to think about running a company.

But there are limits

And fast fashion may have run its course, of which Forever 21's bankruptcy is just one symptom. H&M's business has been beset with slowing sales, a decline it was only able to reverse in the third quarter by significantly scaling back plans to open more physical locations. In 2018, it opened 193 net new stores, while this year it expects 120 net new stores to open "as part of the intensified store optimisation." Sales rose 12% this quarter, and profits widened 25% as a result.

Fast fashion is also being challenged by changing consumer preferences, such as concern for the impact disposable clothing has on the environment and on workers in the industry. Millennial and Gen Z consumers are eschewing cheap fabrics in favor of sustainable, ethically sourced materials. Slow fashion may be making a comeback.

That's not to say Old Navy's business will collapse and wither away overnight, but it has been beset by slowing sales of its own. Peck has placed blame simply on some fashion miscues, but it may be a deeper problem than that, and Forever 21's bankruptcy could be the first signs of trouble.