Please ensure Javascript is enabled for purposes of website accessibility
Log In Help Join The Motley Fool
Free Article Join Over 1 Million Premium Members And Get More In-Depth Stock Guidance and Research
By Keith Speights - Oct 9, 2019 at 6:00AM

The losses are mounting in a major way, two years after the alcoholic-beverage maker's initial investment in Canopy.

Constellation Brands (STZ 0.79%) is only a few weeks away from an important anniversary: Nearly two years ago, the big alcoholic-beverage maker bought a 9.9% stake in Canadian cannabis producer Canopy Growth (CGC -12.07%). Constellation is also approaching the one-year anniversary of its additional $4 billion investment in Canopy. 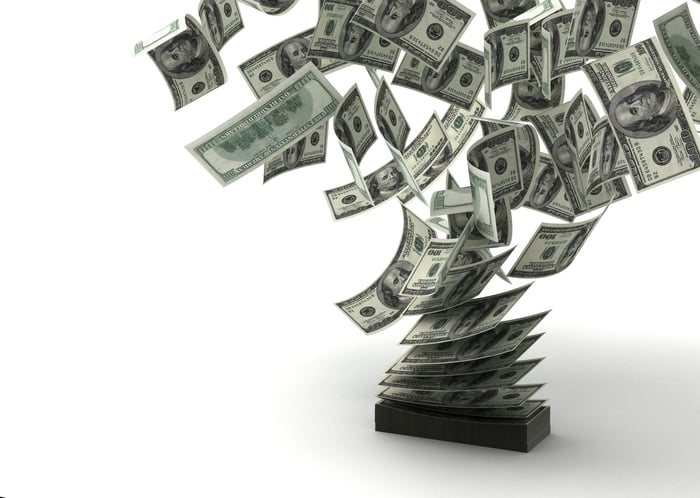 While Constellation's stake in Canopy Growth was small, the beverage company didn't feel much pain financially. In its annual report for the fiscal year ending Feb. 28, 2019, Constellation posted a net loss of only $2.6 million related to its investment in Canopy.

But as that stake grew, it linked Constellation's fortunes much more closely with Canopy's. And this happened during a time when Canopy Growth ratcheted up its spending significantly. In the quarter prior to Constellation's initial investment in the cannabis producer, Canopy reported operating expenses of 29.9 million Canadian dollars, with a net loss of CA$1.6 million. In its latest quarter, Canopy spent nearly CA$666 million and posted a net loss of CA$670 million.

Those losses will almost certainly continue to mount -- Canopy Growth isn't anywhere close to achieving profitability yet. It probably won't even report positive EBITDA (earnings before interest, taxes, depreciation, and amortization) until its 2022 fiscal year, which ends March 31, 2022. It will take even longer until Canopy delivers positive earnings, perhaps up to five years from now.

There is some good news, though: Canopy Growth's share price is up more than 75% since Constellation closed its first investment in the cannabis producer in November 2017. This nice gain has given the alcoholic-beverage maker a strong return on its initial stake in Canopy.

However, Canopy stock is down nearly 40% since the close of Constellation's second -- and much larger -- investment. Still, as of Aug. 31, Constellation had recognized a $757 million unrealized net gain from its position in Canopy Growth.

But if Canopy's share price falls even more than it already has, that unrealized net gain could be only fleeting. And the operative word here is "unrealized." Constellation won't benefit from any appreciation in Canopy Growth stock until it sells its shares.

Did Constellation Brands make a mistake with its big bet in Canopy Growth? The best answer is that it's too early to know.

Constellation's original premise for buying a stake in Canopy was that the long-term prospects for the global cannabis industry looked good and Canopy Growth was well-positioned for success in the market. There's no reason at this point to believe that those assumptions are wrong.

Remember that the global cannabis market is still only in its early innings; Canada's adult-use recreational market opened not quite one year ago, and sales in its Cannabis 2.0 derivatives market won't begin until December. Medical cannabis markets in Europe, Australia, and Latin America are in their infancy as well. Marijuana remains illegal at the federal level in the U.S., although support is steadily building to change that.

And despite Canopy's continued losses, the company remains a leader in the Canadian and European cannabis markets. Canopy Growth is also arguably in the strongest position of any Canadian cannabis producer to win in the U.S. market, the biggest prize of all. Constellation's big bet could still pay off in a huge way down the road.

The moral of the story is that successful investing in marijuana stocks requires a long-term perspective. Investors must be prepared to accept volatility and erratic financial performance along the way. First and second anniversaries of buying shares of a marijuana stock aren't the ones to focus on. Instead, think at least five years out. Those future anniversaries could be the ones worth celebrating.