The major stock indices had booked solid gains by Wednesday afternoon. Some optimism about a limited trade deal between the U.S. and China appears to be giving investors hope that trade tensions could ease sooner rather than later.

This optimism wasn't enough to save shares of iRobot (NASDAQ:IRBT), which were hit hard by an analyst downgrade. Shares of Roku (NASDAQ:ROKU), on the other hand, were buoyant after an analyst predicted massive growth over the next few years.

iRobot could have a tough holiday season

Investors in iRobot, the company behind the Roomba and other robotic household helpers, have had a tough year. In less than 6 months, the formerly high-flying stock has crashed by more than 50% thanks to weakening revenue growth, lackluster guidance, and a negative impact from tariffs.

More bad news came on Wednesday morning, when analysts at Raymond James downgraded iRobot stock due to competitive concerns. Raymond James cut its rating on the stock to underperform, citing strong competition and pricing pressure from Shark. Market share erosion could be a problem this holiday season if consumers opt for lower-priced alternatives to iRobot's pricey products. 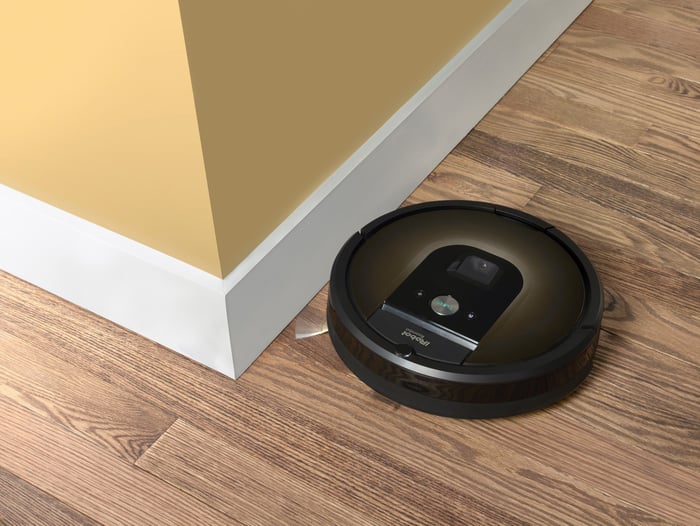 Raymond James doesn't expect the situation to improve next year, predicting revenue of $1.27 billion and earnings per share of $2.40. The consensus analyst estimate for 2020 revenue is $1.36 billion, according to Yahoo! Finance, and the consensus earnings estimate is $3.09 per share.

This analyst pessimism weighed on the stock. Shares of iRobot were down 5.9% by 1:15 p.m. EDT Wednesday.

iRobot expects to produce revenue between $1.20 billion and $1.25 billion this year, along with EPS between $2.40 and $3.15. Assuming iRobot hits its guidance, Raymond James' forecast for 2020 calls for very weak revenue growth and flat earnings at best. That's a far cry from the rapid growth the company has experienced in recent years, and if it comes to pass, the stock could fall much further.

Roku's user base has room to grow

While iRobot's prospects appear to be dimming, Roku is a different story. Analysts at Macquarie upgraded the stock to outperform on Wednesday, predicting a substantial user base increase by 2022, along with near tripling of revenue. The stock was up 8.1% by 1:15 p.m. EDT.

Macquarie believes that Roku's smart TV integrations, as well as a vast opportunity in international markets, can drive the company's user base to more than 70 million by 2022, up from 30.5 million active accounts at the end of the second quarter. Platform revenue could soar to $2.3 billion in that time, driven by the monetization of the user base.

Along with the upgrade, Macquarie raised its price target on Roku stock from $110 to $130. At $130 per share, the company would be valued at nearly $15 billion. That's a price-to-sales ratio, based on Macquarie's revenue estimate for 2022, of about 5.5.

Roku isn't currently profitable, with a net loss of $19.6 million through the first six months of 2019. However, a rapidly growing advertising business could certainly change that in the coming years. There are competitive pressures, like Comcast's recent move to offer free streaming boxes to Internet subscribers. But massive user base growth for Roku over the next few years is certainly possible, given the popularity of its platform.