Please ensure Javascript is enabled for purposes of website accessibility
Log In Help Join The Motley Fool
Free Article Join Over 1 Million Premium Members And Get More In-Depth Stock Guidance and Research
By Asit Sharma - Updated Oct 10, 2019 at 9:27AM

Shares in this stable, outperforming services company could grow quite attractive if the U.S. economy downshifts a few gears.

Is the probability of a recession increasing as we begin to look ahead to 2020? In a report released this week, the National Association for Business Economics, or NABE, predicts that U.S. gross domestic product will decline from projected growth of 2.3% in 2019 to just 1.8% in 2020. NABE's "Outlook" survey, which combines 54 different forecasts, cites the United States' trade policies as the most serious risk to domestic economic growth in the coming quarters. NABE's economists put the odds of a recession in 2020 at 24%, and they estimate a 69% probability of a recession in 2021.

Recessions are rarely kind to stock markets, but they do create potentially attractive long-term investments for the well-prepared. Opportunistic income investors should consider putting employer services giant Automatic Data Processing (ADP 1.32%) on their watch lists as a lucrative purchase candidate should the economy indeed head south and drag markets along with it. 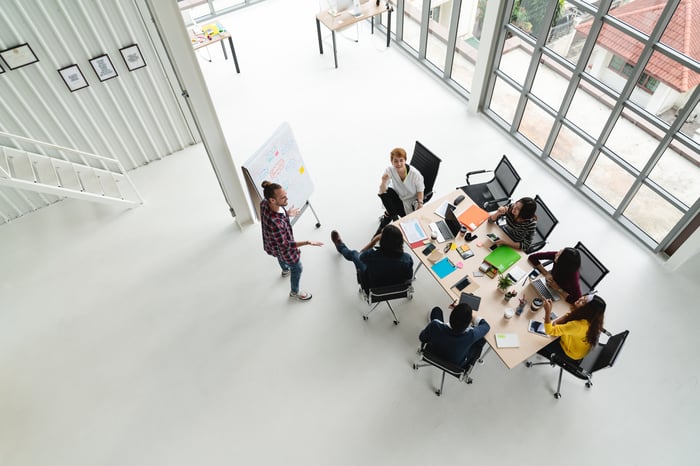 A surprising combination of dividend growth and outsize capital appreciation

Automatic Data, which also refers to itself as ADP, is one of the world's largest human capital management (HCM) and human resources outsourcing (HRO) providers. The company's business is spread across 140 countries and 810,000 clients. Automatic Data's largest operational segment is employer services, which includes payroll and benefits administration, HCM services, and certain cloud-based HRO services.

ADP's second major revenue stream, its professional employer organization (PEO) business, operates under the name ADP TotalSource. The PEO model is popular with enterprise clients and is increasingly being adopted by small and midsize businesses. In a typical arrangement, a PEO becomes a co-employer with its client, and directly administers employee-facing services, including payroll, benefits, HR, health insurance, and even retirement plans.

These recurring revenue streams provide stability for a company that's quite embedded in the broader economy: Automatic Data administers payroll for 1 out of every 6 workers in the United States. ADP has a long track record of passing on its stable income to investors, having increased its dividend payout for 44 consecutive years. The current quarterly dividend of $0.79 equates to an annualized yield of just under 2%, and its trailing-12-month payout ratio sits at a very reasonable 56%. On a timely note, the company typically announces the coming year's dividend hike in November. 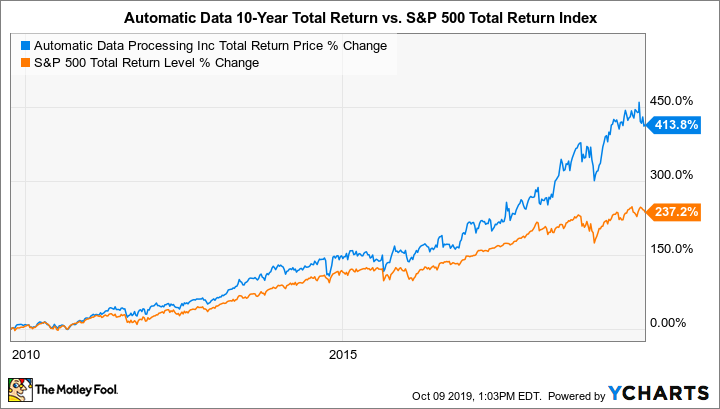 Why ADP's attractiveness will increase during a market downturn

Conventional wisdom may suggest that ADP's stock will be vulnerable in a recessionary period. After all, the company's core line of business is processing payrolls, and as corporations trim their workforces during tough environments, this can translate into less revenue from payroll, payroll tax, and benefits administration services.

It's true that Automatic Data and other payroll providers are likely to experience revenue headwinds if a macroeconomic slowdown materializes. But ADP might also benefit if we see a more severe economic contraction, as employers seek to reduce overhead by turning to the PEO model to save on administration and compliance costs.

There's some recent history to back up this potential outcome. During the Great Recession, Automatic Data managed to grow annual revenue each year between 2007 and 2011. In fact, during its fiscal 2008 year -- the height of the U.S. financial crisis -- ADP expanded year-over-year revenue by 13%. Employer services revenue increased by 9%, and the PEO business jumped 20% in fiscal 2008 as employers took advantage of outsourcing opportunities in both divisions.

Another attractive characteristic of Automatic Data is its relatively rich market pricing. By this I mean that it may be possible to pick up shares at a discount if the U.S. economy enters a period of negative economic growth and investors engage in significant profit-taking. Currently, ADP shares trade at 25 times forward earnings, a 57% premium to the S&P 500 aggregate forward P/E ratio of 16.3. Thus, in a market correction, Automatic Data will almost certainly see initial selling pressure as its trading multiples are readjusted closer to market averages. This will enable interested buyers to pick up shares on the cheap. Note that those who purchase ADP at a reduced share price will also enjoy a higher annual dividend yield versus a purchase today.

In the last recession, Automatic Data, despite an initial sell-off, proved a popular defensive consumer goods stock. While the S&P 500 index lost nearly 50% of its value between the fall of 2007 and the spring of 2009, ADP shares bottomed at 30% from their peak -- outperforming the broader market in a crucial period. And as I mentioned above, in the years following the last U.S. economic contraction, the company has dusted the market, appreciating more in the manner of a tech stock than a staid services company.

In sum, with four decades of consecutive annual dividend increases under its belt, a track record of share price resilience and appreciation, and the opportunity for dividend investors to lock in a higher yield, ADP could present a smart purchase opportunity if a recession hits and shaves off some of its well-earned premium against the overall market.

These 3 Dividend Aristocrats Will Shield You From Another Market Crash

3 Stocks That Could Make or Break Bill Ackman's Portfolio