Many investors in the cannabis industry have faced significant losses in the past year as the industry highs of fall 2018 seem a long time ago now. While industry followers were optimistic about the legalization of recreational marijuana in Canada last year, driving many cannabis stocks higher, the ensuing results have been far more mixed.

One such stock that has been caught in this boom-bust cycle is Tilray (NASDAQ:TLRY). Tilray made its debut on the Nasdaq last July and quickly surged from its IPO price of $17 per share to a record high of nearly $180 just three months later. Shares of its major peers such as Aurora Cannabis and Canopy Growth more than doubled between August and October 2018 as well. 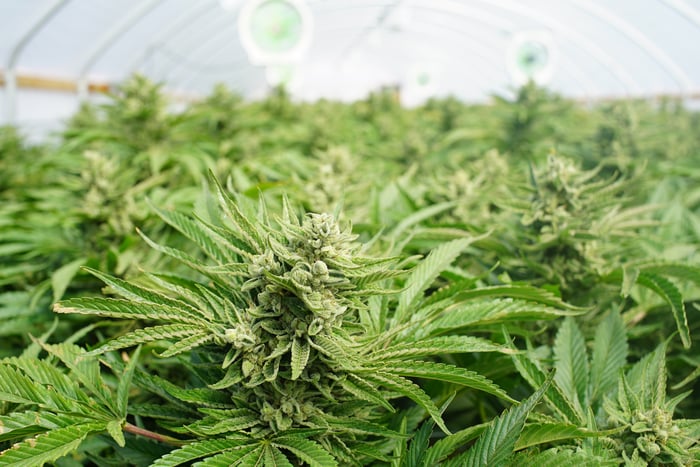 However, those stellar gains also came with sky-high valuations that the market has quickly shied away from -- Tilray is down over 80% from its 52-week high. Let's see if this sell-off makes Tilray an attractive option for investors looking for a bargain means to invest in the still nascent marijuana opportunity.

What drove the past year's sell-off?

Tilray is primarily focused on the medical marijuana space, supplying cannabis products to pharmaceutical distributors and providing medical marijuana research as well as cultivation and distribution services. Beyond the broad sell-off in marijuana stocks, Tilray has missed analysts' earnings estimates, sometimes by huge margins, in each of the last four quarters.

In the most recent report (Q2 2019), Tilray outperformed with revenue of $45.9 million, representing incredible year-over-year growth of 370%. However, the company's bottom line losses similarly surged, more than doubling to $0.32 per share. With that backdrop, investors are rightfully worried about the company's declining profit margins. In the June quarter, gross margin fell to 26.7% from 42.9% in the prior-year quarter, primarily driven by the acquisition of Manitoba Harvest.

In March 2019, Tilray acquired Manitoba Harvest, gaining access to 16,000 retail stores in North America. However, this acquisition also increases sales of low-margin, hemp-based products. Management has also attributed the decline in profitability to procurement of third-party supply and absorption of tax for medical patients. However, Tilray expects gross margin to recover and reach 50% over the next few quarters as the company continues to ramp up production, coupled with lower costs associated with greenhouse and outdoor cultivation.

But then there's the problem of oversupply in the industry. According to a Cannabis Benchmarks report, the inventory levels in Canada at the end of June 2019 stood at 329,899 kg with total supply for June coming in at 62,671 kg. Demand that same month stood at only 11,178 kg.

The report states that as inventory levels rise, cannabis producers will drop their prices to push out product, resulting in a further decline in profit margins. Though lower prices should help increase demand, the supply and demand gap remains huge.

Tilray's management highlighted industry oversupply as a major issue back in March. During the company's fourth quarter 2018 earnings call, CEO Brendan Kennedy stated, "Over the next 18 months, we believe there will be oversupply, just as we have seen in certain U.S. states as operators in new legal markets race and government regulators catch up to find an equilibrium between supply and demand."

The key question for investors now is whether Tilray stock is a good buy at these seemingly bargain price levels. Aware that it competes with larger peers Aurora and Canopy in Canada, management confirmed earlier this year that it would focus on increasing investments in the United States and Europe.

Europe is the biggest market for medical marijuana products. Tilray is also likely to benefit from its partnership with Anheuser-Busch InBev, which will help the company gain traction in the fast-growing cannabis-infused beverages market.

Across the industry, cannabis companies are banking on the rapidly expanding total addressable market for medical and recreational marijuana. The legal marijuana industry might reach close to $200 billion in the next decade. The ever-increasing market and friendly public policy will be key revenue drivers for Tilray and its peers.

Despite those tailwinds, there's still much uncertainty and ongoing disruption in the space, similar to the tech boom and bust of the dot-com era. Profitability remains a long ways off for most of these companies, and volatility for the stocks will be high. The industry is also likely to further consolidate via acquisitions and partnerships over the next decade.

It'll be difficult for investors to accurately predict a winner among cannabis stocks. Investors attracted to Tilray's impressive growth and the "value" at current trading levels are advised to invest only as much as they can afford to lose given these uncertainties.