Please ensure Javascript is enabled for purposes of website accessibility
Log In Help Join The Motley Fool
Free Article Join Over 1 Million Premium Members And Get More In-Depth Stock Guidance and Research
By Leo Sun - Oct 11, 2019 at 8:02AM

Piper Jaffray’s latest survey indicates that teen shoppers are warming up to the California-inspired brand again.

Abercrombie & Fitch's (ANF 1.97%) stock tumbled more than 40% over the past six months due to concerns about the company's slowing growth and contracting margins. Its core growth engine, the California-inspired brand Hollister, also lost its momentum.

However, Piper Jaffray's latest "Taking Stock with Teens" survey, which polled 9,500 teens about their favorite brands, revealed flickers of hope for Hollister. 4% of respondents ranked Hollister as their favorite clothing brand, placing it in fourth place behind Nike, American Eagle Outfitters (AEO 3.13%), and Adidas, in that order.

A 4% share might seem insignificant, but it marks an improvement from the company's 3% mindshare in Piper's spring survey. Hollister didn't even crack the top five in Piper's survey last fall. That slow and steady growth indicates that Abercrombie's attempts to reboot Hollister for a new teen market are paying off.

What happened to Hollister?

Abercrombie & Fitch launched the Hollister brand in 2000, along with a fictional story about the company being founded in 1922 by a global traveler named "John Hollister".

A&F and Hollister were both popular teen brands in the early 2000s, but they gradually lost shoppers to fast fashion rivals and e-tailers. Younger shoppers also started rejecting A&F and Hollister's big logo designs, and ridiculed its oversexed ad campaigns and cologne-filled stores.

A&F's eccentric CEO Mike Jeffries, who led the company from 1992 to 2014, exacerbated the problem with a now-infamous Salon interview in which he declared that the company's "exclusionary" clothes were only designed for "attractive all-American" kids. Teens rejected A&F and Hollister's ads and clothes, along with Jeffries' attitude, and the retailer posted eleven straight quarters of negative comps growth before Jeffries finally stepped down.

How a new CEO saved Hollister (and A&F) 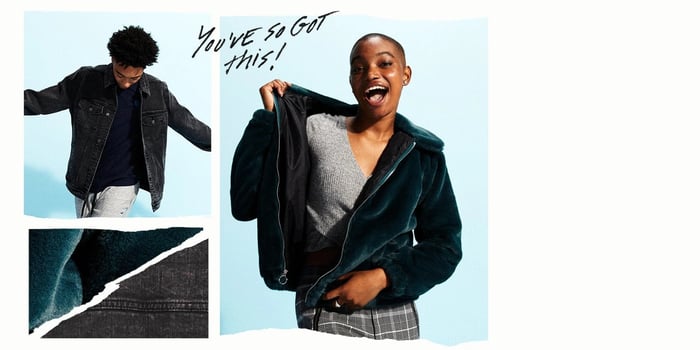 At the same time, A&F increased Hollister's store count and rebooted the brand with fresh marketing campaigns across the music, video, and gaming markets with the help of top social media influencers. That strategic shift turned Hollister into A&F's core growth engine, and the secondary brand overtook Abercrombie in terms of total stores and revenue.

As a result, Hollister's growth offset A&F's weaker growth and enabled the retailer to post ten straight quarters of positive comps growth through the first quarter of 2019. Unfortunately, that recovery hit a brick wall in the second quarter:

To make matters worse, A&F's gross and operating margins also declined annually in the second quarter as it relied more heavily on markdowns. It also faces the looming threat of new tariffs and a strong dollar, and the company doesn't expect those headwinds to wane anytime soon.

Will this flicker of hope spark a full-blown recovery?

Piper's survey indicates that Horowitz's efforts are attracting new teen shoppers. But it might not be enough to move the needle, since American Eagle Outfitters -- which consistently remains ahead of Hollister in Piper's semi-annual surveys -- also struggled with negative comps growth at its namesake brand last quarter.

Piper's survey group is nearly evenly split between male and female shoppers, so it's difficult to tell if Hollister is winning over female shoppers again. Therefore Hollister's gradual recovery among teen shoppers is encouraging -- but investors shouldn't consider it an all-clear signal to start buying the beaten-down stock.