Stock investors worried about a possible recession but still interested in staying in the market don't necessarily have to load up on utility stocks or other traditional defensive alternatives that hold up well in tough economic times. They could consider buying shares of Apple (NASDAQ:AAPL).

While a tech stock may not be your typical choice as a "safe" investment to ride out a recession, Apple is an exception and a better buy than many of its growth stock peers. Here are a few reasons why.

One of the reasons Apple isn't as big of a risk as its peers in a downturn is that it isn't overpriced. While the stock may drop during a recessionary downturn like any other stock susceptible to macroeconomics, it's not likely to suffer significant long-term losses because it's currently a good value buy. Its valuation suggests it is fairly priced and will more likely recover sooner once economic conditions improve. Even at the $1 trillion valuation it currently hovers around, Apple is still only valued at a price-to-earnings (P/E) ratio of 19. That's nowhere near the 70-plus P/E ratio that Amazon trades at or the multiple of 30 that Facebook is currently trading around.

While Apple's price could suffer losses during a recession, for a growth stock, its fairly modest valuation relative to growth stocks and to the overall market is a key reason it isn't likely to see a big correction during an economic downturn, even as many of its overvalued tech peers suffer long-term difficulties. 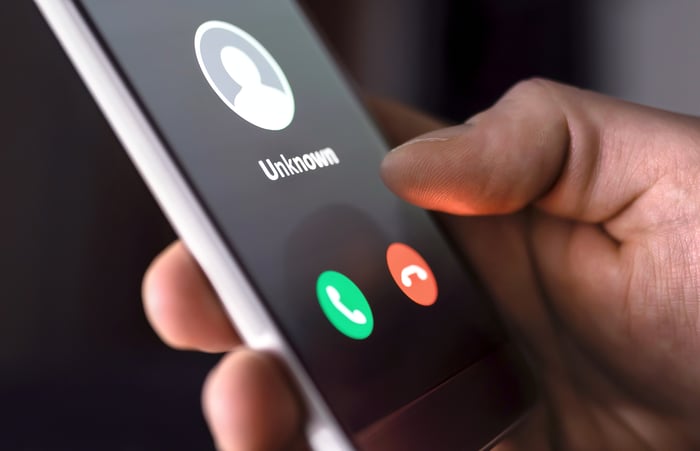 2. The company has strong fundamentals

Apple's financials are very strong, and with free cash flow totaling more than $58 billion over the past four quarters, the company is in a good position to handle adversity. Apple also has $94 billion in cash on its books. Key to the company's impressive results is its strong 21% profit margin, which ensures that a significant portion of any incremental revenue flows through to the bottom line. And with more than $66 billion in cash on its books, the company has the resources to help prop up its share price by buying back more shares, if needed.

Another benefit of all that cash flow is the company should have no problem paying its dividend, and could even have room to increase it as its payout ratio is a very manageable 25%. While it may only provide a modest yield of around 1.4%, the dividend income could prove to be very valuable for investors, especially if the stock isn't performing well.

Even with gross profit margins being a modest 38% over the trailing 12 months, that's still enough to cover operating expenses, which are currently just 13% of sales. This gives Apple lots of room to continue to post strong profits, even in light of concerns around trade with other countries and other issues that could have an adverse impact on its costs.

It's also why lower-priced iPhones may be a great way to draw in more customers while the company can still generate strong profits. Apple's low operating costs give the company a lot of flexibility in its strategy, and that's crucial if the economy slows down and consumer discretionary income begins to fall.

3. Cult-like following makes the company more stable than most

What's made Apple resilient over the years is the strong brand loyalty it garners. Despite premium pricing on many of its products, Apple stores remain busy and there's no shortage of people who are willing to pay for the latest model. The recently released iPhone 11 is off to a strong start, even though it doesn't look all that different from the previous year's model.

The latest phone release does have some additional camera features and other functional upgrades. Whether that's worth the premium pricing or a yearly upgrade is debatable. Apple is really benefiting from a large base of loyal users who have grown accustomed to and are intricately tied to their iPhones and iPads. Unwillingness to pay the high switching costs to non-iOS phones gives Apple a big advantage in being able to retain its users and its revenue streams. Whether it's apps that aren't available elsewhere or just better integration with Apple TV and other services, there are many reasons why a transition to another system wouldn't be seamless.

Apple has such a strong following that consumers are still willing to pay top dollar for a phone that may not be all that much better than the last one they bought. That's why it may be no surprise that Apple hasn't had to invest a whole lot more into its selling, general, and administrative costs, which have risen a modest 18% in two years.

Apple loyalists haven't needed a lot of convincing to continue buying the company's products. Even during a recession, there will likely be many customers who are more than willing to stretch their budgetary limits to continue buying the latest-and-greatest iPhone. And given how integrated cellphones have become in people's day-to-day lives, the devices are much more of a necessity, making Apple's products harder to trim from the budget.

Apple's proven to be a great stock buy over the years, rising more than 700% over the past decade, and showing steady growth. With strong financials and a solid user base, the company is in great shape to be able to do well, even in the midst of more challenging economic conditions. For these reasons, along with the stock being well-priced, Apple could be a great option for risk-averse investors looking for a safe buy.