The path to a new strategy

In July 2017, Founder and CEO Kevin Plank hired outsider Patrik Frisk as President and Chief Operating Officer to drive Under Armour's transformational effort. Frisk hit the ground running, orchestrating a massive survey of over 20,000 customers globally and was involved with updates to the company's Mission, Vision, and Values. Next, he set to align the product development process with its newly defined customer: "the focused performer." 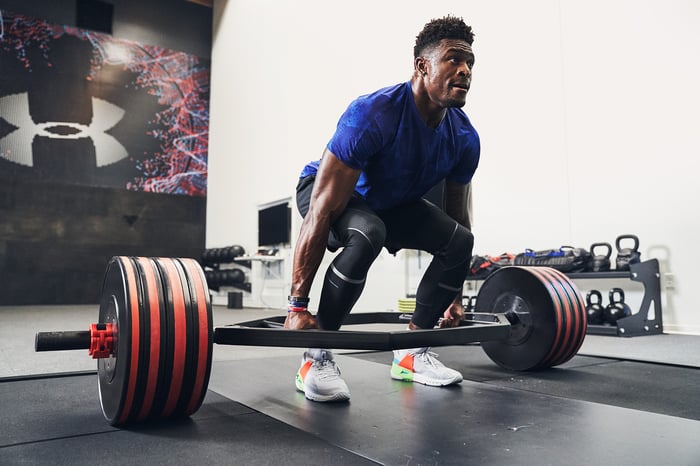 Under Armour's management team has a heavy lift with this huge transformation. Image Source: Under Armour

In May 2018, Frisk provided a preview of this massive transformation plan at the annual shareholders meeting. The effort had three key themes:

Frisk shared that the new product development cycle (from initial idea to retail shelf) was 22 months long. Given the lengthy process, the first season of new products that would go completely through the reengineered process was its Spring 2020 season.

In December 2018, management officially provided the details of its transformation plan and five-year strategy at its investor conference. Plank and Frisk consider this its starting point for measuring progress. In the most recent earnings call, they described it was only "two quarters into the five-year plan." Even though it's still early, there are signs that the plan is working.

Gross margins are improving due to two key transformational changes: a significant reduction in SKUs (stock-keeping units) and a reliable product release calendar. Because there are fewer SKUs, each SKU has higher volumes allowing the company to obtain better prices on raw materials. With a reliable calendar, the supply chain teams can save money on freight costs by not having to ship materials at the last minute. Chief Financial Officer David Bergman stated that 110 of the 170 basis point improvement in gross margins to 46.5% over Q2 2018 was from these savings from the supply chain. Additionally, the supply chain team is credited with driving inventory reductions of $333 million to $966 million versus Q2 2018.

Cost structure improvements are always welcomed, but investors want more robust revenue growth too, and there's one region that needs to deliver.

Overall top-line growth won't improve until the struggling North American region, with approximately 70% of the company's sales, stabilizes. Competitors Nike and Adidas are surging in the U.S., and e-commerce is pulling some consumers away from Under Armour retail stores. This has been especially problematic being in the midst of a product development transformation. As a result, it has seen four straight quarters of revenue declines.

YoY=Year over year. Data from Under Armour earnings releases. % of total calculation by author.

Frisk is hoping a promising pipeline of new products and a fresh leader with an outside perspective will be the keys to a turnaround. Stephanie Pugliese, formerly CEO of Duluth Holdings, started as the new President of the region on Sept. 16.

With Frisk's plan for the North American region in place, investors are wondering when will this transformation start seeing improved top-line results.

Even though new product innovations are coming, it will take time for consumers to respond. The current full-year revenue growth outlook for 2019 of 3% to 4% accounts for this. With the first half of the year in the books at a paltry 0.9% growth and Q3 projected to be down 2% to 3%, Bergman says Q4 results are going to be a "low to mid-teen [revenue growth] rate" in order to hit the full-year outlook. But investors shouldn't get their hopes up that the Q4 growth rate can be sustained into next year.

The strategic plan presented at investor day projected 2020 through 2022 annual revenue growth at a "mid to high single-digit % CAGR" (compound annual growth rate), meaning anywhere between 5% and 9%. It's not until 2023 when management is expecting the full year to reach the coveted double-digit annual revenue growth.

Adding up the effects of a long product development cycle and the time it takes to win back consumers, it's likely going to be another year until this performance clothing company's top line shows consistent improvement. But even then it's only still in single-digits.

Given that there's still lots of work ahead with this transformation, you would think the stock would be reasonably priced compared to its peers, but it's not. Under Armour has a lofty 107 price-to-earnings ratio which is about triple what Adidas' and Nike's are. Given the challenges still ahead for the company and its high valuation, investors would do well avoid this stock for now.