Shares of Levi Strauss (NYSE:LEVI) got the blues after the denim maker reported third-quarter earnings last week. Although it beat analyst expectations, it still showed lower profits and a deteriorating U.S. wholesale business.

Direct-to-consumer sales remain a bright spot, however, as currency-adjusted revenue rose 12% year over year. And in a strategy designed to go with that momentum, Levi Strauss remains committed to opening 100 new stores this year. Yet it's operating in a retail environment that is seeing thousands of stores close, meaning it may be risky for the jeans company to bet it can swim against the tide. 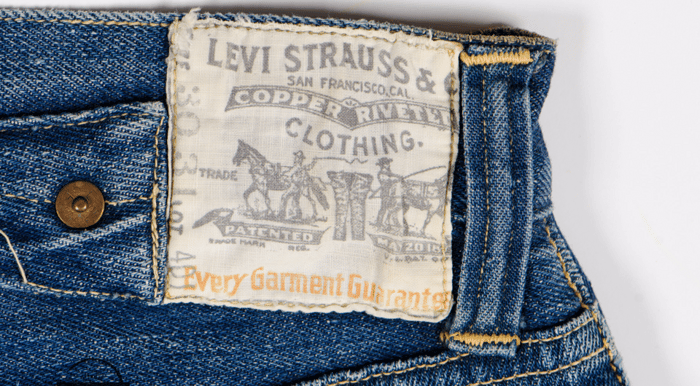 One thing Levis Strauss has going for it is an iconic name synonymous with denim jeans. Its jeans still carry a premium in the marketplace, and arguably it's only because of the shifting preferences on how consumers shop today that its business is weaker than it might otherwise appear.

The mall is dying as a meeting center for shoppers. Customer traffic is down as anchor stores are no longer a draw, and the department stores themselves are many times financially strapped. Sears went bankrupt, J.C. Penney seems to be teetering on the edge, and Macy's looks unwell, too. Analysts estimate as many as 12,000 stores will close this year, so selling jeans or any other apparel in these channels becomes more difficult. Levi Strauss has characterized it as a "melting iceberg."

Yet not all retail is equal. The company says upscale retailers are actually doing better than their mid-tier or discount rivals, and its wholesale business in the premium channel actually rose 8% in the quarter and is up 16% year to date.

CEO Chip Bergh also highlighted for analysts the test it is running with Target (NYSE:TGT) to sell its signature Red Tab jeans at that retailer. While Target might seem to run counter to Levi's professed disdain for the mass market, its clothing has actually appeared in its stores for years under its lower priced Denizen brand.

Earlier this year, however, Red Tabs began showing up on Target's website and in 20 stores near college campuses and urban centers, and the pilot was eventually expanded to 50 stores. Originally, it was just men's jeans, but now jackets and tops and women's denim can also be found in the 20 stores.

It knows its customers best

Yet Bergh also told analysts the wholesale channel is not where it's focusing its efforts: "Growing our U.S. direct-to-consumer business allows us to move toward premiumizing the marketplace, and remains one of our important strategies to offset headwinds in U.S. wholesale by continuing to reduce our concentration in that channel."

And that's where building out its own retail footprint comes into play, both in physical stores and on its website. Bergh said because direct-to-consumer sales in the U.S. rose 7%, it was "the best indicator of the Levi's brand strength in the market." Global revenue growth from its brick-and-mortar stores was 10% greater in the quarter.

It's not a panacea

So despite the retail channel looking like a risky bet on the surface, digging deeper shows that it might be a safer play than trying to rely upon department stores or chain stores. And the off-price channel is a definite no-go for Levi Strauss, since it's only willing to use it to get rid of severely distressed inventory, such as its Dockers brand that it's been clearing out.

Yet don't expect any improvements to show up soon from going more heavily into the direct-to-customer channel. Levi Strauss said that the back half of the year is going to be less robust than the first six months, and there will likely be a hangover at least into the first quarter of 2020.

Still, analysts believe denim has a bright future as consumer tastes pivot away from athleisure wear, meaning as a long-term driver of growth, Levi Strauss building out more stores and dealing directly with its customers could be a bet with a big payoff.