Seagate Technology (NASDAQ:STX) is one of the few companies left that makes hard disk drives, and the industry leader with a roughly 45% market share. It's also a value stock, trading at just 11 times forward earnings estimates, with a 4.8% dividend yield to boot.

Not only that, but the storage giant just recently announced plans for a 3% dividend increase that will take place later in January. Seagate has kept its payout steady for the past few years, so the resumption of dividend growth is an encouraging sign. 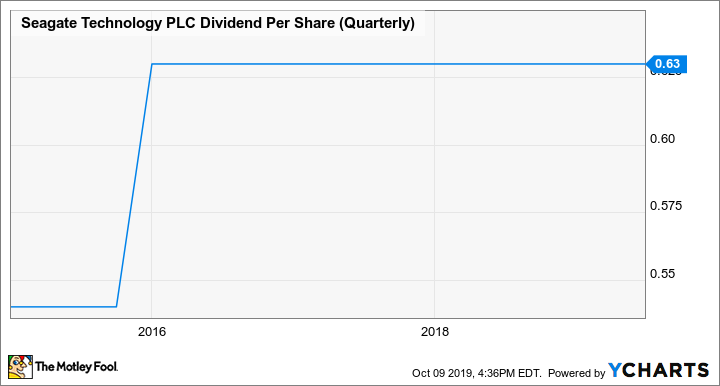 It's doubly encouraging, because Seagate tends to operate under a cloud of pessimism due to the ascent of NAND flash technology, which some think could replace HDDs one day. But does management's dividend hike and the low share price mean investors have the "all clear" to buy Seagate stock today?

Overall, the data storage industry looks attractive. Consider that in 2002, 23 exabytes (23 billion gigabytes) of digital data were created. Today, that amount of data is created every five hours. While not all of it will need to be stored for an extended period of time, a significant portion will be. In fact, the total storage base is forecast to triple just in the next six years, reaching 17 zettabytes (17,000 exabytes) by 2025. Seagate management believes HDD demand will grow at a compound annual growth rate of 17% over that period.

Yet despite these favorable prospects, Seagate's management is only forecasting annualized revenue growth of 2% to 6% over the next few years, and the stock still trades at a low valuation. So what gives?

Competition from SSDs -- a real or irrational fear?

Perhaps the biggest risk holding back Seagate's valuation is the long-term threat from NAND flash.

Hard disk drives remain the cheapest form of data storage, but NAND flash technology is closing the gap quickly -- prices have tumbled by about 80% over the past two years.

Given NAND flash's greater resilience, speed, and lower power requirements, many businesses are switching over to it. In fact, flash-based solid-state drives have begun replacing hard disks in PCs and enterprise use cases. Industry consultant Rob Peglar believes SSDs will eventually take over enterprises almost entirely by the mid-2020s. However, the HDD industry will be saved by hyper-scale cloud data centers, which are still forecast to buy more HDDs due to the cost requirements of their enormous storage needs.

Seagate's management is, unsurprisingly, more optimistic than that, believing that HDDs will continue to play a role across three major applications: on-premises data centers, cloud data centers, and edge computing data centers. They forecast that HDDs will retain about 80% of the mass-capacity storage market for the foreseeable future. So what makes Seagate optimistic? 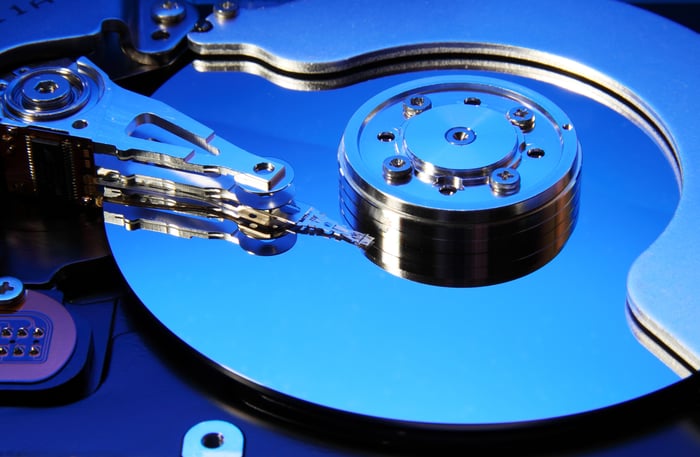 Can Seagate keep growing into the next decade? Image source: Getty Images.

Importantly, Seagate is in the midst of a transition to new technology: heat-assisted magnetic recording (HAMR) disk drives. HAMR disk drives have been years in the making but are set to hit the market in volume next year. The tech will increase hard disk drives' density -- and thus lower their cost-per-bit -- at a roughly 20% annualized rate over the next decade. That's in comparison with the 10% annual density increase the HDD industry averaged since 2012.

The costs for NAND flash are expected to fall at about the same rate, so HAMR technology will help HDDs maintain their price advantage for the foreseeable future. Therefore, hard disks should remain relevant for some time to come in large-scale storage deployments.

For dividend growth investors, Seagate's formidable market share in the consolidated HDD industry should be appealing, as it will allow the company to achieve moderate cash flow growth over at least the next decade. And Seagate's profits, while cyclical, tend to be much less volatile than those of either DRAM or NAND flash makers.

In addition to that relative stability, management projects average revenue growth of between 2% and 6% annually over the long term, due to increasing demand and lower prices per bit, plus stable operating margins of between 13% and 16%, roughly in line with where they've been recently. Management also intends to distribute more than 50% of the company's cash flow to shareholders via dividends and stock repurchases.

Seagate's balance sheet is also in pretty good shape, with just about $2 billion in net debt -- a quite manageable number for a company that consistently generates over $1 billion in free cash flow annually.

Its debt position is much better than that of rival Western Digital, which levered up to get into the NAND flash business with its acquisition of SanDisk back in 2016. Nevertheless, Seagate doesn't have NAND flash technology, and if for some reason NAND makes great strides against hard disk drives, Seagate could find itself committed to a declining business.

However, that's unlikely to happen for quite some time, especially given the imminent arrival of HAMR drives on the market. As such, Seagate will probably remain a promising dividend stock for the next decade. Investors shouldn't expect huge gains, as the company's limited portfolio will likely put a lid on its growth and valuation multiple, but stable cash flow, ample share buybacks, and generous and rising dividends all seem to be in the cards.