There was a lot to like in Levi Strauss' (NYSE:LEVI) third-quarter earnings report, but weak sales performance in the U.S. wholesale business (30% of total revenue) continued to drag on the top line. Slow traffic at department stores and retail store closures caused revenue in the Americas region to fall 3% year over year. This has been the main issue weighing on the stock, which is down 22% from the closing price on its first day of trading in March.

Still, there are plenty of signs that show the core strength of the Levi's brand is holding up well. Overall, total revenue for the quarter increased by 4% year over year, driven by double-digit growth in the direct-to-consumer channel, including company-operated stores and online sales. Growing the direct-to-consumer (DTC) channel is one of management's top priorities, as it not only offsets the decline in the U.S. wholesale channel, but it also increases brand relevance in the marketplace. 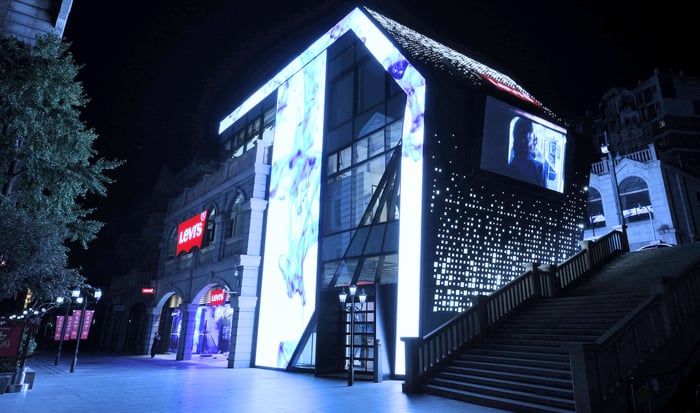 However, higher taxes and investments in company-operated stores weighed on the bottom line, with net income falling 4.2% to $124.2 million for the quarter. But Levi's is still on track to meet its full-year guidance of mid-single-digit revenue growth and a slight increase in adjusted gross margin.

Our strategies to diversify to faster-growing, high-opportunity, high-gross margin businesses continue to drive momentum, as we again grew revenues double-digits internationally, in our direct-to-consumer business, and in the women's and tops categories.

Here's a look at how a few of those "high-opportunity" businesses performed last quarter.

Bergh's statement underscores the real strength of the business. The DTC business in the U.S. grew 7%, while global DTC growth was even stronger, up 12% on a constant-currency basis. This marked the 15th consecutive quarter of double-digit growth for the channel.

In the long run, the strength of the DTC channel should allow Levi's to improve its margins. This latest quarter was a good example, as demand for Levi's products led to growth across all full-price stores in the quarter, which is helping the company "move toward premiumizing the marketplace," as Bergh explained.

One way Levi's is building its brand relevance is through collaborations with other top brands, including Nike, Walt Disney, and Alphabet's Google. These partnerships have led to cross-branded limited-edition sneakers, Star Wars apparel, and the Levi's Trucker Jacket with Jacquard by Google. These items don't move the needle much, but the hype around these releases is great marketing for the brand. The recent launch of the limited-edition Nike-Levi's sneakers sold out in three days.

The U.S. wholesale business will continue to be a headwind, but it's gradually becoming less relevant to Levi's operating performance. It made up nearly half of total revenue when Chip Bergh took over as CEO eight years ago, but now it sits at just 30%. Meanwhile, Europe and Asia are seeing growth from both the DTC and wholesale channels.

There are a few categories investors should watch closely going forward, which Bergh referred to as high-margin and fast-growing opportunities. Levi's reported 12% sales growth in women's and 17% growth in tops last quarter. Levi's is mostly known for men's denim, so there is a tremendous long-term growth opportunity in the women's category. DTC, women's, and tops have put together several quarters of double-digit growth, as the table illustrates, which will be crucial areas to watch as Levi's tries to overcome the near-term weakness in U.S. wholesale.

The consistent double-digit growth in tops is encouraging. It shows Levi's brand power extending to other products besides men's jeans. The 17% growth last quarter was balanced across men's and women's, driven by trucker jackets, sweatshirts, and t-shirts. The upcoming Star Wars-branded apparel, which launches on Nov. 1, should drive sales in tops in the fourth quarter, especially with the launch of Disney+ and the new Star Wars movie to drive awareness.

Analysts expect Levi's to post earnings per share of $1.06 in 2019, before increasing to $1.18 next year. Levi's will need to show strong earnings growth over the next year to justify its forward price-to-earnings ratio of 16. There are many top retail brands trading at lower earnings multiples right now.

With the U.S. wholesale market continuing to pressure top-line growth, shares of Levi Strauss could be volatile in the short term. But year-over-year comparisons for the wholesale business will be more favorable starting in the fourth quarter, and that should set the company up for improvement heading into 2020.