Commodity giant BHP is going to have a tough couple of years in the oil sector, but it isn't giving up on black gold just yet.

Broken Hill Properties, better known as BHP (BHP 0.74%), is one of the largest miners on earth. However, it doesn't just dig for iron ore, copper, and coal -- it also drills for oil. Recent moves suggest that BHP is pulling back on its oil bet, which is true to some degree, but the company is hardly giving it up. The trouble is that weak oil prices are only one of the problems it's dealing with in the oil sector. Here's what you need to know about BHP's oil prospects.

Getting out from under a bad deal

In mid-2018 BHP sold onshore U.S. unconventional oil assets (shale oil properties where fracking is the primary method of extraction) to BP, the company formerly known as British Petroleum. The price tag was a hefty $10.5 billion, which sounds like a huge sum of money. 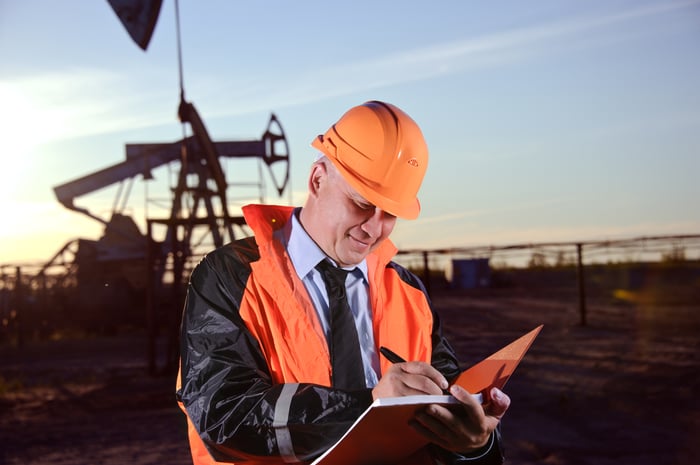 The fly in the ointment is that BHP paid roughly $20 billion for the asset back in 2011. To be fair, oil prices were higher then, and U.S. shale was considered a hot property. Still, BHP sold that asset for much less than it paid, which isn't a comforting outcome. And while it pulled oil out of the ground for six or seven years, it also plowed another $20 billion into the asset while it owned it, according to Reuters. So the financial hit was probably even bigger than it would at first appear.

BHP has, indeed, been burned. But it gets worse. Not only did the company jettison this asset at a big loss, but production growth in fiscal 2020 is expected to fall between 4% and 9% year over year. That's a terrible number, driven by natural well declines (oil fields are depleting assets, so every barrel you pull from the ground reduces the amount left) and planned maintenance at a key energy business. If that weren't bad enough, BHP is projecting oil production to hover at around 110 million barrels of oil over the "medium term," which is equal to the low end of that production range estimate for 2020. So there's no near-term pick up in the cards here.

A big asset sale, low oil prices, and weak production. It would seem like BHP has pretty much given up on oil. But that's not true -- this is just a lull as it refocuses around oil assets that play to its strengths. And that means more traditional wells.

The interesting thing about unconventional U.S. oil wells is that they are fairly quick to bring online. That's one of the reasons why ExxonMobil has been focusing on the area lately in an attempt to help offset production declines while it builds out more traditional oil assets. Traditional assets, like offshore oil wells, take more time to build, but are often highly profitable and tend to have longer reserve lives than U.S. shale assets. As an oil-focused company, Exxon kind of has to make this sort of decision. Oil is only around 15% of BHP's EBITDA, so it has other businesses to fall back on while it invests for a better oil future.

And it is still investing in oil, where its EBITDA margins have been around 64% recently. That's roughly in line with the 65% EBITDA margins it has been seeing in iron ore, the company's largest and best performing division. So there's good reason to keep investing in oil and, frankly, to key in on the oil assets where BHP thinks it can make the most of its investments.

In fact, between fiscal years 2017 and 2019, the company's exploration efforts have produced material results. It has increased its contingent resources, meaning oil it believes it can pull from the ground, by 55%. The problem is that finding oil is only step one of the process -- now BHP has to actually build out the operations to extract that energy. And that just takes time.

The company has notable projects that are expected to start producing oil in fiscal years 2020, 2021, and 2022. And there are more opportunities beyond these projects as well. In fact, half of the projects management reports as "high return" are in its petroleum business. The big takeaway, however, is that oil is still a very important business to BHP, and a sizable portion of its $8 billion capital spending plans are going to the energy space. So while there's likely to be a production lull over the near term that unfortunately coincides with weak oil prices and a big asset sale, BHP is clearly investing for a better oil future.

A few years ago BHP spun off South32 to help streamline what had become a bloated portfolio of commodity businesses. It has also faced investor pressure to get out of oil. But it is sticking with the energy business, instead focusing on putting its efforts into the areas where it believes it can achieve the best returns. That's not really different from what it did with the South32 move, only in oil it will take a few years to get the business back on track. If you are a dividend investor looking at BHP and its hefty 5.5% dividend yield, make sure to watch the oil business. Sure, iron ore is the most important division, but oil's fortunes aren't nearly as dismal as they seem today.