Facebook's (NASDAQ:FB) Instagram recently launched Threads, a stand-alone messaging app that lets users start individual or group chats. Users can send vanishing photos and short videos, and let the app automatically update their status with messages like "at the gym" or "on the move" without revealing their actual locations.

Threads is clearly aimed at countering Snap's (NYSE:SNAP) Snapchat, Instagram's top competitor in the Gen Z market. That's why Snap's stock dipped when reports about Threads surfaced in late August, and why it fell again after Facebook officially launched the app.

However, recent data from Apptopia indicates that those fears were overblown. The research firm claims that only 220,000 people, or less than 0.1% of Instagram's users, downloaded Threads within the first week. 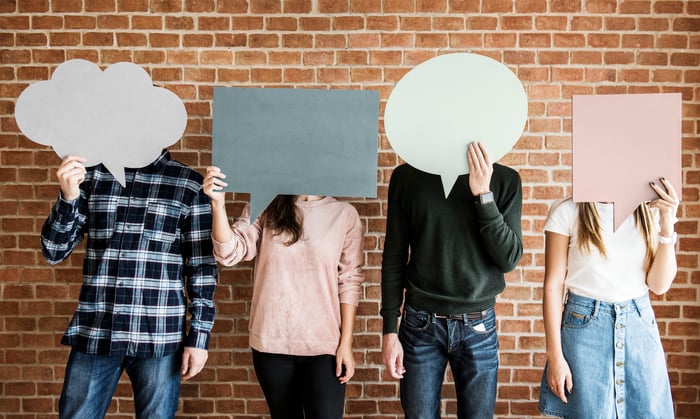 That performance was dismal compared to Instagram's IGTV and Boomerang apps, which hit 1.5 million and 2.8 million downloads, respectively, in the first week. This indicates that Threads will remain a minor secondary app for Instagram instead of a "Snapchat killer." Let's see why Threads is unraveling, and what it tells us about Facebook's fear of Snapchat.

Does anyone need another messaging app?

Threads isn't gaining any momentum because there are simply too many messaging apps on the market. Facebook's own ecosystem already includes Messenger, WhatsApp, and Direct messages in Instagram.

The rest of the market is fragmented among smaller rivals like Snap, regional leaders like Tencent's WeChat and Line, and privacy-oriented platforms like Telegram. There's no reason for users to download another messaging app like Threads, especially when it lacks any compelling new features.

More importantly, Instagram users can already message their friends in the main app, so there's no demand for another stand-alone app. Instagram already tried this before with its stand-alone Direct app, but the app peaked at just 1.35 million downloads on iOS and Android, according to Sensor Tower, before being discontinued earlier this year.

Threads is just a rebooted version of Direct with a few minor tweaks like tighter access to a smaller circle of friends and automatic status updates -- which are more intrusive than innovative. It also doesn't add any filters, GIFs, or stickers, which seems odd for a Snapchat competitor.

Instagram isn't forcing its users to download Threads, as Facebook did with Messenger five years ago. Direct and Threads still run on the same messaging platform, so users can still message each other from both apps. Facebook is trying to leverage Instagram's popularity to boost Threads' adoption rate, but it also makes Threads a redundant app for most Instagram users. 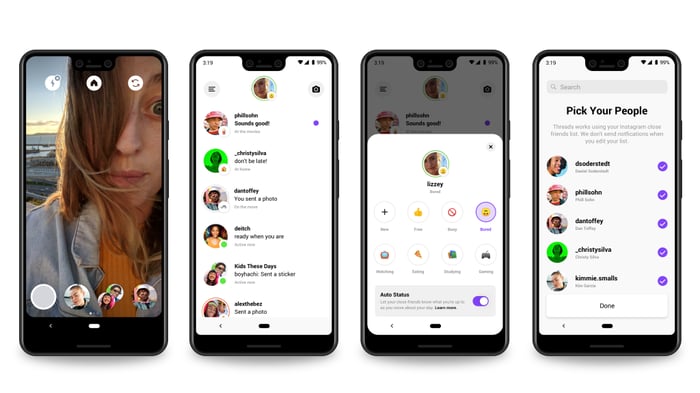 Another Snapchat clone bites the dust

Facebook is obsessed with beating Snapchat because it remains a top platform for teens in the United States. Piper Jaffray's latest "Taking Stock with Teens" survey, which polled 9,500 teens about their favorite brands, found that Instagram and Snapchat had engagement rates of 85% and 81%, respectively -- making them the top destinations for advertisers targeting Gen Z consumers. Facebook's core platform had an engagement rate of just 31%.

Meanwhile, Facebook's growth in the U.S. and Canada, its two most profitable markets, is decelerating as it faces a series of privacy, security, and fake news debacles. That's why Facebook is tightening its grip on Instagram, which is growing at a faster rate and locking in younger users.

To ensure Instagram's continued growth, Facebook needs to push Snapchat out of the way. Unfortunately, none of Facebook's attempts over the past seven years -- including its Snapchat clones Poke and Slingshot, its anonymized teen polling app Tbh, vanishing messages and filters for Instagram, and Direct -- stopped its smaller rival.

Last quarter, Snapchat's daily active users (DAUs) grew 8% annually to 203 million, as its redesigned Android app and expansion of its Discover platform won over and locked in new users. Most of those users are in the U.S. eMarketer expects over a quarter of the U.S. population to use Snapchat at least once a month this year -- which indicates that it won't lose its core Gen Z market to Instagram anytime soon.

Facebook realizes that it's losing younger users to Snapchat, but it still hasn't figured out how to win them back. Instead, Facebook's tighter integration of Instagram into its core app will likely alienate Gen Z users, while odd stand-alone apps like Threads will fail to take off.

Instead of bombarding users with new messaging apps, Facebook should focus on improving Instagram's features (like its shoddy IGTV platform), expanding the app's e-commerce capabilities, and letting it flourish as a stand-alone app. Those strategies -- not flimsy Snapchat clones -- will widen its moat against Snapchat.