Please ensure Javascript is enabled for purposes of website accessibility
Log In Help Join The Motley Fool
Free Article Join Over 1 Million Premium Members And Get More In-Depth Stock Guidance and Research
By Adam Levine-Weinberg - Oct 14, 2019 at 8:38AM

Spirit Airlines stock has been beaten down over the past few months, due to the company's weak forecast for the third quarter. However, the stock started to recover on Friday after Spirit boosted its quarterly guidance.

In late July, Spirit Airlines (SAVE -0.45%) provided a disappointing forecast for the third quarter of 2019, implying that its profit margin would contract and adjusted earnings per share would be roughly flat year over year, despite the airline's double-digit capacity growth. The airline's forecast got even worse in an early September guidance update, primarily due to the impact of Hurricane Dorian. As a result, Spirit Airlines stock plunged by about 40% between late July and early October.

Fortunately, Spirit performed better in September than it had expected at the beginning of the month. As a result, the company was able to improve its Q3 forecast late last week. That news sent Spirit Airlines stock soaring as much as 11% on Friday, before ending the day with a 6% gain. 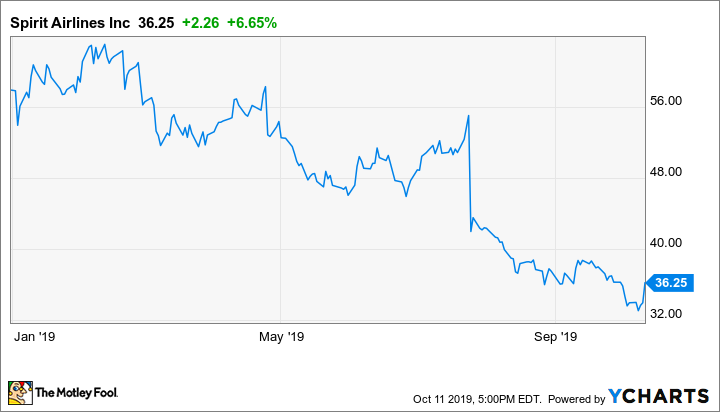 Spirit's Q3 outlook had been quite poor

Spirit Airlines grew revenue per available seat mile (RASM) 4.5% year over year in the first half of 2019, while managing its costs well. As a result, adjusted EPS soared 63% to $2.53.

By contrast, management's initial guidance for the third quarter called for RASM to be roughly flat year over year -- plus or minus 1% -- and for nonfuel unit costs to surge 7% to 8% due to a runway closure in Fort Lauderdale, Florida, and poor operational performance. (Spirit's recent downturn in operational performance has been driven by an unfortunate combination of aggressive scheduling and frequent severe weather events.)

Spirit Airlines reduced its forecast further in early September, after Hurricane Dorian added to its woes. At that time, the company said that it expected a 2.5% to 3.5% RASM decline and a 9% to 10% increase in nonfuel unit costs for the quarter. Based on that guidance, analysts were recently projecting that Spirit's EPS could be as low as $1.05 in Q3, down from $1.47 a year earlier. Three months ago, the average analyst estimate stood at $1.84.

September wasn't as bad as expected

On Thursday afternoon, Spirit Airlines improved its third-quarter forecast significantly. The company said that RASM fell by about 2% last quarter -- worse than its initial outlook but ahead of its updated guidance -- as Hurricane Dorian did not disrupt bookings as much as expected. Additionally, Spirit said that adjusted nonfuel unit costs rose by about 8.5%. This, too, was worse than its original forecast but better than what it had expected as of early September. Management said that operational performance improved in September despite the continuing drag from severe weather. Spirit Airlines also reduced its fuel cost estimate to $2.08 per gallon from $2.13 per gallon previously.

It may take a few quarters for Spirit to regain its earnings momentum. Nevertheless, investors (and analysts) have been too quick to abandon Spirit Airlines stock. (Indeed, even after Friday's rally, the shares trade for less than eight times earnings.)

Over the next year or so, Spirit Airlines should be able to return to strong earnings growth by getting costs under control again, upgrading its fleet with fuel-efficient new Airbus A320neos, and cutting underperforming routes. The rollout of in-flight Wi-Fi and an updated loyalty program should also start to boost unit revenue next year.

In the long run, Spirit's superior cost structure should enable the carrier to continue growing rapidly while maintaining a double-digit pre-tax margin. Based on this opportunity, Spirit Airlines stock could easily be worth twice its current price.