Ford Motor Company (NYSE:F) said that its sales in Europe's key markets rose 3.1% from a year ago, outpacing the overall market's gain, on strong sales of SUVs and commercial vehicles.

Through September, Ford's sales in the region were down 2.4% from the same period in 2018.

Ford reports several sets of sales results for Europe. For Ford investors, the most important number here is what Ford calls the "Euro 20," the 20 countries in western and central Europe that Ford thinks of as its key markets in the region. It's also worth looking at results for all of Europe, including the countries of eastern Europe, Turkey, Russia, and the former Soviet republics. (Ford refers to the larger group as the "Euro 50.") 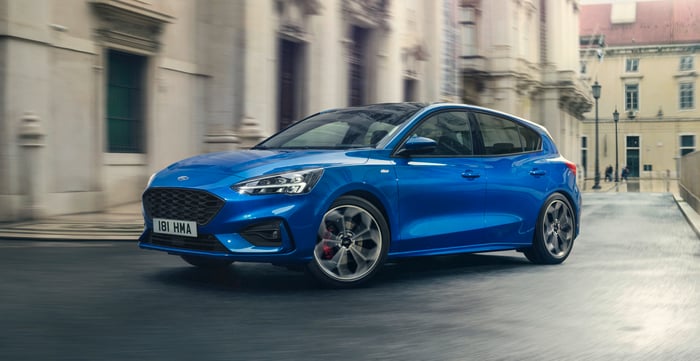 Ford stopped selling the Focus in the U.S., but an all-new version launched last year is one of its top sellers in Europe. Image source: Ford Motor Company.

What's working for Ford in Europe

Here are the result for Ford's six best-sellers in Europe in the third quarter of 2019.

Data source: Ford Motor Company. Sales totals are for the Euro 20 region and are rounded to the nearest hundred.

What does this mean for Ford's third-quarter earnings?

Back in January, Ford announced a restructuring plan for Europe, after Ford Europe lost $245 million in the third quarter of 2018. The plan includes job cuts, a consolidation of headquarters functions, cost reductions in manufacturing, and an overhauled product lineup.

The plan has already had an effect: After three consecutive money-losing quarters, Ford Europe returned to profitability in the first and second quarters of 2019, even though its sales in the Euro 20 were down 4.8% over that period.

So what should we expect when Ford reports its third-quarter earnings on Oct. 23? Ford is unlikely to report a huge profit in Europe this time around. But I think the restructuring effects, plus Ford's improved mix year over year, should have been enough to put it in the black. A small profit (around $50 million, give or take) seems likely.