Please ensure Javascript is enabled for purposes of website accessibility
Log In Help Join The Motley Fool
Free Article Join Over 1 Million Premium Members And Get More In-Depth Stock Guidance and Research
By Matthew DiLallo - Oct 16, 2019 at 9:34AM

This steady dividend growth has given these stocks the power to outperform.

The first thing most dividend investors look at in an income stock is its yield. While the payout matters, an even more important factor is dividend growth.

Three that stand out are infrastructure operator Brookfield Infrastructure Partners (BIP -0.96%), MLP Magellan Midstream Partners (MMP -0.46%), and utility Dominion Energy (D 1.22%). Each company has increased its dividend for at least the last decade. Meanwhile, all three have plenty of fuel to continue growing their high-yielding payouts in the coming years. 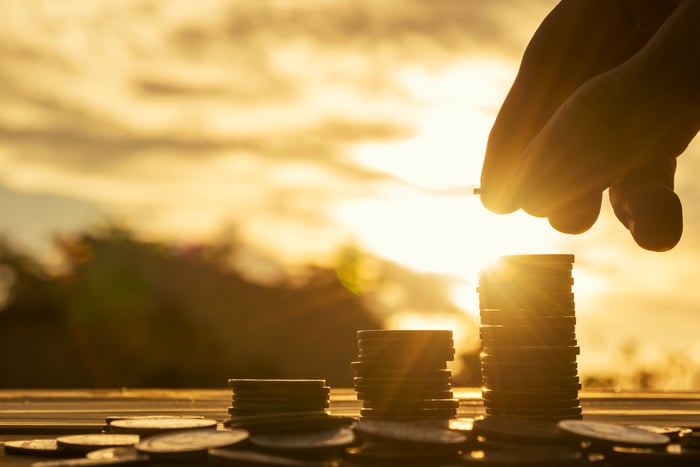 Double-digit growth for a decade

Brookfield Infrastructure Partners has increased its investor payout every year since it became a publicly traded company in 2008. Overall, the global infrastructure operator has grown its dividend at an 11% compound annual rate. Because of its consistent high-rate growth, the company has generated an impressive total return of 565% over the last decade. That has crushed the S&P 500's 283% total return during that timeframe.

Brookfield Infrastructure shouldn't have any problem continuing to increase its payout in the coming years. It currently estimates that its organic growth drivers alone should expand its cash flow per share by a 6% to 9% annual rate. Meanwhile, the company has plenty of additional upside as it makes more acquisitions, which could enable it to grow cash flow faster. Because of that, Brookfield should be able to deliver on its plan to increase its 4.2%-yielding payout by 5% to 9% per year for the foreseeable future.

Magellan Midstream Partners has increased its distribution to investors 69 times since its IPO in 2001. While the midstream company did pause growth for five quarters during the depths of the financial crisis, it has increased it every year in the decade since that market meltdown. Overall, the company's distribution has grown at a 12% compound annual rate since 2001. That high-octane growth has enabled Magellan Midstream to produce a 440% total return in the last decade, easily beating the S&P 500.

The MLP expects to have plenty of fuel to keep increasing its payout in the coming years. It currently has $1.25 billion of expansion projects under construction and more than $500 million of additional ones in development. As those projects come online, they should provide Magellan with the fuel to increase its 6.2%-yielding payout by around a 5% annual rate in the coming years.

Dominion Energy has been an exceptional dividend stock over the years. The utility recently paid its 366th consecutive dividend and has increased its payout in each of the last 16 years. That consistent dividend growth has given Dominion the power to generate a 252% total return over the past decade, which has beaten the S&P 500.

The utility expects to continue increasing its dividend in the coming years. However, it does anticipate slowing its growth rate down in 2020 and beyond. After boosting its payout 8% in 2017 and 10% in both 2018 and 2019, Dominion plans on increasing its dividend by about 2.5% per year starting in 2020, even though its earnings should expand by more than 5% annually through at least 2023. That's because it wants to reduce its payout ratio from its current level of 87% of its earnings down closer to its peer group average of less than 70%. That more conservative strategy, however, will enhance the long-term sustainability of Dominion's payout, increasing its ability to grow its 4.5%-yielding dividend in the future.

This trio of dividend-paying stocks have raised their payouts every year for the last decade. That's given them plenty of power to outperform the S&P 500. While that past success is no guarantee of future performance, all three believe they can continue increasing their dividends in the coming years, albeit at a slower pace. Still, that steady dividend growth, when combined with their above-average yields, should enable all three companies to generate attractive total returns over the next decade.