Please ensure Javascript is enabled for purposes of website accessibility
Log In Help Join The Motley Fool
Free Article Join Over 1 Million Premium Members And Get More In-Depth Stock Guidance and Research
By James Brumley - Oct 16, 2019 at 10:30AM

Analysts are starting to change their minds, but they've not fully articulated how or why Juniper will be able to uproot Arista.

Roles have seemingly reversed for Arista Networks (ANET 2.53%) and Juniper Networks (JNPR 5.00%). A year ago, Wall Street had the former on a pedestal, touting its strong double-digit growth pace for its high-end networking solutions, while the latter was seemingly anemic, still logging lower revenue and earnings. Now Juniper is basking in its recent upgrade that predicts rekindled growth, while Arista has been hounded by a downgrade, suggesting its best days are behind it.

Then there's the not-so-small argument that Arista is just the better company.

What analysts said about Juniper and Arista

Instinet analyst Jeffrey Kvaal made the call earlier this month, downgrading Arista from a buy to a neutral rating because there's "too much turbulence for now for this long-term share gainer." That turbulence includes tough comparisons in 2020 to impressive 2019 results and an environment that could lead to a loss of the company's share of the webscale market.

Just a few days prior, in late September, Needham analyst Alex Henderson offered up a much-needed glimmer of hope for patient shareholders of Juniper Networks, explaining,

We are upgrading JNPR to a Buy from a Hold and setting a $29 PT, which equals a 13x EV/E multiple on our CY20 estimate. We came away from our visit with Juniper thinking the dynamics in the optical markets may give them some renewed life after several years of persistent declines. At a minimum, the CY4Q19 and CY1H20 comparisons look easy. We think Juniper will stabilize its results in CY3Q and post a return to yr-yr growth in CY4Q.

Both points are well taken. Arista has appeared to enjoy almost too much leadership for a little too long in its target markets with its high-end hardware/software solutions, while Juniper's slump has been oddly persistent. Nothing lasts forever. And were these almost any other stocks under any other circumstances, such assumptions would hold water.

In this case, though, the scenario is complicated enough that even analysts aren't seeing the full picture. That sets the stage for the less likely outcome to pan out.

A body in motion, a body at rest

The two organizations may be in the same business, and both have a common competitor in Cisco (CSCO 5.81%). But Juniper and Arista are hardly carbon copies of one another. Arista's core strength is networking switches largely controlled by software. It's a lower-cost option than more conventional routing solutions, which is why the company has landed so many large-scale customers. Although Juniper is now following Arista into the software-powered router market (followed by Cisco, by the way), it has plenty of catching up to do.

Broadly speaking, Needham's Henderson and Instinet's Kvaal are indirectly saying Juniper has finally figured out how to compete with Arista. For the record, though, they're largely alone in their stances.

The charts below tell the tale. Arista only has to continue doing what it's doing, and Juniper clearly has to do something dramatically different to snap out of its rut. 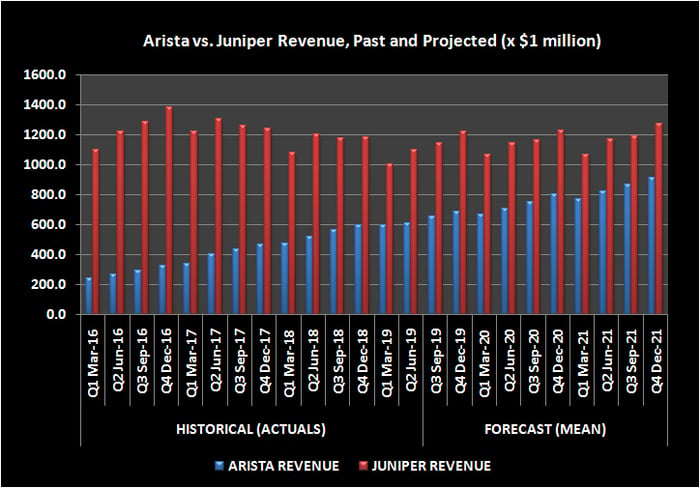 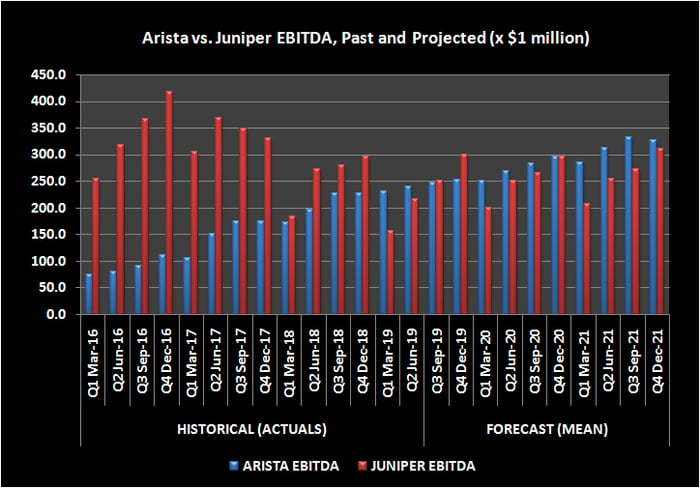 A small shift in any of these trajectories won't be enough to make Arista unworthy or make Juniper a must-have. It's going to take a sweeping shift to sway investors' bigger-picture perceptions. There's no sweeping shift on the horizon, even though both stocks seem primed for such a change.

Don't misread the message. Instinet made a great point about Arista, and Needham's view of Juniper's foreseeable future has merit. Investors would be wise to add either possibility to their personal due diligence performed on either company.

It's a bit of a stretch to assume a leading tech company can't remain in the lead for a long while, though, just as it's a stretch to assume a laggard will inevitably dig its way out of a hole. In the end, networking customers make purchasing decisions for myriad reasons that include price, functionality, and reliability. Corporate and government campuses just want solutions that work, and Arista still brings a superior solution to the table.

The proof of that pudding: Gartner rated Arista Networks above Juniper as well as Cisco in this year's data center networking report card, while in early 2018, Forrester rated Arista higher than Juniper and Cisco among providers of software-defined networking solutions.

In short, Arista has the edge here. The recent rhetoric appears to be calling for a change in leadership just for the sake of change, and it's rooted in relative valuations. But that's not always a great bet. In the end, the market rewards a quality company with a premium price and doesn't inherently reward a cheap stock of a subdued company.