J.B. Hunt Transport Services (NASDAQ:JBHT) released fiscal third-quarter 2019 earnings on Tuesday after the markets closed for trading. Prior to the filing, the performance of intermodal services was perhaps the biggest question hanging over the third-party logistics (3PL) provider's results. As we'll discuss below, the intermodal business generated solid, if not spectacular, numbers, but this was enough for investors to focus on other positive aspects of the report: Shares of the freight investment were up nearly 5% during the Wednesday trading session. Note that all comparative numbers in the discussion that follows are presented against the prior-year quarter. 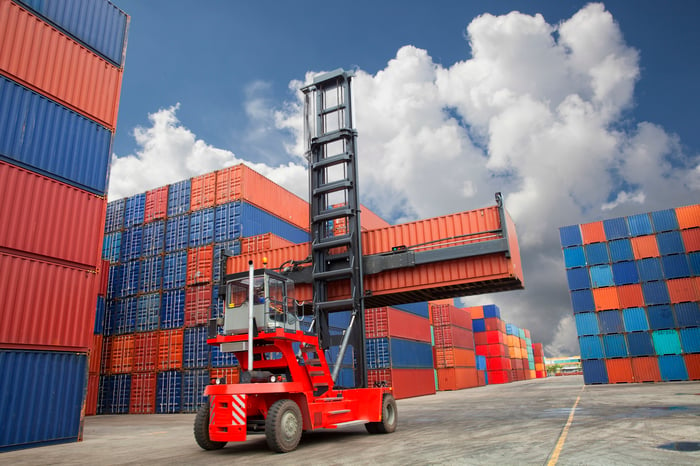 In J.B. Hunt's earnings conference call, CEO John Roberts informed investors that management intends to discuss strategic initiatives in more detail each quarter. In this vein, Roberts provided a high-level overview of each of the company's segments.

Roberts observed that rail lane closures were moderating, supporting the stabilization of intermodal volumes going forward. The CEO also disclosed that due to both acquired and organic growth in FMS, the business will be broken out as its own segment in fiscal 2020.

The DCS accelerated its organic growth through the past two years, reaching unprecedented contracted expansion in unit counts and revenues. As expected, the implementation expenses related to strong growth have mitigated over time, and we expect the core business in private fleet services to return to targeted margin performance. We also expect continued organic growth in this channel of private fleet creation and conversion.

Highway services, including our truckload business and all brokerage services, continues to migrate to a more digital and lighter asset model, moving toward independent contractors and contract carriers with our capital focusing on the trailer fleets. They're exploring new and different ways to approach the trailer needs of our customers and carriers with the 360 [platform] programs and hope to find the right equation to expand this opportunity.

As we head into the fourth quarter and look ahead to fiscal 2020, J.B. Hunt boasts a number of growth opportunities, from its expanding Marketplace 360 platform to the utilization of additional truck capacity the company has added over the last year. At the next reporting period, however, investors will look for management's perspective on the external environment for the coming year, as Hunt's fortunes will depend in part on the strength of overall U.S. economic growth in 2020.