Please ensure Javascript is enabled for purposes of website accessibility
Log In Help Join The Motley Fool
Free Article Join Over 1 Million Premium Members And Get More In-Depth Stock Guidance and Research
By Lee Samaha - Oct 17, 2019 at 8:33AM

A detailed look at recent earnings from the industrial supplier and what they mean for the manufacturing sector.

The third-quarter earnings of industrial supply company Fastenal (FAST -0.62%) led to a double-digit increase in the share price on the day of their release (Friday 11th Oct) and raised the hopes of investors in the industrial sector. But was the jubilation justified? The numbers suggests there is reason for some cautious optimism, but it might not be from the area that many expected it.

Companies like Fastenal and MSC Industrial (MSM -1.42%) tend to set the tone for the industrial sector because they have extremely short sales cycles. In other words, as soon as manufacturing companies see a slowdown, the first thing they will do is cut back on buying supplies from Fastenal. 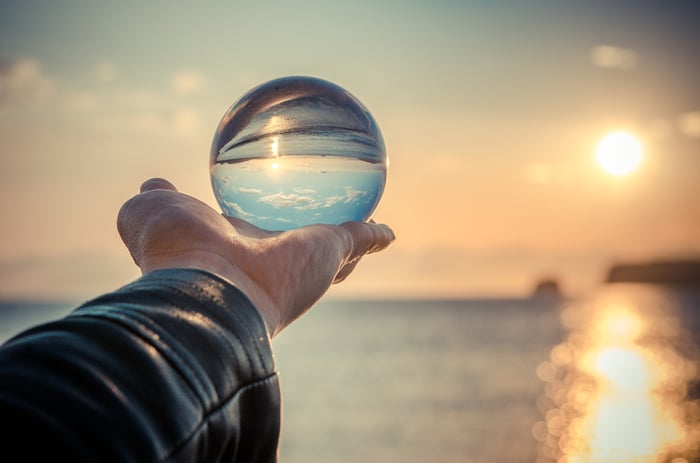 Indeed, the weak results from MSC Industrial and Fastenal in the previous quarter set the tone for a disappointing quarter of earnings from the industrial sector. That said, Fastenal's most recent results were broadly better than the market was expecting, so does that mean that end-market conditions have improved and investors won't have to prepare for a recession?

The reason for the optimism can be shown in the chart below, specifically the uptick in the last bar of the chart. The chart is a bit complicated, so bear with me while I take you through it.

Sequential monthly sales growth simply means the growth rate from one month to the next -- for example, from January to February in the same year. In this case, the benchmark (which the sequential sales growth rate is compared with in the chart) is simply the historical average sequential growth rate for the same periods in question. Therefore, when Fastenal's monthly average daily sales rate is higher than the benchmark (a positive number in the chart), you could argue that Fastenal is in a growth phase; when it's negative, Fastenal is in a slowdown.

In addition, it's important to note that overall performance -- and benchmarked performance -- can naturally bounce around from month to month because some sales can be delayed or pulled forward over the month. Nevertheless, as you can see below, there was a definite slowing in the April-to-August period, but it picked up in September. Let's look at why. 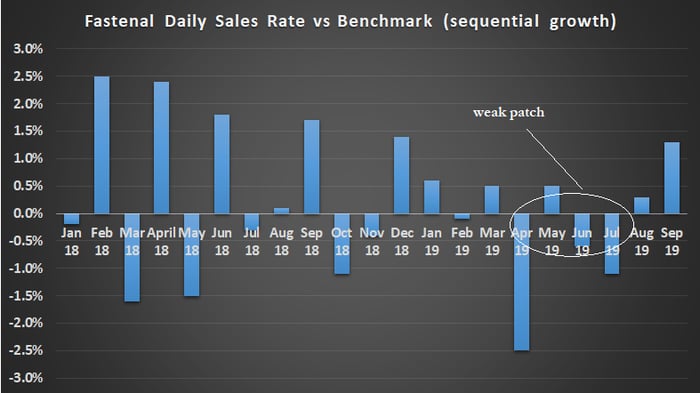 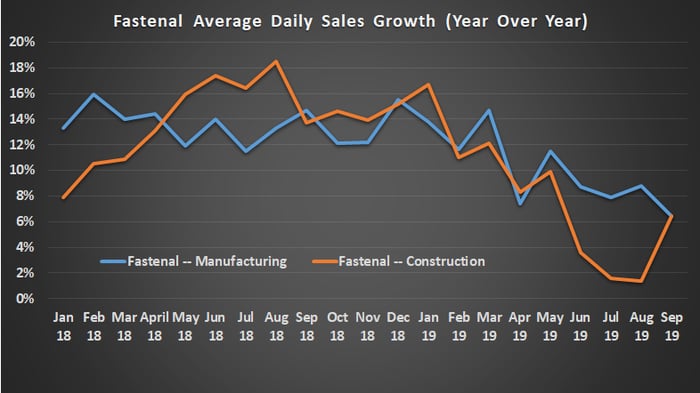 Second, Fastenal raised prices in the quarter, and as CEO Daniel Florness pointed out on the earnings call: "we did do a little bit better with pricing in the quarter, obviously. And I think that that kind of moved through as the quarter went on as well."

In other words, revenue was boosted a bit in September by pricing impacts, which could prove difficult to repeat.

Three reasons investors should be excited

Turning to a more positive perspective, there are three key points to note about Fastenal's earnings:

One swallow doesn't make a summer, and the construction sales growth in September isn't enough to encourage wide-scale optimism. Meanwhile, Fastenal's manufacturing sales data and management commentary indicate that the industrial sector continues to weaken. In short, Fastenal's earnings don't provide much succor for those hoping that manufacturing will avoid a recession.

On the other hand, a lot of negativity appears to be baked into many industrial stocks, and any relatively positive news could immediately reward long-term investors who have taken advantage of recent weakness to buy stock.

That's a good way to think about the upcoming earnings season. There are likely to be some guidance cuts, but merely maintaining guidance might be enough for many companies to see positive reactions.