Its GAAP earnings per share declined 15.3% to $1.22 due to the deconsolidation of its Canadian unit RBH and other one-time charges. On a non-GAAP basis, which excluded those charges, its earnings dipped 0.7% to $1.43 (but rose 5.9% on a constant currency, like-for-like basis), and topped estimates by $0.07.

Those charges also reduced the low end of PMI's full-year GAAP EPS forecast from $4.94 to $4.73. Its non-GAAP EPS forecast (which excludes RBH from both periods) remains unchanged at $5.14, which implies 6.2% growth from 2018.

PMI's shipments of cigarette and heated tobacco products declined 1.4% annually on a like-for-like basis during the quarter, and it expects that figure to drop another 1%-1.5% for the full year. That decline is disappointing, but there's a silver lining -- its heated tobacco shipments surged 84.8% annually and accounted for 8% of its total unit shipments. Let's discuss four key facts about this growing business and how it could offset PMI's declining shipments of traditional cigarettes.

1. Heating instead of burning

PMI's iQOS devices, which were introduced five years ago, are electronic devices that heat up a stick of tobacco instead of burning it -- which the company claims makes for a less harmful habit than smoking combustible cigarettes. A starter kit costs about $80, and packs of Heatsticks cost about the same as their corresponding cigarette brands.

PMI initially launched its iQOS devices in Japan and Italy, then gradually expanded them to over 50 global markets. The FDA recently approved the iQOS for sale in the US, where it's now marketed and sold by its partner Altria (NYSE:MO).

iQOS and other "heat not burn" devices aren't being scrutinized by regulators like e-cigarettes, which have been implicated in dozens of injuries and deaths. PMI has much less exposure to that troubled market than Altria, which took a 35% stake in e-cigarette leader Juul Labs last December.

PMI's heated tobacco shipments surged 90.6% annually in the first half of 2018 as vendors and consumers purchased more products (especially in Japan) ahead of excise tax-driven price hikes last October. That's why its shipments contracted in the second half of 2018 before rebounding sharply in 2019:

Profit margins for iQOS devices are also roughly 30%-50% higher than the margins for traditional cigarettes, and analysts expect iQOS higher-margin revenues to account for 15% of its net profits this year. 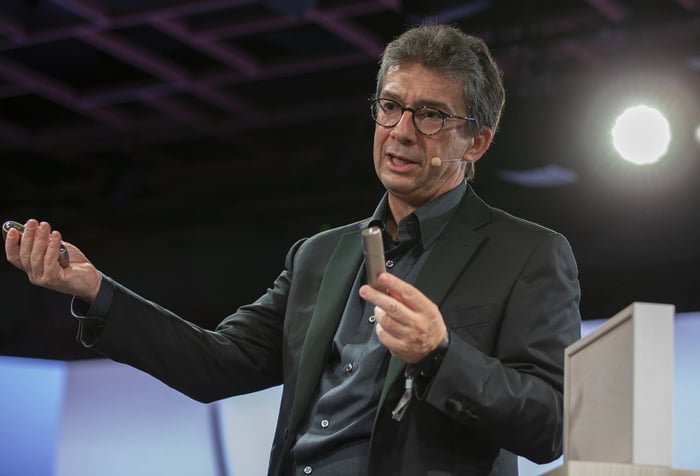 During the first nine months of 2019, PMI's heated tobacco shipments rose annually across all its global regions except the Middle East and Africa, where it faced tough comparisons to the previous year.

iQOS also claimed a 5.1% share of the smoking market in its commercialized regions, and it still hasn't expanded the business into South and Southeast Asia yet. PMI is likely delaying that launch to avoid cannibalizing its cigarette sales in the region (which has higher smoking rates than many other regions) -- but its eventual moves into high-growth countries (like Indonesia and Thailand) could become long-term tailwinds for iQOS.

PMI's development of iQOS was a smart move, and the business is evolving into a new growth engine for the aging tobacco giant. This makes it a more forward-thinking company than its domestic counterpart Altria, which clumsily invested in speculative e-cigarette and marijuana companies to revive its revenue growth.