GE investors were spooked by an analyst's report that challenged the consensus view on GE Aviation's valuation. Here's what it means to investors.

J.P. Morgan investment analyst Steve Tusa recently took aim at General Electric (NYSE: GE) Aviation and argued the case for a valuation significantly lower than most analysts'. The JP Morgan analyst's previous calls regarding GE have proven accurate, so it's probably a good idea for investors to take a stock check on GE Aviation and how it fits within GE's valuation. Here's what you need to consider before accepting the bearish case.

The analyst's forecasts are out of sync

In a nutshell, Tusa's view is that a decline in spare engine sales and margin pressure from a shift in aftermarket sales -- both connected to shifts in sales from the older CM56 engine to the LEAP -- will lead to a decline in GE Aviation profit to just $5.7 billion in 2020. 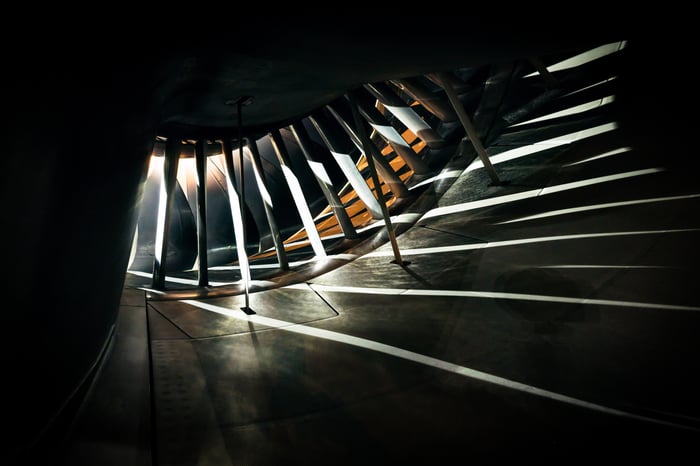 It's important to note that Tusa's forecast is a significant departure from the implied company guidance (which you can see below) and what the market expects. For example, management's guidance calls for high-single-digit revenue growth in 2019 and more growth the following year, with a margin of around 20% in 2020. Tusa's estimate is also significantly below the analyst consensus for GE Aviation.

It's also out of sync with the 8% revenue growth reported for GE Aviation in the first half of 2019. Moreover, GE Aviation's backlog of $244 billion in the second quarter (up from $223.5 billion in the first quarter) represents around eight years' worth of sales -- something that suggests a revenue/earnings growth slowdown isn't coming down anytime soon.

Why GE Aviation matters so much

No matter, let's assume that GE Aviation could disappoint market expectations in the future and see what it could mean for its valuation. There are two main ways to value the company. The first is to look at a near-term multiple of earnings or cash flow. This is an approach usually used for industrial conglomerates as their mix of businesses suggest they should be able generate cash flow through the business cycle. However, it's not really useful for GE right now as the company is going through significant restructuring.

An alternative view -- usually used for companies in long-cycle industries that need a lot of investment to produce products (aircraft engines, gas turbines) that generate earnings/cash flows over many years -- leads investors to use a so-called sum of the parts (SotP) analysis. In this way analysts value each segment of GE separately (on the basis of segment earnings or FCF) and then strip out corporate items and the net debt of the company (currently around $120 billion) in order to generate a valuation for its market cap.

As you can see below, such an approach (with either FCF or earnings) means ascribing the overwhelming share of total company enterprise value (market cap plus net debt) to GE Aviation -- don't forget that the healthcare segment will lose FCF due to the divestiture of the biopharma business to Danaher.

Adopting a SotP approach and using a conservative forecast for the "high case" in the table, suggests the conventional view that GE Aviation is worth around $100 billion is reasonable.

First, you need to estimate a valuation multiple for GE Aviation and industrial peers (3M and Illinois Tool Works), aerospace heavy conglomerates (United Technologies and Honeywell) and aerospace component maker TransDigm are useful comparisons. For reference, enterprise value, or EV, is just market cap plus net debt and EBIT is earnings before interest and taxes. 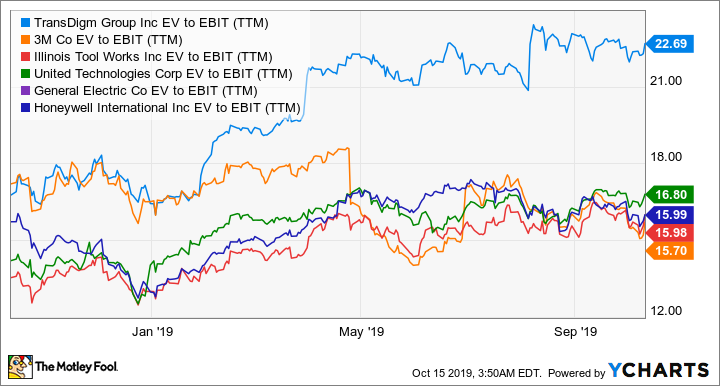 Now let's plug in some earnings expectations and multiples to see what it means for GE Aviation's valuation. As you can see below, according to this analysis, the worst-case scenario produces a valuation of $88 billion and the most optimistic outlook produces $153 billion. Moreover, there is a difference of $39 billion based on whether you use Honeywell or TransDigm's multiple.

Data source: TransDigm and Honeywell multiples from chart above.

All told, Tusa may indeed turn out to be right, and one immediate area of concern is that GE Aviation's segment margin of 19.2% looks a little behind full-year guidance for around 20%, but unless GE Aviation's earnings really do fall over a cliff in the coming years than an EV valuation of $100 billion looks reasonable.

There isn't any evidence yet of the kind of slowdown necessary to get to the pessimistic case in the model above, so investors should still look at GE Aviation in a positive light.