Sure, procedures were up -- but these factors are just as important.

As has been the case for almost five years now, Intuitive Surgical (ISRG 4.48%) reported another impressive quarter Thursday night. The company's da Vinci robotic surgical system has truly become the standard-bearer for minimally invasive surgery. That has helped Intuitive earn a special place in the hearts of healthcare investors.

While there were, as always, lots of details to keep track of in the third-quarter results, three major themes continued to play out. Watching all three will help you keep track of your investment in the stock.

Five years ago, benign hysterectomies accounted for a huge swath of Intuitive's procedures. When the efficacy of those procedures was called into question, growth came to a standstill. 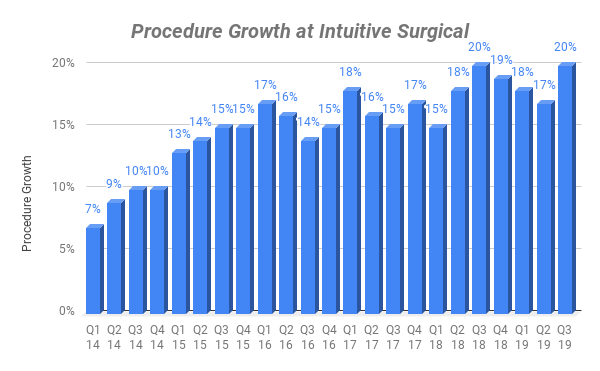 That growth has been two-pronged. There's U.S. general surgery, a catch-all category that has been spurred by tremendous growth in hernia and colorectal procedures. And in the conference call Thursday night, management also singled out cholecystectomy (gall bladder removal) as a "significant driver of incremental procedures."

The other source is international growth. As more countries start warming to the idea of robot-assisted surgery, growth has been impressive. For the third quarter, operations outside of the United States increased 23%, with particularly high growth of 40% in Japan.

2. Greasing the wheels for continued adoption

Much has been made recently of competition finally entering the industry. For a long time, Intuitive's main competition was simply from traditional laparoscopic procedures. But Medtronic changed that when it recently unveiled its own robotic surgical system.

It will be an uphill battle for Medtronic. At the end of the quarter, Intuitive's installed base of da Vinci machines stood at 5,406. Think about that: It represents tens of thousands of doctors who have spent millions of hours practicing and performing surgery with this platform. To switch to the competition, Medtronic would have to be offering something an order of magnitude better than da Vinci.

Even so, Intuitive is doing everything it can to get the machine into as many hospitals as possible. Over the past two years, that has meant creating operating lease agreements to sell its systems.

Sometimes, hospitals balk at buying a da Vinci. The selling price is often over $1.5 million -- a serious investment for U.S. hospitals, and even more so in developing economies. To help grease the wheels for continued adoption (read: market share), Intuitive offers financing that lowers these obstacles.

During the third quarter, Intuitive sold 275 systems. A full third of those were placed using alternative financing -- something that wasn't even considered a few years back. This is a shrewd move by management: While it may lower short-term profits, it raises the possibility for long-term dominance by locking in hospitals (and the recurring revenue their procedures generate) for the long haul.

The strength of Intuitive's balance sheet cannot be overlooked. The company ended the quarter with $5.4 billion in cash on hand versus zero long-term debt. And that was even after share repurchases, the acquisition of a smaller business, and investments to build up inventory.

Right now, non-GAAP earnings are growing slower than revenue: 21% versus 23%. Investors never like seeing that, since it's a sign that a company doesn't have leverage.

But with Intuitive, context is necessary. The company is aggressively reinvesting in international opportunities, as well as a spate of new products that are being released. If history is any indication, these could pay off handsomely. The bigger point: Despite those investments, Intuitive is a cash machine that should have no problem reinvesting for its future.

That's why, as a shareholder myself, I couldn't be happier with this report.