The industrial giant delivered another strong set of earnings and looks set for more growth in 2020.

In what will hopefully be a recurring theme in the current earnings season, Honeywell International's (HON -0.44%) latest quarterly results helped dispel the worst fears of investors, even as it's clear that the economy is slowing. The company managed to raise its full-year earnings forecast despite lowering full-year organic sales guidance. No matter; the results showed Honeywell doing what management said it would do, and that should be enough to take the stock higher in the current environment.

Here are the key takeaways for investors in Honeywell and blue chip stock peers like General Electric (GE -1.42%) and United Technologies (RTX 0.52%). 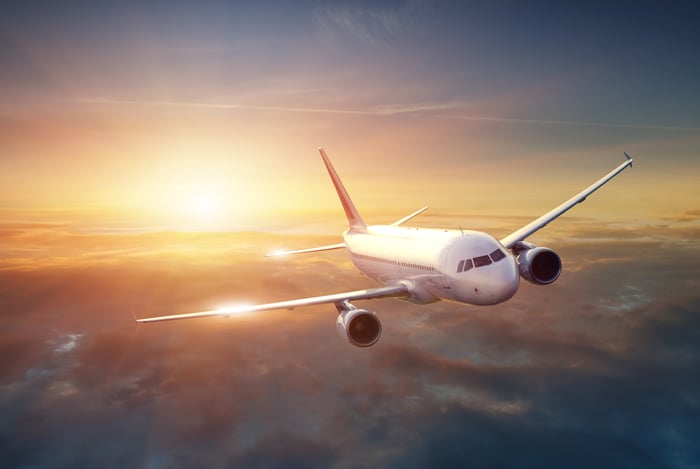 Management reduced the high end of its full-year organic sales growth forecast while raising the low end of earnings guidance. The latter was largely on the back of better-than-expected margin performance in the third quarter, which caused adjusted EPS to come in at $2.08 compared to guidance for $1.97-$2.02.

It's a good result, but as you can see below, Honeywell's growth rate is clearly slowing, and guidance for the fourth quarter merely confirms the current trend. 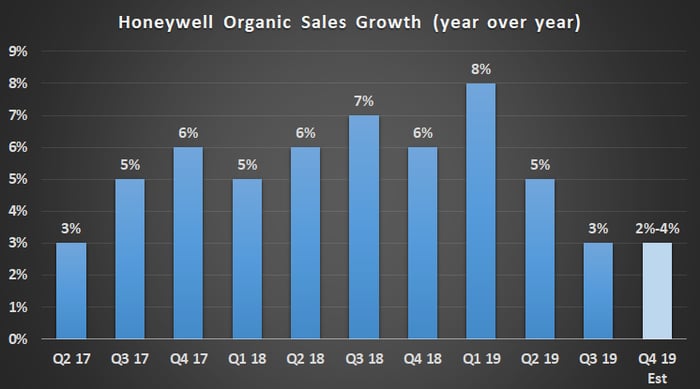 Indeed, the slowdown can be seen in the sharp decline in safety and productivity segment growth, with aerospace continuing to power the company's earnings higher. Nevertheless, the good news is that there's a key positive to be drawn from each segment.

It's been a great year for the aerospace aftermarket, with Honeywell, United Technologies, and General Electric all seeing their aerospace operations more than offset weakness elsewhere. However, going into the third quarter, there were some concerns that the commercial aerospace aftermarket could weaken as a consequence of a slower economy reducing passenger air miles flown growth.

The good news is commercial aftermarket grew 6% in the quarter and yet another strong performance from defense and space led to the fifth consecutive quarter of double-digit organic sales growth from the aerospace segment. This augurs well for United Technologies' and General Electric's earnings. 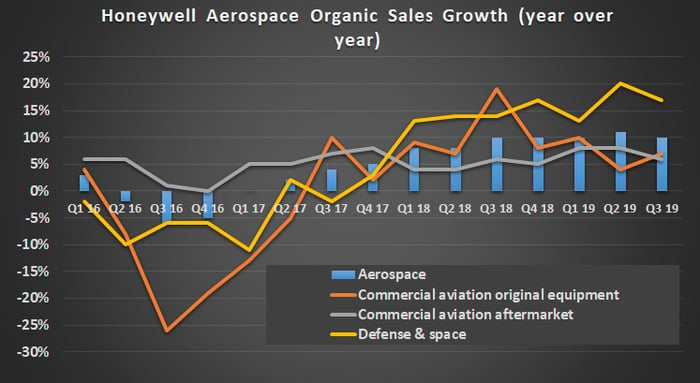 The management of one of Honeywell's process automation rivals, Emerson Electric, has been making ominous noises regarding the outlook for large project spending in the next couple of years.

In fact, Emerson Electric cut its full-year guidance in August, with CEO David Farr talking of caution among customers and a potential "slowdown lasting well into 2020."

However, none of this was apparent in Honeywell's organic sales increase of 7% in process solutions -- the third consecutive quarter of mid-single-digit growth. Perhaps Emerson Electric will surprise to the upside when it gives results in early November?

Building technologies' low-single-digit organic sales growth builds upon the 9% and 5% reported in the first two quarters and is a testament to how well the segment has performed since the separation of home products and distribution company Resideo Technologies.

The 3% sales increase may not seem like much, but the segment's building products growth was expected to do worse. Still, its performance suggests United Technologies' Carrier segment (owner of fire and security products company Kidde) might also report a good quarter.

It might seem surprising to talk of positives from a segment that reported an 8% drop in organic sales (safety was flat and productivity declined 13%), but there's evidence that top-line performance will turn around soon enough.

Honeywell's Intelligrated business (warehouse automation) has enjoyed very strong growth since its acquisition in 2016, and it's natural for a pause to come at some point. However, some major orders got pushed out in the second quarter and were expected to fall in the third and fourth quarters. Such delays can cause concern, but the good news is CEO Darius Adamczyk said they came in in September (Intelligrated orders were up more than 20% in the quarter) and are expected to contribute to strong growth in 2020. Moreover, the inventory destocking at productivity products appears to be slowing, and Adamczyk expects a return to growth in 2020.

All told, Honeywell's results were better than expected and could bode well for the upcoming earnings of its peers. Growth is slowing in the industrial economy, but that doesn't necessarily mean a recession is coming, and Honeywell's earnings help highlight the fact that opportunities are still out there.