Walmart (NYSE:WMT) bought a majority stake in leading Indian e-commerce company Flipkart last year for about $16 billion at a valuation of around $20 billion. Just over a year after closing the deal, Walmart may be about to make a major change to the company to unlock more value. It's planning to spin off PhonePe, the mobile payments app that Flipkart's been incubating.

The company is looking for a $10 billion valuation for the spinoff, according to a report from Economic Times. An investment banker in the know said the separated companies would be worth between $27 billion and $30 billion and Walmart would own 82% of each. That's a return of around 50% in just a few months. Not bad.

Of course, those are paper returns. Walmart isn't planning on selling off much (if any) of its stake in either company. But spinning off PhonePe from Flipkart could open the door for the payments app to grow even bigger and for Walmart to gain broader participation in India's burgeoning digital commerce market. 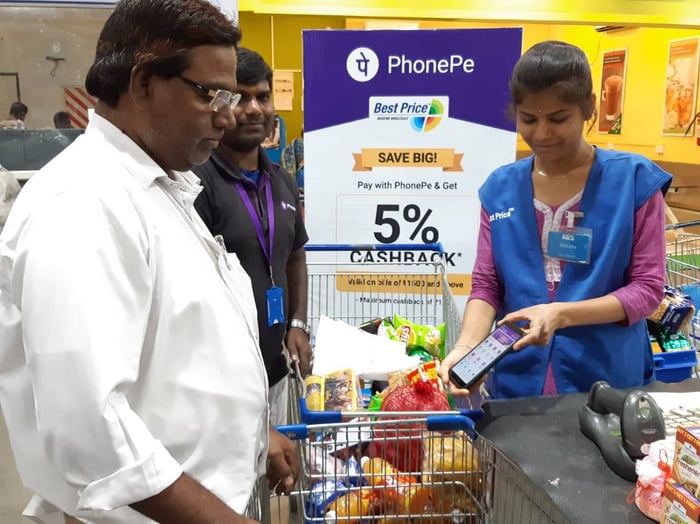 The payments space is getting crowded

The impetus for the spinoff is to allow existing Flipkart investors to cash out and to raise about $1 billion in capital for PhonePe to deploy. That's because the digital payments space in India is getting crowded.

The market's led by Paytm, which has quickly ramped up the number of merchants accepting payment through its digital wallet. It expects to reach 25 million merchants by the end of the year. By comparison, PhonePe only expects about 7 million to 8 million merchants in its network by December.

Paytm's parent company One97 recently said it's been investing about $1 billion per year to expand its ecosystem, and it'll step up that investment to nearly $1.5 billion per year over the next two years. PhonePe can use all the capital it can get in order to keep up.

Meanwhile, Google has managed to take the lead in peer-to-peer payments with Google Pay. The Alphabet (NASDAQ:GOOG) (NASDAQ:GOOGL) subsidiary said it now has 67 million active users in India. Last month, it announced a new app, Google Pay for Businesses, to enable small and medium-sized businesses to accept digital payments online without the need for an agent.

Both Amazon and Google have seen considerable growth thanks to giving consumers strong incentives in the form of cash back. Amazon has taken it a step further, giving Amazon Pay customers extra discounts on their orders from its marketplace.

The most recent big American tech company to enter the rapidly growing Indian digital payments market is Facebook (NASDAQ:FB). The WhatsApp owner introduced payments in its app to select users last year and it plans to roll out the service to all 400 million WhatsApp users in India by the end of the year. The company may have hit a regulatory roadblock that slows down its launch progress, but when it does roll out the feature, investors should expect a big investment along the same lines as Google and Amazon to grab market share.

With the increasing competition in the space, PhonePe could use some additional cash to invest in growing its user base and merchant network in order to stay ahead. And if Walmart can make that happen without using its own cash, so much the better.

The digital payments market in India will reach an estimated $1 trillion by 2023, according to Credit Suisse analysts. That's up from about $200 million in 2018. The majority of that growth will come from mobile as cheap wireless data and handsets become more accessible to India's population.

That's a massive opportunity for PhonePe, but it also means the competition is coming for that same opportunity. Walmart's move to spin off the digital wallet and enable it to grow well beyond Flipkart could help its 50% return on investment so far grow even more over the next few years.