Please ensure Javascript is enabled for purposes of website accessibility
Log In Help Join The Motley Fool
Free Article Join Over 1 Million Premium Members And Get More In-Depth Stock Guidance and Research
By James Brumley - Oct 21, 2019 at 9:45AM

Five Below partners with an esports network for in-store gaming as an alternate way to attract shoppers to its stores.

It's sounds pretty unusual, though not outright outlandish. Value-oriented "fun" retailer Five Below (FIVE -1.15%) is introducing esports game-play at a handful of stores beginning next year. If all goes well, more of the company's 850-plus locations will be adding 3,000-square-feet localhost spaces connected to their stores.

Details of the initiative are still scant, like how Five Below's gaming infrastructure partner, Nerd Street Gamers, will staff, manage, and promote these spaces -- particularly if the plan is to schedule regularly occurring esports events. It's also unclear where the densely stocked stores will find space for an esports venue without accessing added retail space.

Still, the company deserves kudos for thinking outside the box. Other retailers would be wise to embrace the same idea and offer their own spin on entertainment, even if just to underscore the point that e-commerce giant Amazon.com (AMZN -0.79%) can't do the same via the internet.

Welcome to the new era of retailing

"The partnership with [esports gaming network] Nerd Street Gamers is a unique opportunity to engage with an important and growing community of gamers in many of our locations across the country," explained Five Below CEO Joel Anderson when the announcement was made earlier this month. He added, "Gaming is a trend our younger customers are actively enjoying, and working with Nerd Street Gamers will help us to provide an exciting gaming experience that appeals to our core customers and beyond." 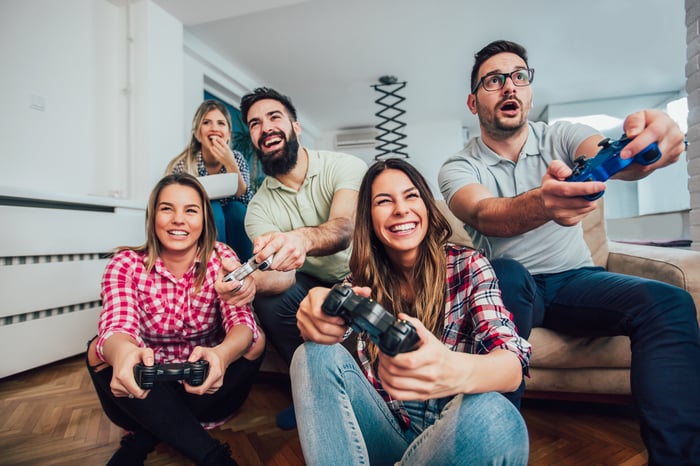 Five Below sells a variety of smartly curated goods ranging from toys to electronics to books to home furnishings, and more. Most items cost less than $5, making it easy for its customers to "let go & have fun," in turn making it easier for the retailer to deliver its intended "WOW" that rivals like Dollar Tree (DLTR -0.84%) and Dollar General (DG 0.10%) somehow can't.

Now its customers will have another reason to step foot in a store where they might make a purchase once they do.

It's not a completely unheard-of idea. GameStop is the sponsor of Complexity Gaming's 11,000-square-foot esports facility. Simon Property Group invested $5 million in Allied Esports in the middle of this year as a precursor to the establishment of competitive video gaming venues at some of its properties. And, if you look closely, several malls that are slowly being vacated by retailers are being repopulated by entertainment offerings like virtual reality experiences.

Other initiatives have been more direct and store-specific. The U.K.'s top-tier department store chain Selfridges operates an indoor skate park at one of its locales. The recently revived Toys R Us brand, which still hasn't reopened any stores of its own, is teaming up with Candytopia to create branded, interactive, candy-themed exhibits. The brand's present owners promise its new stores will be more immersive than its predecessors.

The underlying theme is clear -- shoppers are increasingly expecting to be entertained.

While the broad premise makes sense, creating an engaging experience in a retail space is much easier said than done.

"I think the majority of the stores are really still not that great, honestly," said Foot Locker VP of Global Retail Design Kambiz Hemati, speaking earlier this year about the future of retail in general. He went on to tell Retail Dive, "They've fallen behind and they've become complacent. I think a lot of it has to do because they just don't know what to do."

He's right. Many retailers are on the defensive, yet hesitant to steer away from the formula that worked so well through the 1990s.

The advent of the internet (and mobile internet, in particular) is largely responsible for that shift. Hemati goes on to say, "Before, people would come to the store and that was the first time they experienced whatever products and services that you sold. And now, I think one of the very big differences is, even before they come to the store, they already have done their research."

That leaves retailers in a position where they need to build a relationship with the consumers stepping foot in their stores. It hasn't been stores' strong suit, however, and the older the retailer, seemingly the weaker its ability to do so.

The irony: The younger the consumer, the more open they are to such relationships. A CrowdTwist survey from 2017 found that 57% of the generation Z crowd still prefer to shop in a store as opposed to online. Even more, most of those surveyed are members of at least one retail loyalty program.

A strategy worth mimicking

Five Below isn't breaking brand-new ground here, but it's one of the better efforts thus far to meld entertainment and retail aimed at the same basic crowd. Although in this case, it's as much about combating Family Dollar and Dollar Tree as it is about competing with Amazon and its budding online video gaming platform. For other store chains, the idea could be the last means available of standing up to the e-commerce giant.

If that's going to be the case, however, sooner is better than later. While Amazon's 500 Whole Foods grocery stores and planned conventional grocery store chain pose a threat to the grocery segment, it's hands-on bookstores that promote its own electronics and Amazon Go convenience stores are still nascent efforts. There's time for non-grocer retailers to build a moat against an Amazon incursion, but not a ton of it.

Bottom line? A whole slew of store chains have been on the defensive, but only because they weren't thinking creatively enough about how to use their selling space. Five Below's initiative in rethinking what draws foot traffic into a store may be a lesson some struggling retailers embrace as a means to sidestep the Amazon juggernaut or even a bigger brick-and-mortar rival.

John Mackey, CEO of Whole Foods Market, an Amazon subsidiary, is a member of The Motley Fool’s board of directors. James Brumley has no position in any of the stocks mentioned. The Motley Fool recommends Amazon, Five Below, and GameStop. The Motley Fool has a disclosure policy.