The company's current valuation makes it tough to love, but even a modest pullback could bolster the bullish argument

In retrospect, investors spent the last few months focused on the wrong thing. Rather than trying to figure out when the first mainstream beverage company might finally launch a cannabis-infused drink, we should have been focused on the newest beverage mania that actually was taking shape. A whole (relatively) new category of alcoholic beverages has taken that more adult piece of the beverage spectrum by storm, and brewer Boston Beer Company (SAM -4.30%) just secured its fourth upgrade in less than a month because of its stake in the nascent market.

All of them were a little late to the party, to be fair. Boston Beer shares have been advancing all year, up 62% since the end of 2018, largely on the heels of incredible demand for its Truly brand of hard seltzers. And although rival Anheuser-Busch InBev (BUD -0.89%) controls twice as much share of the hard seltzer market with its White Claw brand and drove 289% growth in sales volume last year, Boston Beer's Truly line of these seltzers saw 278% growth in volume in 2018.

The stock was performing well then, too. The end result is a valuation most investors might not like. Shares are priced at nearly 35 times next year's expected earnings.

The analyst rhetoric is on target with its seltzer-based expectations, though. Any meaningful setback for the stock could make for a healthy entry point, as seltzer mania appears here to stay.

What the heck is a hard seltzer?

What's a hard seltzer, sometimes called a spiked seltzer (though for the record, "Spiked Seltzer" is also a brand name)? It depends who you ask.

It's a carbonated beverage with alcohol in it, and regulated like beer. But it's not beer. It's usually fruit-flavored, low in calories, and drinkable in most settings and on most occasions. 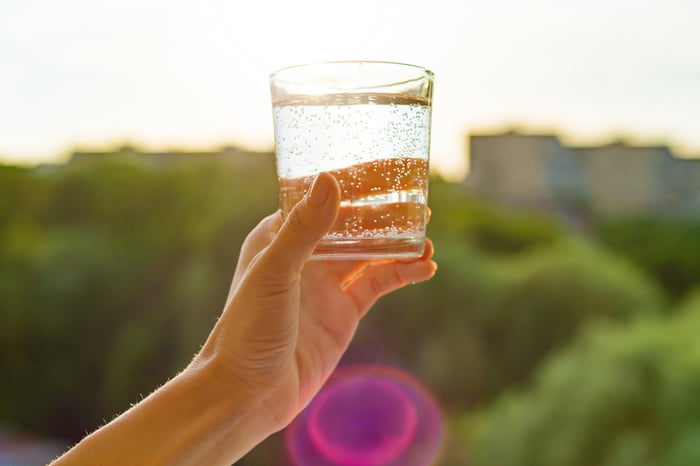 They've actually been around for years, but 2017 was a real coming out year for the category. Sales of hard seltzers soared by more than 600% between the middle of 2016 and midpoint of 2017, and as of August of this year, Nielsen said that trailing-12-month sales of the stuff were still up 189% on a year-over-year basis.

It's still not a lot. Last year's tally of $550 million is only a tiny fraction of the $35 billion worth of beer the United States drank in 2018. But even as the nation's beer sales continue to dwindle for a handful of reasons, UBS believes hard seltzer sales will grow to $2.5 billion by 2021, now that the category has reached a critical mass.

It's that rising tide that's drawn much fresh bullish interest in the nation's No. 2 name in hard seltzers. Although there are concerns that newcomers like a Corona-branded seltzer from Constellation Brands (STZ -4.55%) and widened interest in existing alternatives like Molson Coors' (TAP -1.51%) Henry's brand of hard seltzers are legitimate, Boston Beer has highlighted the segment and the tide is rising so fast that Boston Beer is unlikely to lose share.

Cowen analyst Vivien Azer was the latest to chime in, upgrading Boston Beer to outperform: "[W]ith Truly continuing to drive outsized growth for SAM, and with new formulations and a lemonade line extension slated for next year, we believe Truly will continue to transform SAM's growth algorithm, and offset continued softness in beer and cider."

The premise echoes something Citi analyst Wendy Nicholson expressed a week earlier when she upgraded rival Boston Beer to a buy, explaining, "[W]e believe that overall, the hard seltzer category will continue to grow at a double-digit rate for as far as we can see."

Guggenheim analyst Laurent Grandet is also a fan of Boston Beer and its biggest hard-seltzer rival Anheuser-Busch, which makes the White Claw brand of hard seltzers. She noted, "Truly is far outpacing our estimates with additional room to run next year, even as White Claw remains the category leader."

The theme is undeniable.

Just wait for the fizz to slow down

In the shadow of such bullishness, it's difficult to exercise restraint, as the fear of missing out can be greater than the fear of stepping in at a frothy price.

It was BMO analyst Amit Sharma who brought some reason to the table a month ago, though, when he commented along with his upgrade that, "SAM is one of the rare staples growth investments that doesn't require a sizable multiple expansion to 'work' as merely a better assessment of its growth potential signals material upside from current levels."

Sharma didn't numerically detail what he meant by "require a sizable multiple expansion," and whatever valuation multiple nagged at him has only worsened thanks to the 13% gain SAM shares have made since BMO's upgrade in late September. It's pretty clear, however, that he's not calling for a monster-sized setback in the stock's price. A modest dip would be enough to serve as an entry window.