Please ensure Javascript is enabled for purposes of website accessibility
Log In Help Join The Motley Fool
Free Article Join Over 1 Million Premium Members And Get More In-Depth Stock Guidance and Research
By Pearl Wang - Oct 22, 2019 at 9:53AM

With strong execution and the shares’ recent dip, this global coffee chain is looking good.

Ahead of its fourth quarter earnings release on Oct. 30, Starbucks' (SBUX 1.19%) two major long-term growth markets -- the Americas and China -- appear to be performing well.

However, Starbucks' stock price has lost steam recently, shedding 6% over the last month. Given the stock's dip, this may be a good time to consider adding shares of Starbucks to your portfolio. 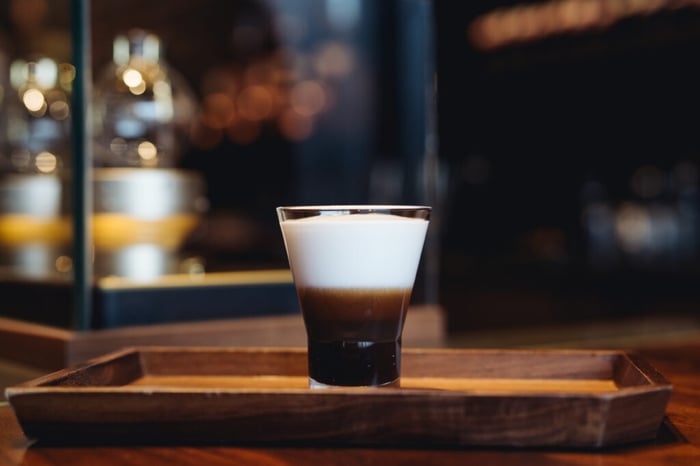 The core business is on track, helped by popular new offerings

Wall Street keep tabs on Starbucks throughout the year, and recent data show that traffic and sales trends in the Americas were strong during the most recent quarter, with some analysts raising their quarterly Americas comparable sales growth estimates above the 4.4% consensus. The company is benefiting from product launches and positive seasonal weather trends.

Nitro Cold Brew -- a customer favorite -- was scheduled to roll out to all U.S. company-operated stores by the end of the fiscal fourth quarter, likely giving the region a boost. CEO Kevin Johnson said stores offering the Nitro product in 2017 enjoyed "one point of comp growth."

Starbucks store traffic benefited from an earlier introduction of its popular Pumpkin Spice Latte at the end of August. Placer.ai data shows that the company saw a 19% increase in customer traffic during the weekend the seasonal beverage became available in stores. Typically, Starbucks experiences a summer traffic slump through early September, so the earlier roll out was a smart, traffic-boosting move.

Starbucks continues to be a top destination for U.S. teen spending

American teens named Starbucks as their second favorite food and drink destination in Piper Jaffray's latest Taking Stock with Teens survey. Starbucks has come in first or second place in the survey for the last five years, and the food and drink category is the area where teens spend the most money.

The survey results show the strength of Starbucks' brand and the high level of customer loyalty the company commands among an increasingly important customer demographic. As this group's spending power grows over time, Starbuck's sales will benefit.

International expansion in China will continue to support growth

Just as China has become a hot market for investors, it continues to be an important market for Starbucks as well. While the country is still dominated by tea drinkers, the middle-class Chinese consumer is increasingly turning to coffee for her caffeine fix, driving up coffee consumption. There's an abundance of future growth in coffee beverage sales in China, given that the average person consumes only three cups of coffee per year versus 363 cups for the average U.S. consumer. Statista sees spending on coffee in China increasing by 11% annually over the next four years.

Starbucks is deftly capitalizing on this market opportunity with plans to add about 3,000 new stores in China over the next five years -- a new store every 15 hours -- nearly doubling the current number. That will bring the company closer to its goal of operating 10,000 stores in the market within the next 10 years.

However, there are concerns around increased competition in the region. Luckin Coffee is a fast-growing chain of small cafes and kiosks that has about 2,000 locations. McDonald's, Costa Coffee, and a variety of convenience stores are also vying for consumers' coffee dollars. But Starbucks has managed to set itself apart by offering an up-market experience. Not just somewhere to grab a cup of coffee, Starbucks' Chinese stores are marketed as high-end meeting locations. And this premium branding appears to be working, as revenue for the China/Asia Pacific region grew 9% year over year in each of the last two quarters.

Overall, shares of Starbucks look appealing, and sales in the company's core markets are tracking well. Looking ahead, another good reason to own Starbucks is the somewhat defensive nature of coffee consumption. "Coffee is quite anti-cyclical, so even if the economy slowed down, there is still a good reason to drink coffee," said Andrea Illy, chairman of Illycaffe, a large Italian coffee roasting company. Starbucks CEO also commented at the end of August that he did not see a consumer slowdown at present. However, investors should look for any updates on the state of coffee consumption in the upcoming earnings release.