Wall Street analysts have been warming back up to Apple (NASDAQ:AAPL) recently, particularly as demand for the iPhone 11 is proving to be stronger than initially expected. That bullishness helped the Mac maker reclaim the crown of most valuable public company from longtime rival Microsoft a few days ago. One analyst thinks Apple shares are set to climb even higher still. 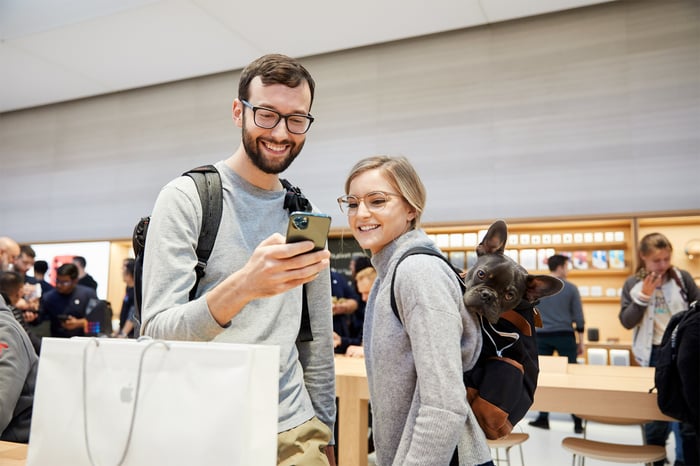 The iPhone 11 lineup has been selling better than expected. Image source: Apple.

Raymond James kicked off the week by reiterating an outperform rating on Apple stock while boosting its price target from $250 to $280 -- the highest on Wall Street. That would put Apple's market cap at nearly $1.3 trillion based on current shares outstanding, although share repurchase activity will inevitably reduce that figure.

Analyst Chris Caso believes the company's prospects have stabilized. Apple had started 2019 by warning of a massive revenue shortfall, dramatically missing its guidance due to a slew of factors including China's macroeconomic slowdown and poor iPhone upgrade activity.

"We are now getting our estimates in line with the more favorable near-term checks for the iPhone 11 cycle," Caso wrote in a research note to investors. "More stable near-term conditions coupled with the launch of a new SE model in early 2020 create a bridge to the 5G cycle, which we believe will continue to squeeze the stock higher."

Caso believes that the iPhone SE 2 will launch in late March and that the mid-range model will fetch an average selling price (ASP) of approximately $450. The Cupertino tech juggernaut may also phase out the iPhone 7 and iPhone 8 around the same time, according to Raymond James, which may incrementally push the product mix toward the iPhone XR.

5G is still expected to be the headline feature in the 2020 flagship iPhones, which Caso believes will help drive demand for a couple years. "We increasingly view the 5G opportunity as a two-year cycle, with 5G representing an estimated 40% of mix in the fall 2020 cycle, growing to the vast majority in the 2021 cycle," the analyst added.

Smartphone upgrade cycles continue to get longer and are now approaching three years, according to recent estimates from Strategy Analytics. Consumers that bought iPhones in 2018 or 2019 may not be due for upgrades in 2020. That's partially why Raymond James is especially bullish for fiscal 2021, which may see overall revenue growth return to double-digit territory, according to Caso's modeling.

Apple is preparing to report fiscal fourth-quarter earnings next week on Oct. 30, which will be followed by the launch of Apple TV+ a couple days later on Nov. 1.