Lyft predicts "profits," and Hasbro gets slammed by tariffs.

The major stock indices were mixed on Tuesday afternoon as earnings reports continued to roll in. Uncertainty in the U.K. regarding Brexit probably isn't helping.

Shares of Lyft (LYFT -5.54%) got a boost on Tuesday when management predicted that the ridesharing company would be "profitable" by the end of 2021, while Hasbro (HAS -0.45%) stock sank as tariffs wreaked havoc on the toy company's results.

Lyft sees profits in 2021, but only if you squint really hard

Ridesharing company Lyft is not even close to being profitable. The company lost $197 million on an adjusted net income basis in the second quarter, on revenue of $867 million. Revenue was up 72% year over year, but growth without profits hasn't been enough for investors. Shares of Lyft are down more than 40% from their 52-week high.

The stock got a boost on Tuesday when Lyft co-founders Logan Green and John Zimmer predicted that the company would turn its first "profit" by the end of 2021. In an interview at The Wall Street Journal's WSJ Tech D.Live conference, Green said that the company will be profitable on an adjusted-EBITDA basis by the fourth quarter of 2021. That's a year earlier than analysts were expecting. 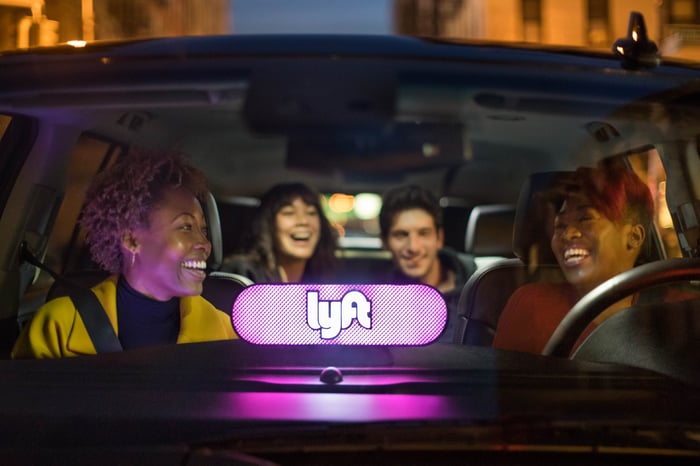 Here's the thing: Being profitable on an adjusted-EBITDA basis is not the same thing as being profitable. EBITDA -- which stands for earnings before interest, taxes, depreciation, and amortization -- is a nonsense metric that means very little. Adjusting EBITDA further, to back out stock-based compensation, makes it even more suspect.

Back in 2002, Warren Buffett lambasted EBITDA during the Berkshire Hathaway annual meeting: "[S]o when people start talking about that sort of thing [EBITDA], either they're trying to con you in some way, or they've conned themselves, to a great degree."

Lyft will not be profitable in any meaningful sense of the word by 2021. But with the stock down so much, even news that's only ostensibly positive was enough to send shares higher. Lyft stock had gained 10.4% by 1:50 p.m. EDT, making up a small portion of its losses.

Toy company Hasbro ran into some trouble in the third quarter. Revenue barely increased at all, and adjusted earnings per share declined. The company missed analyst estimates badly on both fronts, sending the stock down 15.5% by 1:50 p.m. EDT.

Hasbro still expects to produce revenue growth for the full year, but tariffs are taking a toll. "[A]s we've communicated, the threat and enactment of tariffs reduced revenues in the third quarter and increased expenses to deliver product to retail," said CEO Brian Goldner in prepared remarks included in the earnings release.

Revenue of $1.58 billion fell short of analyst estimates by $130 million. Adjusted earnings per share of $1.84 was $0.36 below expectations. The partner brands segment was a silver lining, with 40% revenue growth driven by Disney-related merchandising. But franchise brands revenue was down 8%, and gaming revenue tumbled 17%.

If the trade war between the U.S. and China isn't resolved soon, Hasbro's results will continue to suffer.