It's been a volatile year for both NVIDIA (NASDAQ:NVDA) and Qualcomm (NASDAQ:QCOM). Both companies have faced challenges, and yet they've still been performing very well so far in 2019, with Qualcomm up 39% year to date and NVIDIA up 47%. However, both companies are facing challenges that investors should consider before making an investment decision. Let's take a closer look at which of these two stocks is the better buy today.

Declining gaming revenue has been a big problem for NVIDIA

Last year was a tough one for NVIDIA, as the stock fell more than 33%. The company got involved in cryptomining and it didn't end up paying off in the end, with sales for the segment suddenly not looking so good anymore. Not being as exposed to crypto in 2019, NVIDIA's stock has been able to recover and it has made up for those losses, but how much higher the stock will rise will depend on how well the company will be able to address concerns about its growth.

While NVIDIA beat earnings and revenue expectations in its most recent quarterly results, the bigger issue is that revenue is down from where it was a year ago. In particular, the gaming segment, which is a big part of NVIDIA's business, has not been performing well of late.

Gaming revenue was $1.3 billion in the most recent quarter, down from $1.8 billion in the prior-year period, a decline of more than 27%. And the segment has also taken up a smaller piece of the pie, making up 51% of the company's top line this past quarter compared to 58% a year ago. The company blames fewer gaming desktops being shipped as a key reason for the decline. 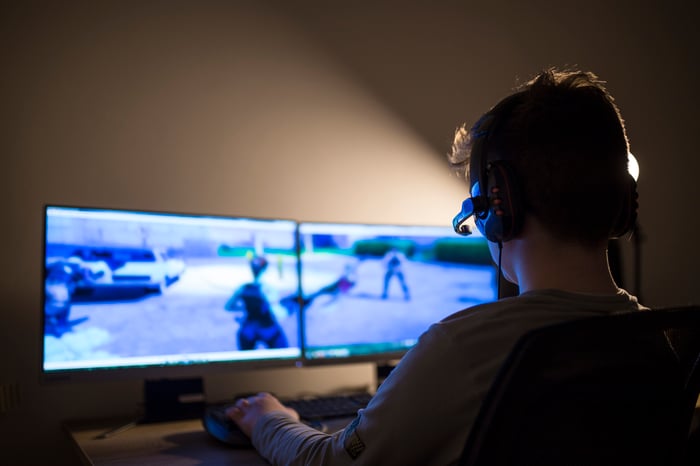 Anytime you see a company's core business struggling, it can be a cause for concern. And especially with the stock trading at 44 times earnings and more than 11 times book value, it's a hefty price for investors to pay for a company with some big question marks ahead, namely, how it will be able to make up for a drop in sales.

Antitrust and other issues have weighed heavily on Qualcomm

Qualcomm is also recovering from a disappointing 2018, when its share price had a much more modest decline of 13%. But returns of more than 35% so far in 2019 have made up for those struggles. However, it's been a bumpy ride, to say the least, for Qualcomm to have gotten to where it is today.

Although the company beat earnings expectations in its most recent quarter, sales came in well short of expectations, at $4.89 billion versus $5.08 billion that analysts were expecting. Investors were also likely disappointed that its guidance was looking a little soft, with Q3 adjusted EPS expected to come in between $0.65 and $0.75, rather than the $1.08 that analysts were estimating. Revenue estimates are also looking underwhelming at $4.3 billion, nowhere near expectations of $5.63 billion.

The big boost that the company's shares have gotten this year was primarily as a result of its royalty dispute with Apple finally reaching a resolution. Unfortunately, the issue wasn't put to rest because in May, Qualcomm lost an antitrust case related to its licensing fees as a whole, affecting not only Apple but other customers as well. The judge ruled that Qualcomm had effectively been abusing its position and using the leverage it had to charge excessive royalties for its chips.

While an agreement with Apple is definitely desirable for investors, the judge's ruling puts some serious doubt as to how much Qualcomm will be able to earn from its licenses, and that could have a big impact on its sales growth. While the business will keep going, it's definitely taken a hit.

Why NVIDIA is my pick

Although NVIDIA is facing some challenges, it looks like the safer bet today for investors. Gaming is not going out of style anytime soon, and although NVIDIA may be a more expensive buy today, another profitable quarter should go a long way in bringing down its price-to-earnings multiple. Qualcomm, however, faces bigger uncertainty as it's questionable how profitable the company will be in light of the antitrust case.

Both these tech stocks have done well this year, and while both have questions surrounding their growth, NVIDIA looks like the safer of the two as Qualcomm could prove to be more of a headache than it's worth.