Please ensure Javascript is enabled for purposes of website accessibility
Log In Help Join The Motley Fool
Free Article Join Over 1 Million Premium Members And Get More In-Depth Stock Guidance and Research
By John Rosevear - Updated Oct 24, 2019 at 7:19AM

Ford Motor Company (F -3.74%) reported third-quarter net income of $425 million, down from $991 million in the third quarter of 2018, as one-time charges related to restructuring actions in Europe and India weighed.

Excluding those one-time charges, Ford earned $0.34 per share, up from $0.29 per share a year ago and above Wall Street's consensus estimate. Wall Street analysts polled by Thomson Reuters had expected Ford to report adjusted earnings of $0.26 per share. Ford's automotive-segment revenue was $33.93 billion, down from $34.66 billion a year ago and slightly short of Wall Street's estimate of $34.09 billion.

Ford also cut its full-year earnings guidance on growing concerns about weakness in the North American and Chinese markets. Shares fell in after-hours trading after the news was released. 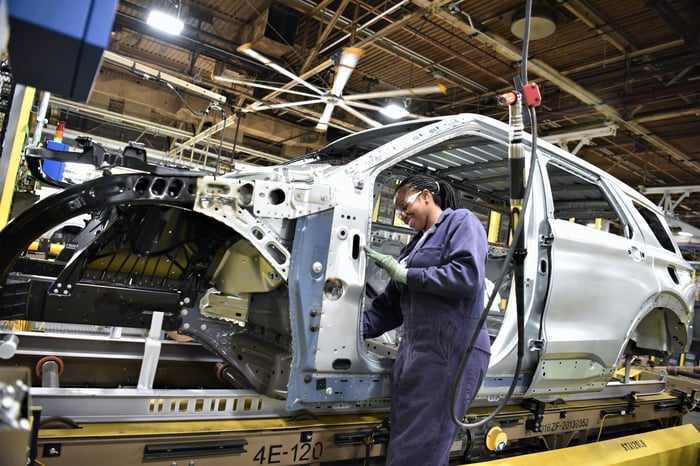 Here are the key numbers from Ford's third-quarter 2019 results.

All financial results in this section are reported on an EBIT basis, except as noted.

North America:  Ford earned $2.01 billion in North America, up $52 million from the third quarter of 2018. Revenue rose 5% to $23.4 billion, but wholesale shipments fell slightly from a year ago, to about 639,000. U.S. sales fell 4.9% in the quarter on tight supplies of the all-new 2020 Explorer amid early production snags; in an interview, CFO Tim Stone said that Explorer is now "nearly" at full production.

Ford North America's EBIT margin, a number widely watched by Ford investors, was 8.6% in the third quarter. That's a decline of 0.2 percentage points from a year ago, but still a solid result.

South America: Ford lost $165 million in South America, versus $152 million a year ago. Revenue fell 19% to $1.0 billion on a 16% decline in wholesale shipments after Ford shut down its heavy-truck business in the region.

China: Ford lost $281 million in China in the third quarter, an improvement of $97 million from a year ago, as pricing and cost improvements more than offset a 30% year-over-year decline in sales.

Middle East and Africa: Ford lost $27 million here, versus a profit of $47 million a year ago. Revenue fell 2% on a 4% drop in wholesale shipments.

Ford Credit: Ford's captive-finance subsidiary earned $736 million in pre-tax profit, up 9% from $678 million in the third quarter of last year. Credit and loss metrics remain strong, roughly unchanged from last year; auction values are down slightly from a year ago, but trending a bit above Ford's expectations.

Stone said that Ford now expects "headwinds" -- including recall costs, higher incentives in the U.S., and lower sales in China -- to have a greater effect in the fourth quarter than it had anticipated when it last updated its full-year guidance in July.

As a result, Ford cut its earnings guidance once again. It now expects:

But despite the headwinds, Stone said that Ford still expects its full-year adjusted free cash flow to exceed its 2018 result ($2.8 billion), unchanged from earlier guidance.