Please ensure Javascript is enabled for purposes of website accessibility
Log In Help Join The Motley Fool
Free Article Join Over 1 Million Premium Members And Get More In-Depth Stock Guidance and Research
By Rich Duprey - Oct 23, 2019 at 10:43AM

Sales still fell for the period, just not as far as everyone was expecting.

Harley-Davidson (HOG 0.43%) posted surprisingly better sales numbers in the third quarter than analysts expected, though they still fell, and profits plunged 24% from the year-ago period.

The motorcycle giant's less-bad results don't mean it's regaining its balance, regardless of what management says. But it was a welcome respite from the constant drumbeat of overly negative news. 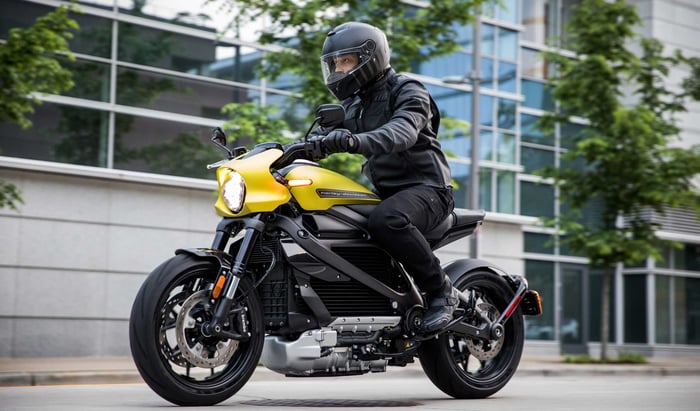 Better results than its biggest rival

Revenue fell 5% in the third quarter as U.S. motorcycle sales declined 3.6% while international sales rebounded and grew 2.7% for the quarter. Still, it was the 11th consecutive quarterly decline in U.S. sales and the 19th out of the last 20 that they have been down. Also, the industry only declined 1.7% for the period.

The result, though, was better than anticipated, and certainly better than rival Polaris Industries (PII -1.11%), as sales of its Indian Motorcycle brand were down by double-digit percentages. But it was not a performance that Harley investors should celebrate.

CEO Matt Levatich said, "We are driving stability in our business and bringing data insights and intensified consumer focus to guide our efforts to build committed riders and meet our near- and long-term objectives."

It remains to be seen whether the improvements will continue as Harley has had periods before where the declines seemed to be ameliorated only to worsen again the next quarter. And it doesn't help that the bike maker bungled its handling of the rollout of the LiveWire electric motorcycle.

It was expected that the shutdown of production and delivery of the LiveWire would overshadow whatever earnings results Harley-Davidson issued, but the misfire seems to have been little more than a speed bump as the halt lasted only about a week or so.

The problem was discovered in a single bike as it rolled off the assembly line. But out of an abundance of caution, Harley called for a full work stoppage to analyze the occurrence. After it confirmed it was limited to that one bike, Harley geared up production and shipments again.

Yet Harley could have handled it better. By being secretive about the issue, which ultimately turned out to be a problem with a single motorcycle, it risked damaging the reputation of the LiveWire. In fact, it still hasn't admitted it was a problem with the Level 1 overnight charging system, though the caution to dealers to only use the Level 3 fast-charge stations at dealerships suggested as much.

While the incident is now likely to become a footnote to the rollout of the LiveWire, it's still not expected to generate many sales, with analysts predicting only 400 to 1,600 will be sold in its first year due to the sticker shock from the $30,000 price tag.

Harley recently changed its objective on international sales, going from wanting foreign markets to account for half of its volume by 2027 to half of its revenue. Still, the third quarter's turnaround is remarkable because of the headwinds Harley faced with tariffs and having to shift production around to mitigate their impact.

Harley still needs to prove itself

The third-quarter performance was indeed better, but investors have been down this road before with Harley-Davidson. It's now heading into its two weakest quarters, and though the bike maker reiterated it will ship between 212,000 and 217,000 motorcycles this year, that's still down 5% to 7% from last year.

It also suggests fourth-quarter shipments will end up between being flat year over year (actually slightly higher) to down by as much as 11%, a range big enough to drive a tractor-trailer full of Harleys through. The problem is, we're still not seeing growth.