Please ensure Javascript is enabled for purposes of website accessibility
Log In Help Join The Motley Fool
Free Article Join Over 1 Million Premium Members And Get More In-Depth Stock Guidance and Research
By Steve Symington - Updated Oct 28, 2019 at 10:06AM

As expected, the home robotics leader's domestic sales struggled in Q3. Here's how iRobot is responding.

When iRobot (IRBT 0.05%) released its second-quarter 2019 results in July, the home robotics specialist warned that sales in its key U.S. market were off to a softer-than-expected start in the second half due to the "direct and indirect impacts" of tariffs and the U.S.-China trade war.

Sure enough, that trend was evident in iRobot's just-announced Q3 results Tuesday after the markets closed -- and shares of the Roomba maker are down around 18% in after-hours trading as of this writing.

But iRobot also has a plan to ensure it remains a primary beneficiary of the budding home robotics market for years to come. So, before you sweep iRobot stock into the dustbin, let's more closely inspect what the company had to say about both its Q3 report and guidance looking forward.

On one hand, iRobot's year-over-year revenue growth this quarter was driven by a 25% increase from international markets, to $171.5 million, notably including 40% growth in Japan and a 27% increase in the Europe, Middle East, and Africa (EMEA) region. This strength was largely driven by the planned international launches of iRobot's newest Roomba s9 robotic vacuum and Braava jet m6 floor-mopping bots, which are capable of working together to coordinate their respective cleaning duties.

On the other hand, revenue declined 7% in the U.S., to $117.9 million -- and that's even after accounting for what iRobot Chairman and CEO Colin Angle described as "a large shipment to a major U.S. retailer that was previously planned for the fourth quarter." 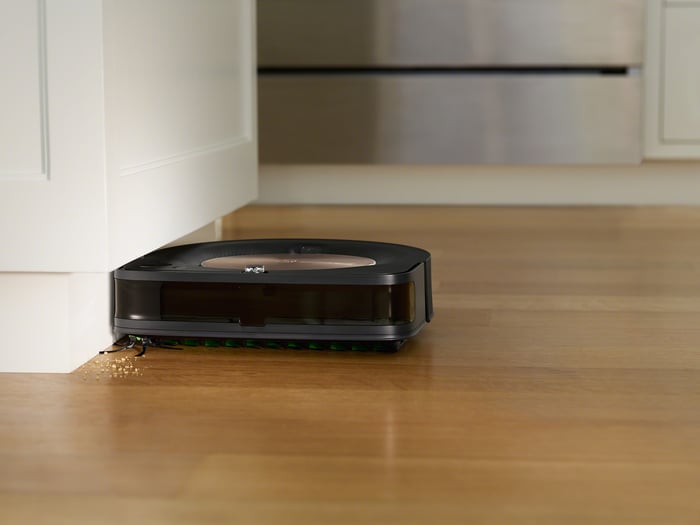 On the bottom line, after adjusting for items like stock-based compensation and acquisition expenses, iRobot's (non-GAAP) earnings arrived at $43 million, or $1.50 per share, up from $1.34 per share in the same year-ago period.

In any case -- and this helps explain iRobot's initial rise in the early minutes after its press release hit the wires -- most analysts were modeling far lower earnings of $0.52 per share on revenue of only $259.4 million.

Angle elaborated on the negative impact of iRobot's recent price increases, which were designed to partially offset the cost of tariffs (emphasis mine):

Despite the severity of U.S. tariffs on robotic vacuum cleaners, and the direct and indirect disruptions they are having on U.S. category growth, we remain committed to delivering exceptional value to consumers and are mobilizing accordingly. Although our third-quarter results were strong, sell-through following our late July price increases was suboptimal. Given this outcome and our belief that the RVC category was at a growth inflection point prior to tariffs, we elected to roll back our pricing to pre-tariff levels on most of our products. We believe this action, in combination with robust investment in R&D and our go-to-market activities, will help us defend our category leadership.

In early 2018, Angle pointed out that global household penetration of robotic vacuums was still "extremely low, in the single digits." So, he told investors at the time that "with the market accelerating in its growth and competitive pressure coming into the markets, [...]" iRobot made the decision to prioritize top-line growth, maintaining market share, and investing in R&D rather than letting excess earnings fall to the bottom line.

Perhaps most relevant to iRobot's third-quarter results this week, Angle also predicted in early 2018: "This is a movement in time where over the next three years the true winners in the consumer robot industry are going to be determined for the next decade."

Of course, there are now closer to 1.5 years remaining in iRobot's self-imposed three-year time frame for establishing what could be a decade's worth of market leadership. But judging by Angle's latest words and iRobot's move to revert back to pre-tariff pricing, it seems clear that the company continues to believe now is a crucial time to prioritize maintaining market share via a combination of attractive pricing and heavy R&D investments.

To that end, just last week iRobot also demonstrated its willingness to enforce its enviable IP portfolio, filing a motion for a preliminary injunction against recent market entrant Shark over its alleged violation of several key iRobot patents.

On the Terra lawnmower launch

Management also offered fresh color on the impending launch of Terra, iRobot's first robotic lawnmower. According to Angle during the subsequent conference call, the company will soon conclude its beta trial of Terra in Germany, which will be followed by online sales in the country starting in 2020. The Terra team also recently began a smaller, "closely controlled beta" of Terra here in the U.S. that should run through the end of this month.

"We are now putting the sales, marketing, and operational plans in place to support limited U.S. online sales of Terra next year," Angle said, adding that their primary focus is currently on improving Terra's software. "[...] We believe that our learnings over the coming quarters and related software enhancements will set the stage for larger-scale commercial launches in the spring of 2021."

That's fair enough, though some investors will undoubtedly find this timetable disappointing considering previous reports indicated a broader commercial launch of Terra in 2020.

While not entirely disheartening, each of those guidance revisions admittedly skewed toward the negative ends of iRobot's prior outlook ranges. But with echoes of early 2018 ringing clear, that's largely a symptom of iRobot's strategic shift back toward solidifying its dominance in these early stages of the home robotics industry.

With shares already down nearly 60% from its 52-week high leading into this report, I suspect the stock's nearly 20% after-hours plunge will prove to be a disproportionate punishment by the market for iRobot's current headwinds. Thus, if the drop is still holding when my Motley Fool trade restrictions are satisfied, I fully intend to add to my position later this week.